When I say "it will generate a lot of non compostable rubbish"...

I get this a lot with one-off gardening jobs: someone calls me in to retrieve their garden before it gets too wild, and I hear myself asking them how they will get rid of the rubbish generated, as I don't have a Waste Licence.

I could get one, they only cost £30 a year, but I would have to take the garden waste up to a special site, a round trip of about 35 miles, and I would have to pay a further £20 per tonne for the actual disposal. Per tonne!  How am I supposed to accumulate and store a tonne of non-compostable garden waste such as prunings - famous for being massively bulky without generally being heavy - and when I have done so, how am I supposed to get them there? In my tiny little car?

So no, I don't have a waste licence, nor am I likely to. Clients have to dispose of their own waste: my regulars all have lots of compost heaps (I see to that!), they usually also have leaf mould pens, and they certainly have a bonfire pile. If I interview a client who doesn't have a bonfire pile, but who says casually "Oh, don't worry, I'll take anything you can't compost down to the tip", I'm afraid that I generally don't take on the job. 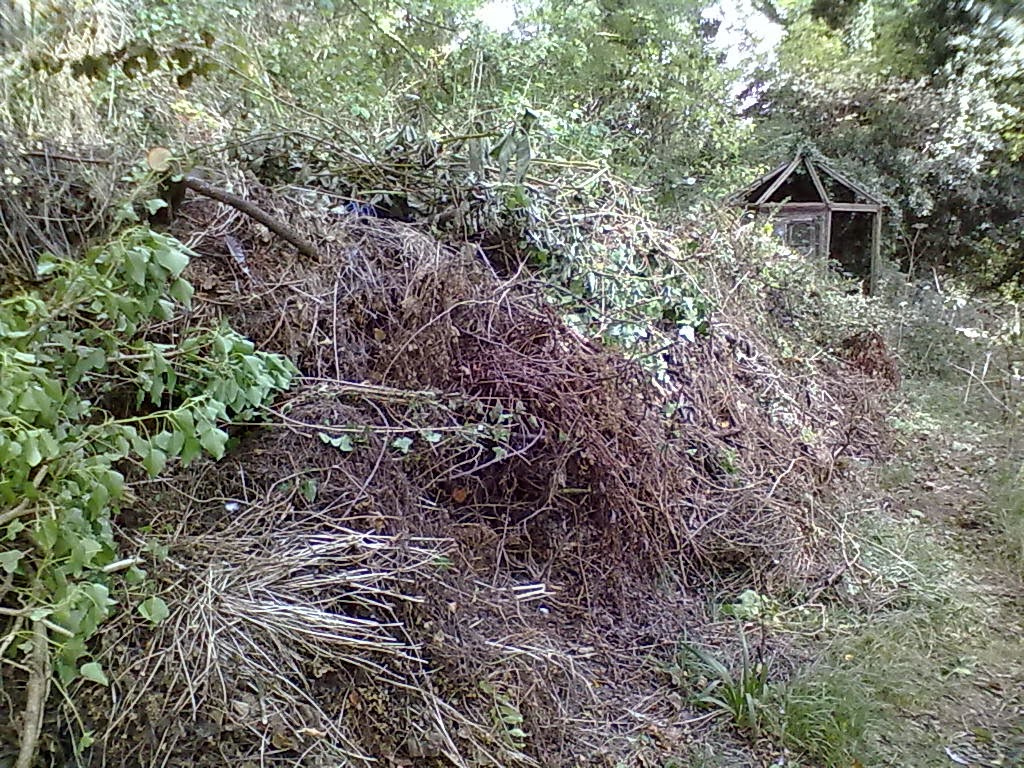 Impressive, huh? Nearly as high as the ruined summerhouse, ten feet wide, and at least five or six yards long. This is about four months' worth since the last bonfire...

This material is made up of:

1) hard woody/shrubby material that won't compost  - although if you had a shredder and some patience, you could reduce the bulk and produce chippings which could be left in a neat heap to compost themselves: I would not add them to a traditional compost heap, I'd let them rot separately.

2) Herbaceous material cut down over winter, which contains too many seed-heads to risk putting it on the compost.  You could chop off all the tops and put just the stalks on the compost, but it's very time-consuming and somewhat tedious to do that. Includes things like asters, aquilegia - anything with a lot of seeds on top.

3) Pernicious weeds such as lemon balm, comfrey - things that tend to re-root themselves in the compost. Also includes the roots of bindweed, ground elder, nettles etc which, if put on the compost, would consider themselves to have been "planted" and would grow.

4) Nasty spiky stuff ie brambles, which are unpleasant to handle, don't rot even when shredded,  and are better burnt.

All these materials can't go on the compost heap, need to be disposed of, and would take a lot of time and effort to transport to the tip.


Now, I can hear you saying that a one-off job won't produce that mountain of waste, and you are right, but any overgrown garden will produce much more waste than the owner would think possible, and I am not comfortable with being blamed for it.  I was accosted once by a one-off Client from several months earlier, who complained that they were still working their way through the heaps of waste that I had left them - oops! Well, I did warn them...

... and now, as mentioned above, I will often regretfully refuse to take on such jobs. Instead, I sometimes recommend that they call in a "landscaping" firm who will slaughter everything and take away the mess, leaving the garden somewhat denuded, but at least it's clear, empty of waste, and the owner can then get to work on restoring it, or employing a proper gardener to replant and make it beautiful again.

Posted by Rachel the Gardener at 10:47