I love feeding the little birdies through the winter, it's a constant, daily joy to watch them coming to the bird feeder on cold mornings, while I am eating my breakfast.

Like most people, I prefer the "nice" birds: robins are always welcome, as are blackbirds, although they rarely fly up to the feeder, preferring to feed on the ground, as do the dunnocks (which look rather like sparrows, until you get used to them). 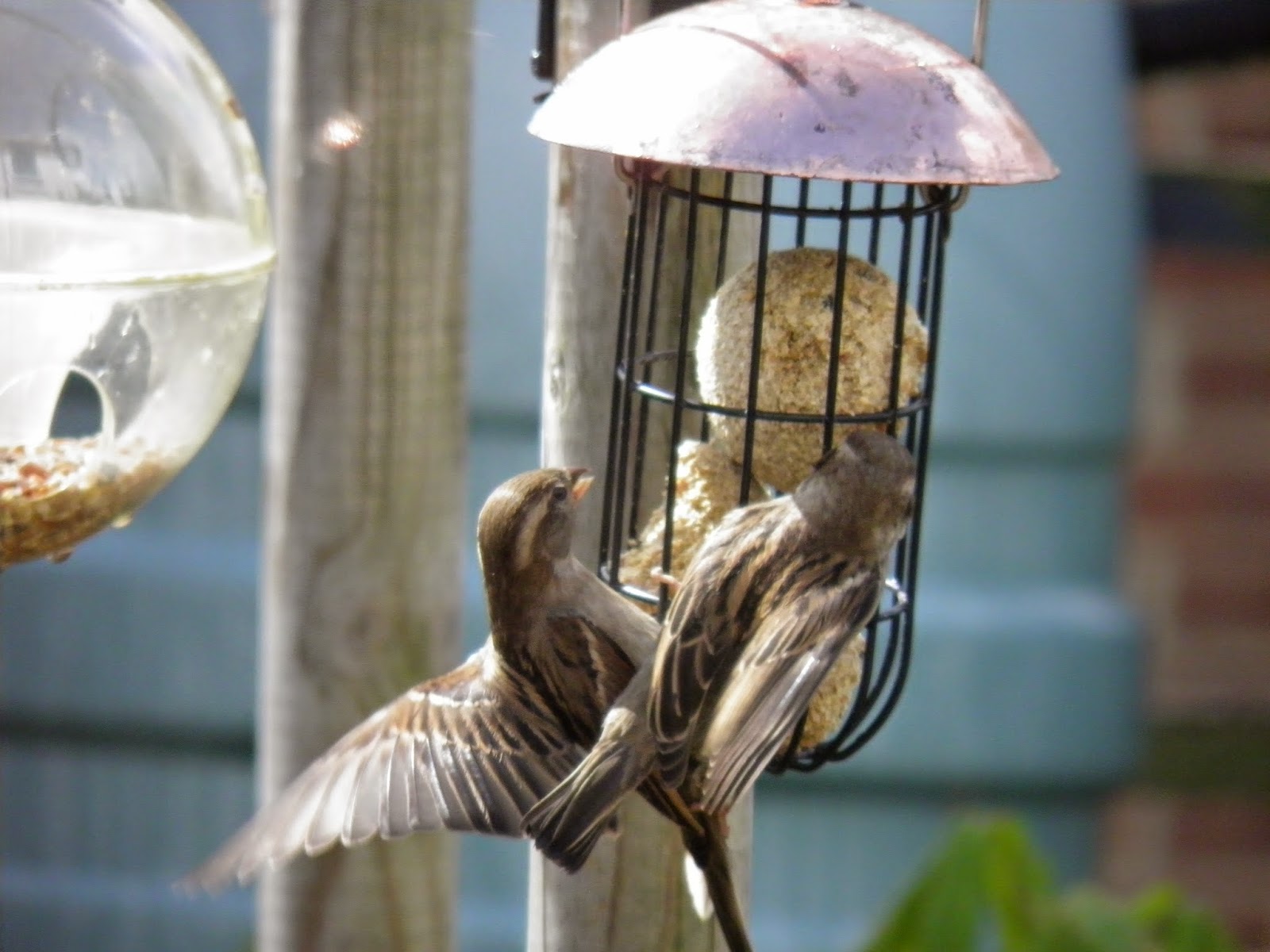 I love my chirpy cockney sparrers, although I'm seeing fewer and fewer of them as the years pass.

I used to get the "big flock" of about 18, and the "little flock" of seven or eight, in past years, and I would look out for them - but now I only get a few at a time.

Here are a couple of them, pretending to be blue tits on the fatball feeder.

Thrushes rarely come to my garden, which is such a shame as I would love a "tame" thrush to take care of the snails. I have a couple of frogs, who do a great job of eating all the slugs, but they don't make much impression on the snails. 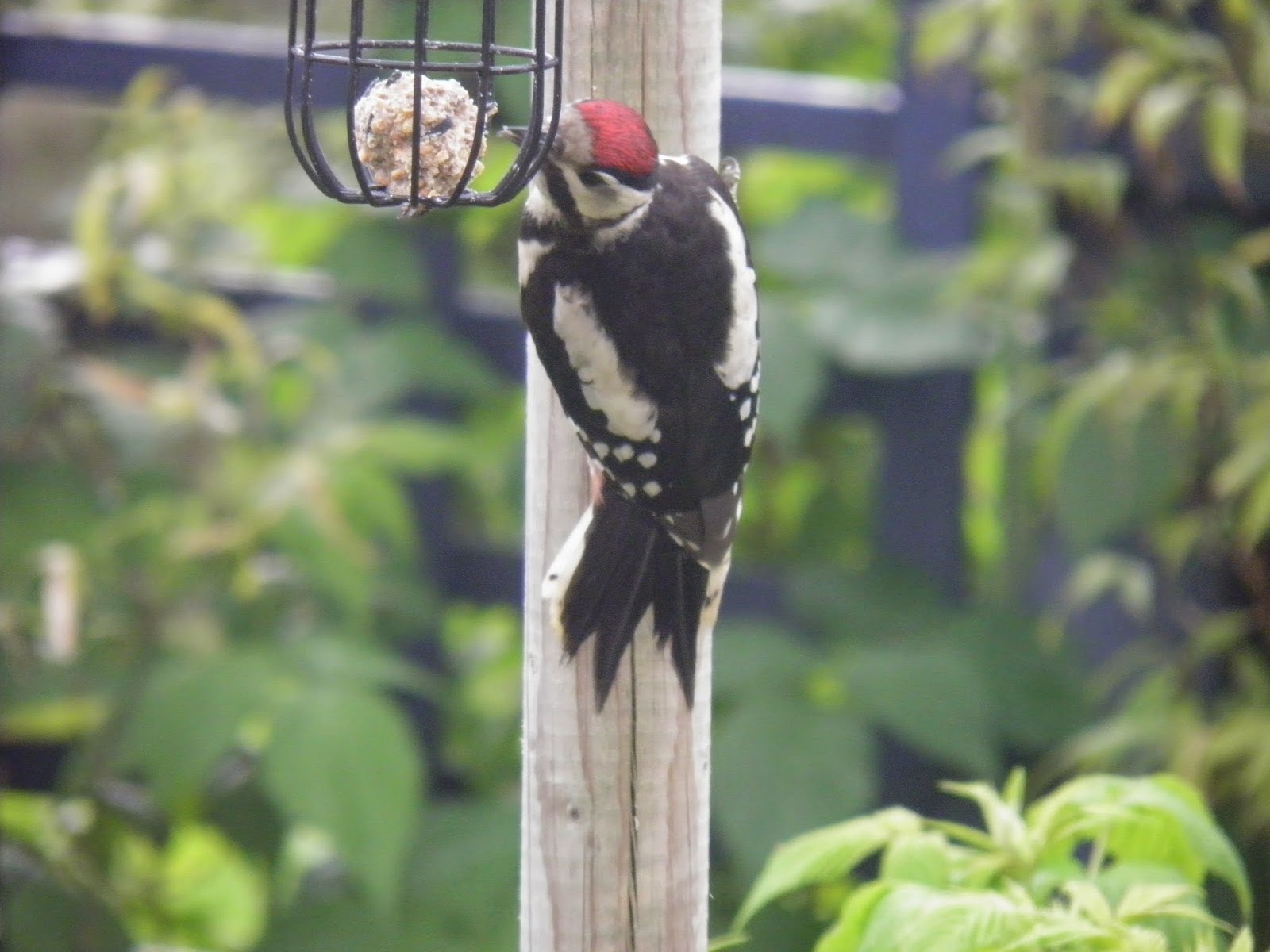 Sometimes I even get the odd woodpecker,  here's one using his tree-climbing skills to hold the post, while he "makes a long neck" to get at the fat ball.


Occasionally I get wrens, I get lots of blue tits, the occasional great tit, and - my ultimate favourite - long tailed tits, which are about as cute as they get, and which seem to be rather short-sighted:  if the flock appears (you can hear a sweet, high-pitched peeping getting closer and closer, that usually means they are approaching) and I am in the garden, and stand still, they will fly all around me to get to the feeder. 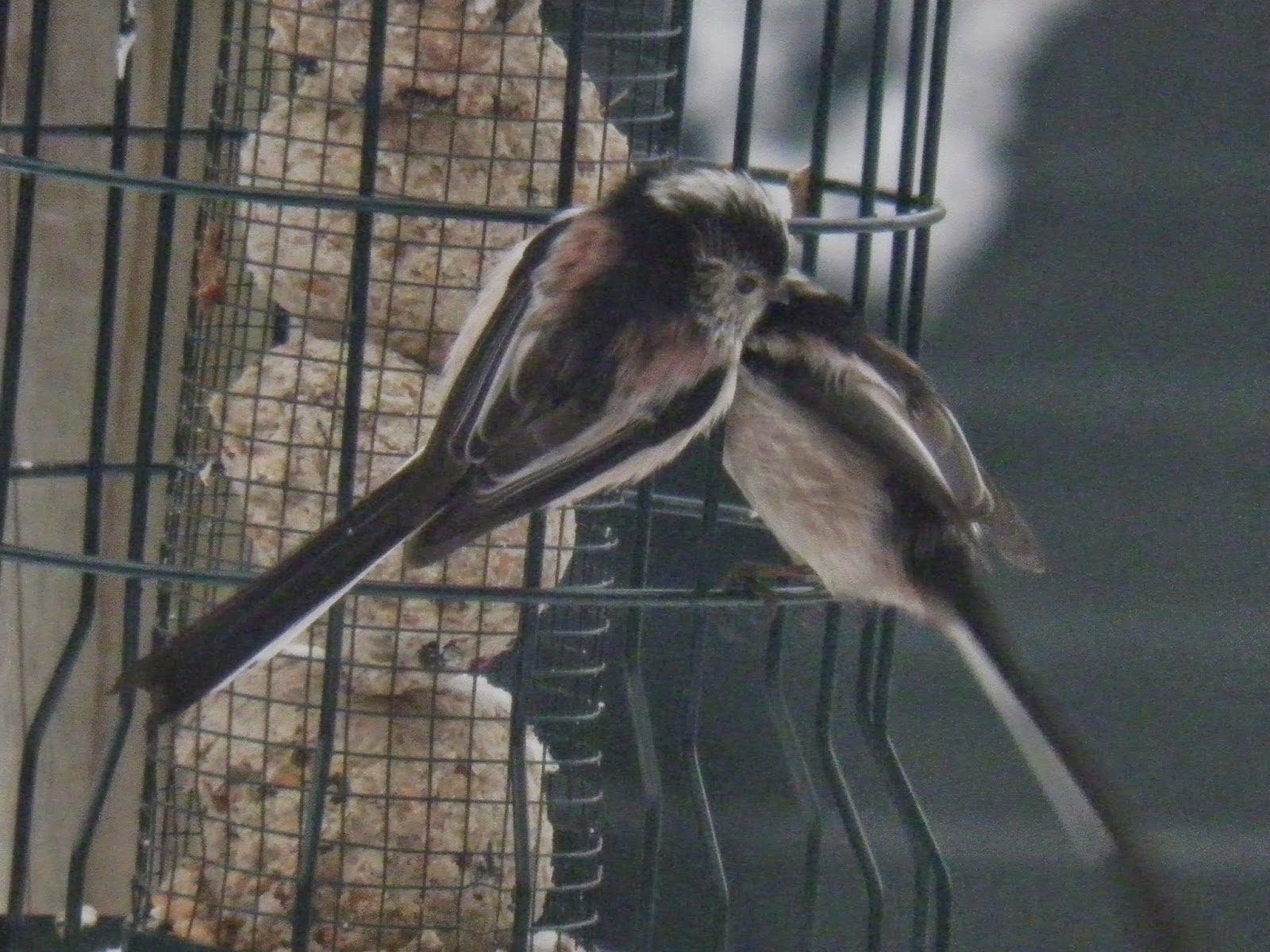 Here's a couple of them, discussing how to get at the fat balls inside the squirrel-proof feeder.

"Go on, squeeze through there."

I bought this feeder in an effort to prevent the starlings scoffing everything in sight, and it worked - but the small birds were not particularly keen on it, either. I can't blame them, it does rather look like a cage, doesn't it?

My main problem, however, was with pigeons, those great, fat, bloated, rats of the skies. Have you seen their feet? *shudders* horrible things!  Collared doves are ok, at least they have a certain amount of grace, and you usually only get two of them at a time, but the pigeons were becoming a bit of a nuisance.

I tried various feeders - cages for fat balls, seed feeders, plastic globes, you name it - and they all had the same problem, which was that there would be a rain of "bits" all around and underneath them, which attracted the pigeons.

So I decided to go for a bird-house, a little hut on a central pole, as it would keep the feed off the ground, and would keep the rain of the feed. Which it did. But the pigeons would blunder their way inside it, then scoff the lot.

The first step was to create some bars to keep the darned things out - using scraps of wood, and some of my home-grown canes, I created a "cage". 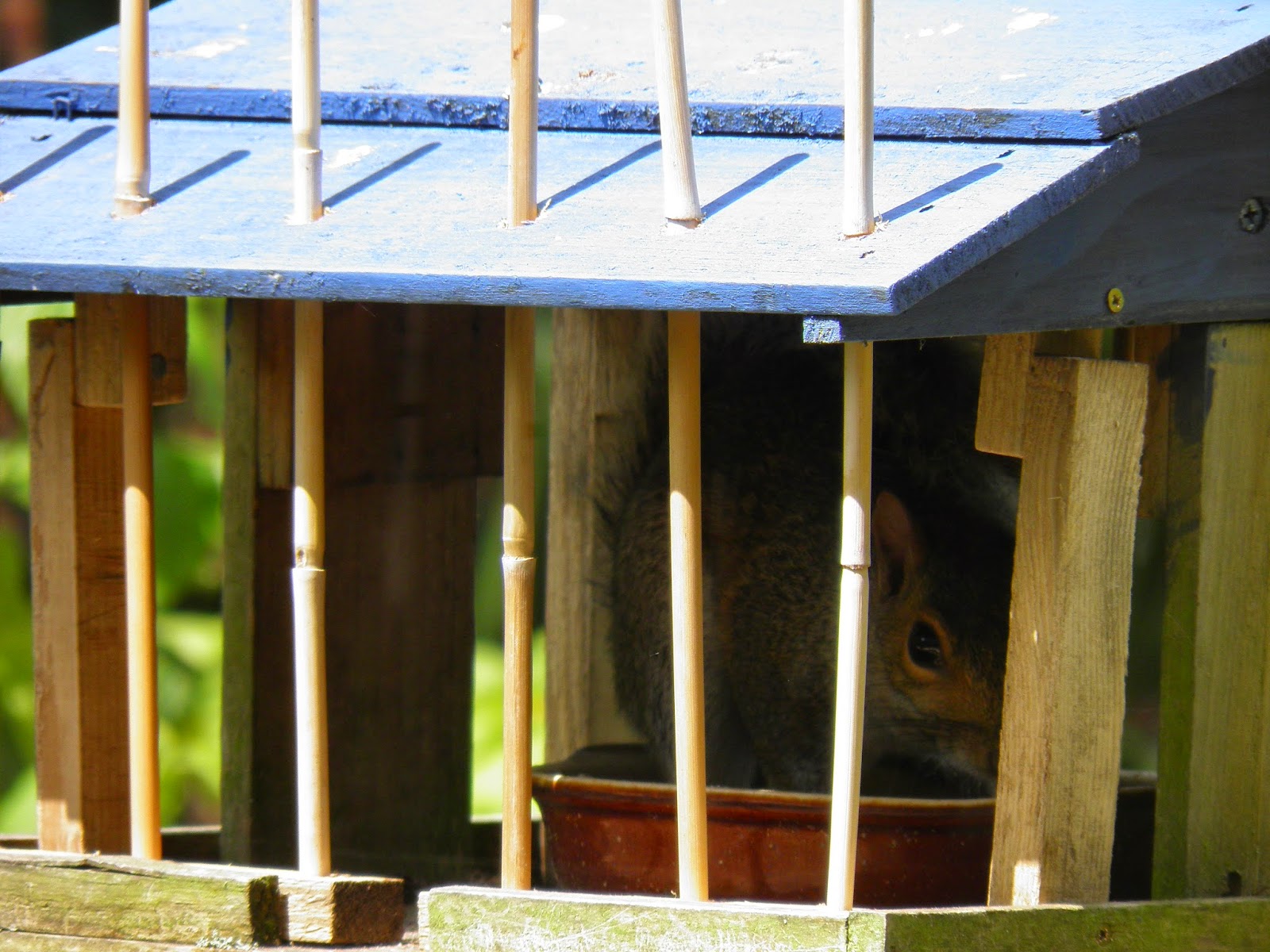 Here is the Mark I version: it was initially 100% successful at keeping the pigeons out, and the starlings as well,  but it appeared to be irresistible to a squirrel.

Yes, there he is, enjoying the bird food.

Ah well, I don't really mind squirrels, and at least he had the decency to just squeeze between the bars.

The starlings, however, took it as a challenge and learned to land on the roof, take hold of the projecting pegs, and pull the canes out. This allowed them inside, and the pigeons as well. Hmmmm.

Mark II: the canes were wedged tightly in place, apart from two at the front, to allow me to refill it.

Much better. No more starling ingress. However, the pigeons took to landing on the roof and waddling around. 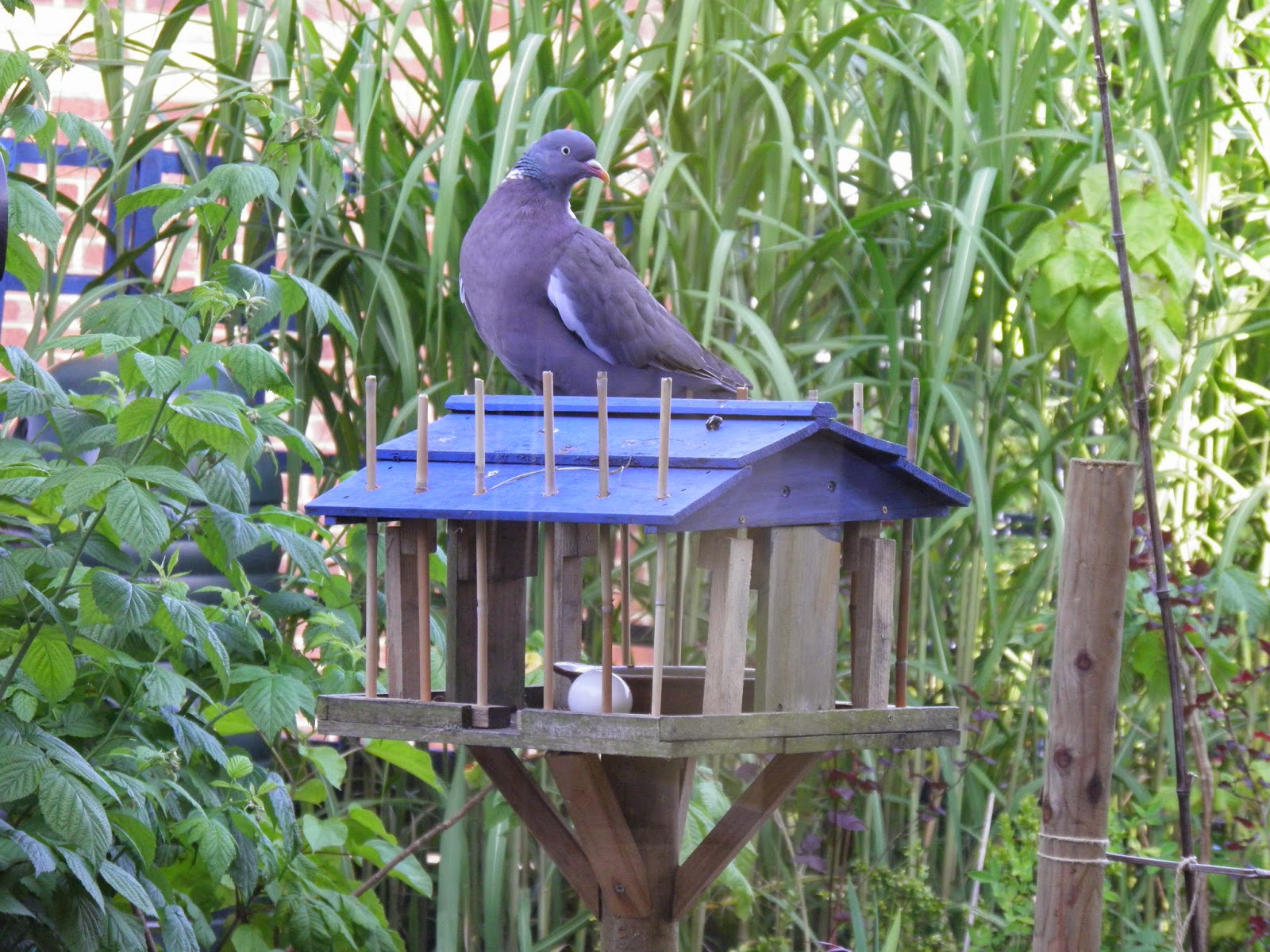 This shouldn't really be a problem, but the are so fat that they shake the entire pole, and given the choice, I would not have them in the garden at all.

So how could I stop them landing on the roof?

Answer: more of the canes, cut short and stuck into another piece of scrap wood, at odd angles. I took the idea from commercial anti-bird-perching strips that you see on top of rafters in covered walkways. 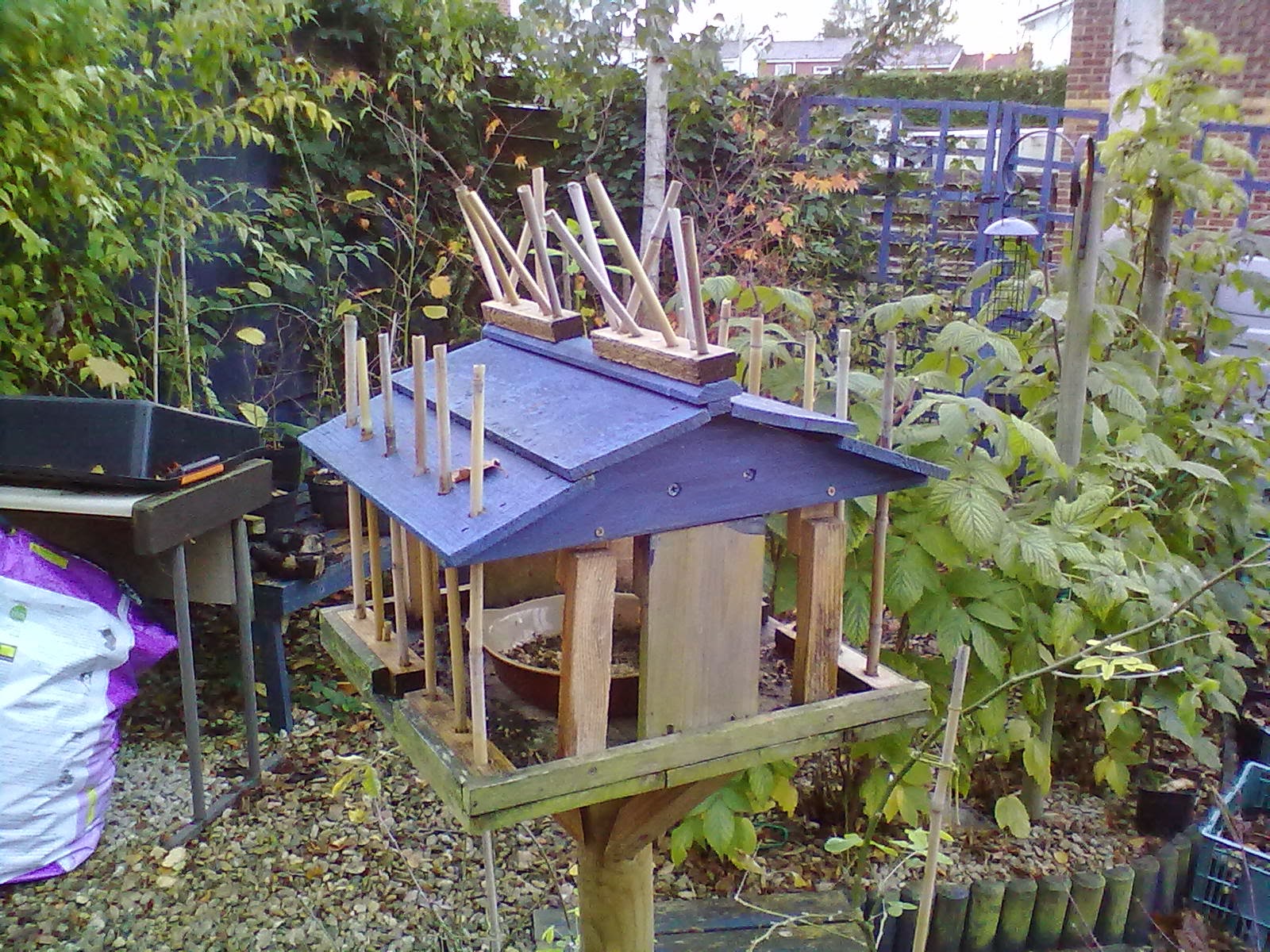 It looks ridiculous, but now the pigeons are foiled from landing on it, as are the magpies.

(Memo to self: must tidy up the garden before taking pictures in it.)

So now I have dry bird food, no mess on the ground underneath, no pigeons, no starlings, and hopefully this winter I will have a good range of little birdies coming along to enjoy it!

Posted by Rachel the Gardener at 10:06