How to waterproof boots - part 8

Maybe not actually part eight, but I do seem to be going on about this a lot, possibly because it is a major annoyance: wet feet are cold and uncomfortable, they make me stop work sooner than I might otherwise do, so I'm losing money: not to mention the possible health risks of having wet feet.

So I am constantly searching for ways to improve them. As an aside, I don't quite understand why manufacturers bother to make shoes and boots that are NOT waterproof - this is the UK, after all, and it does rain here, much of the time: and even if not actually raining, those of us who have to walk on grass as part of their job find that grass stays wet for a long time after overnight rain, or heavy dew.

Over the last few years I have tried a number of products, starting with dubbin, which was utterly useless, expensive, and my blog articles attracted the attention of someone who was clearly an employee of a dubbin supplier, who kept leaving comments praising the stuff, despite the fact that it clearly does not work. It may well be a wonderful conditioner of leather, but it is not a waterproofer. I tried Nikwax, both for leather and for nubuck, as I have boots of both: no use at all. I tried wax shoe polish - nope. Possibly if you start with shiny leather, and polish them every day, but not on my rough old work boots.

I consulted an ex-army friend, who admitted that despite daily polishing and treating, their leather boots leaked by mid-day. Good to know that the British Army is marching on wet feet.

By this time, I was desperate enough to try a can of Scotchguard - expensive, at £8 or so for an aerosol, works brilliantly on fabric, but does nothing for my leather boots. I even tried rubbing in Vaseline, which was easily on a par with dubbin, and massively cheaper: it made the water "bead" for about the first 20 mins, then the boots started to darken, and shortly afterwards I was wet-socked again.

This month's desperate last-ditch effort was to rub an old candle stub over them. Once again, it seemed to improve things for a while, but by halfway through the morning, wet socks once more.

This week I discovered that, unusually, I have worn out a pair of boot laces before wearing out the boots, so I had to buy a new pair of laces.

While in the shoe repair shop buying them, I asked the guy behind the counter what he would recommend for waterproofing leather boots, showing him my booted feet so he would know what we were dealing with.  He gave me a long lecture about how inadequate the usual products are, and for some reason tried to convince me to buy leather walking boots for £150 which could then be re-soled for another £65. Leather walking boots?Firstly, what century does he belong to? Gore-Tex, mate, Gore-Tex! Secondly, I am not talking about walking boots, I am talking about working boots, as per those on the ends of my legs....

After forcing me to listen to long tales of these leather walking boots, he finally told me that Neatsfoot Oil was the stuff to use, on brand new boots, before you start using them. So I bought a bottle of the stuff. He warned me that new boots will soak up a lot of it, but that I should keep oiling them until they stop taking it.

Rather like oiling my snathe, then: once a day for a week, once a week for a month, etc? 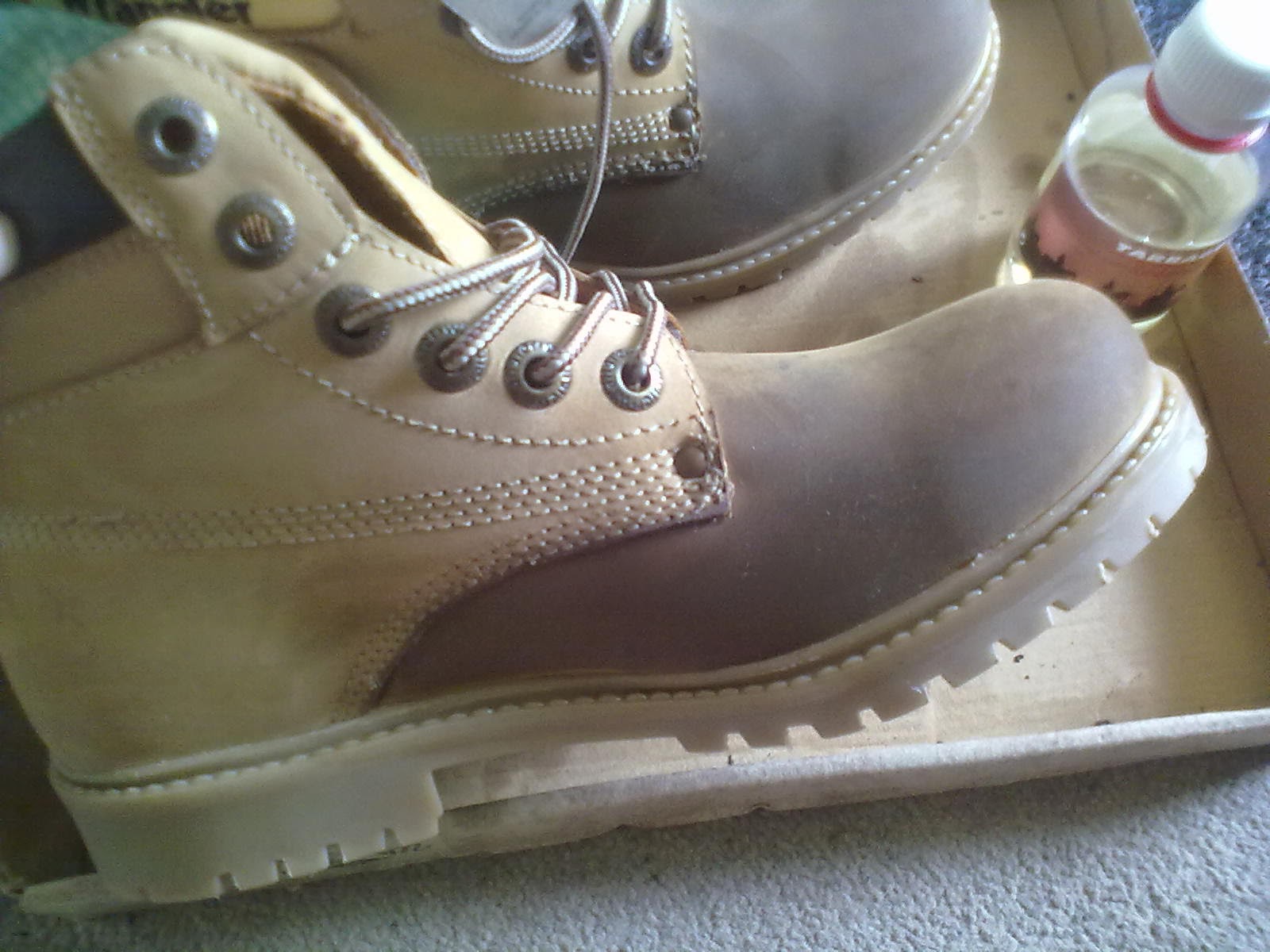 Here we are after the first session, I've wiped what seems like a lot of the stuff onto the lower section of my new unworn boots, and they do indeed soak it up.

On application it went very dark, as you can see from the toe in this picture, but a few minutes later it had dried back to light brown, as you can see on the heel section. Which was as dark as the toe, ten minutes earlier.

I have re-oiled them every couple of days, and the lower part is now somewhat darker than the bit around my ankle (the grass isn't that long) but I don't give a  hoot what colour they are, as long as they are waterproof.

I shall continue to oil them for several more days, and then I might just give them a trial run.

I'll let you know how it goes.
Posted by Rachel the Gardener at 17:07