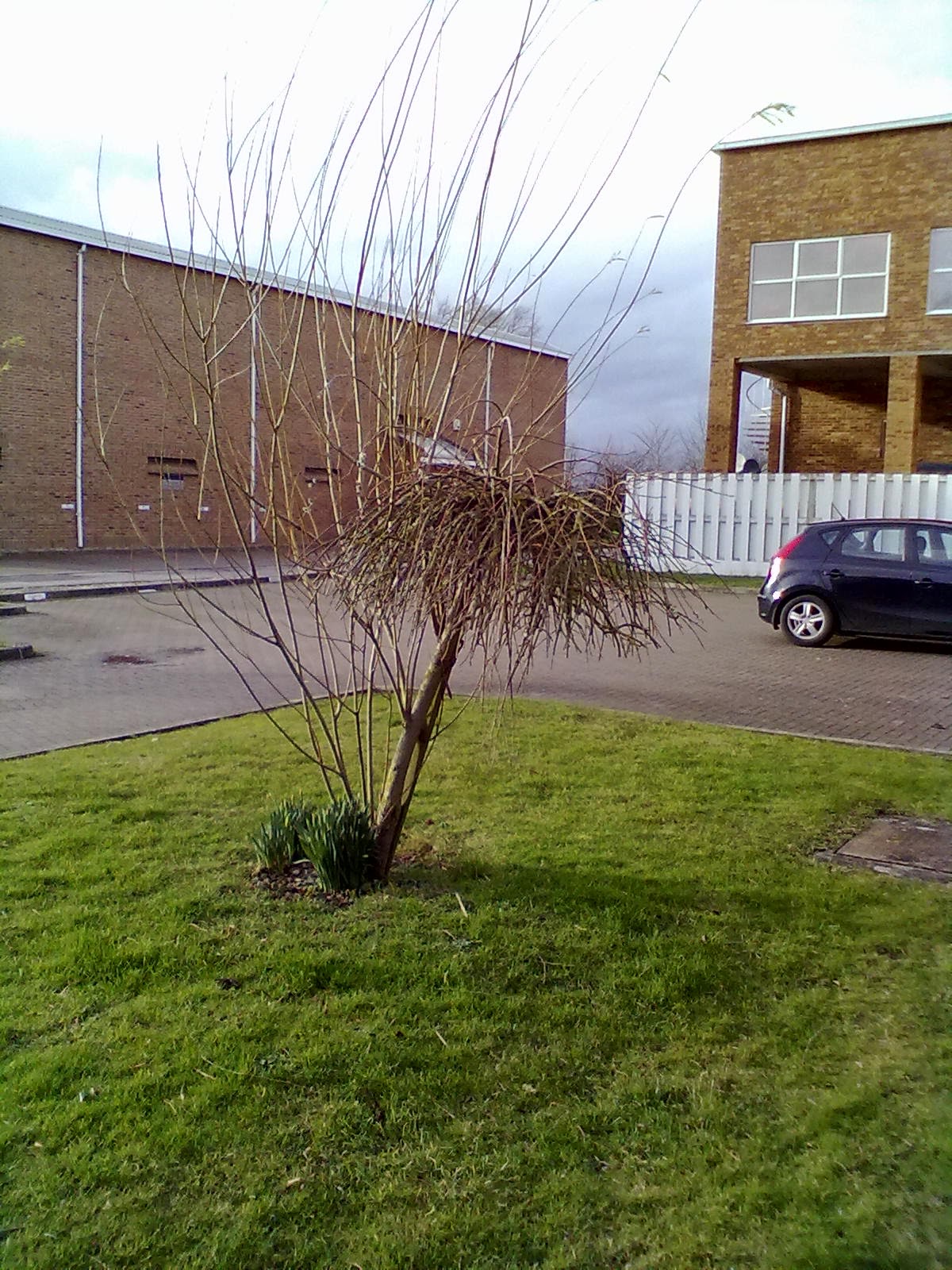 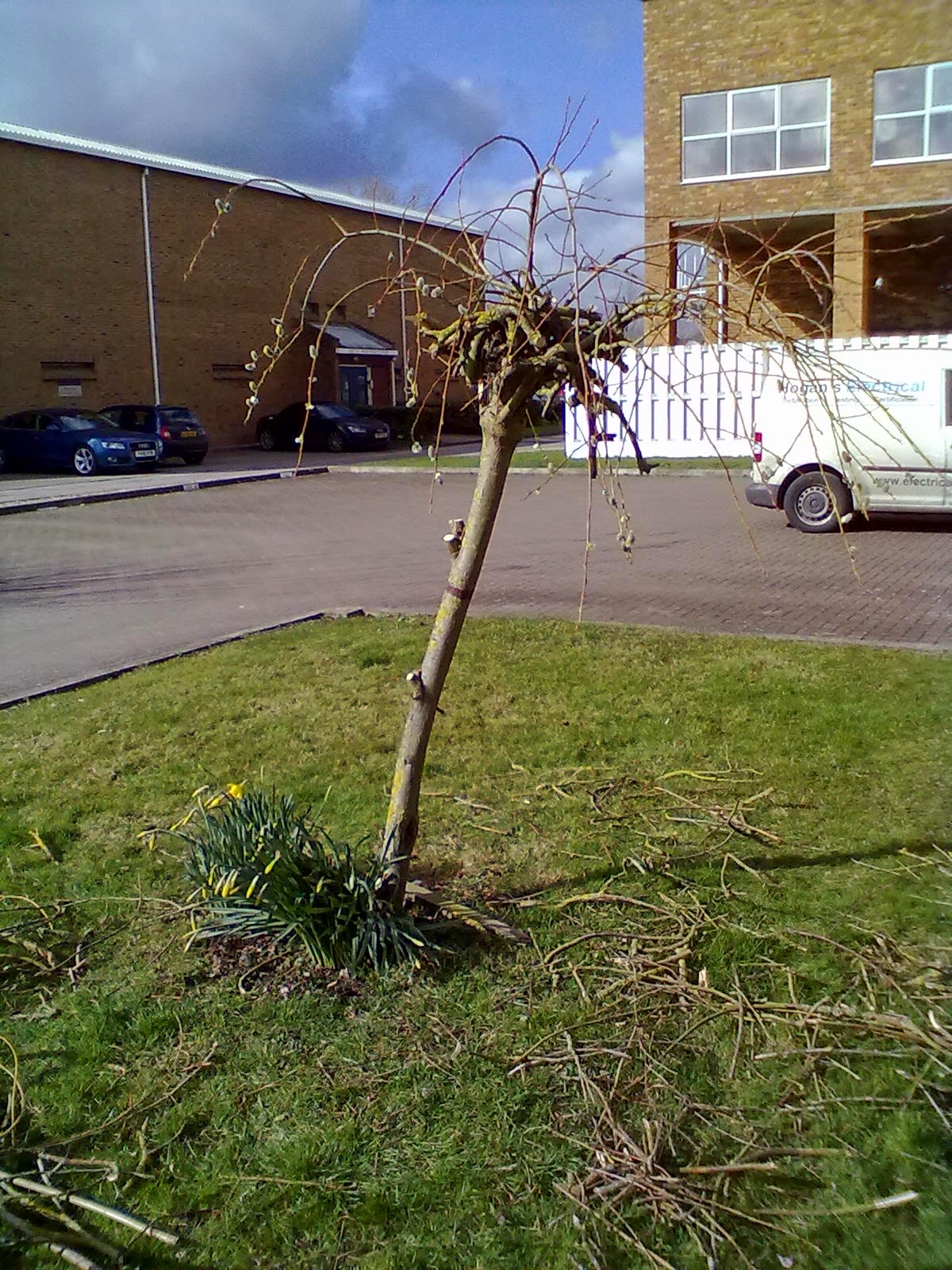 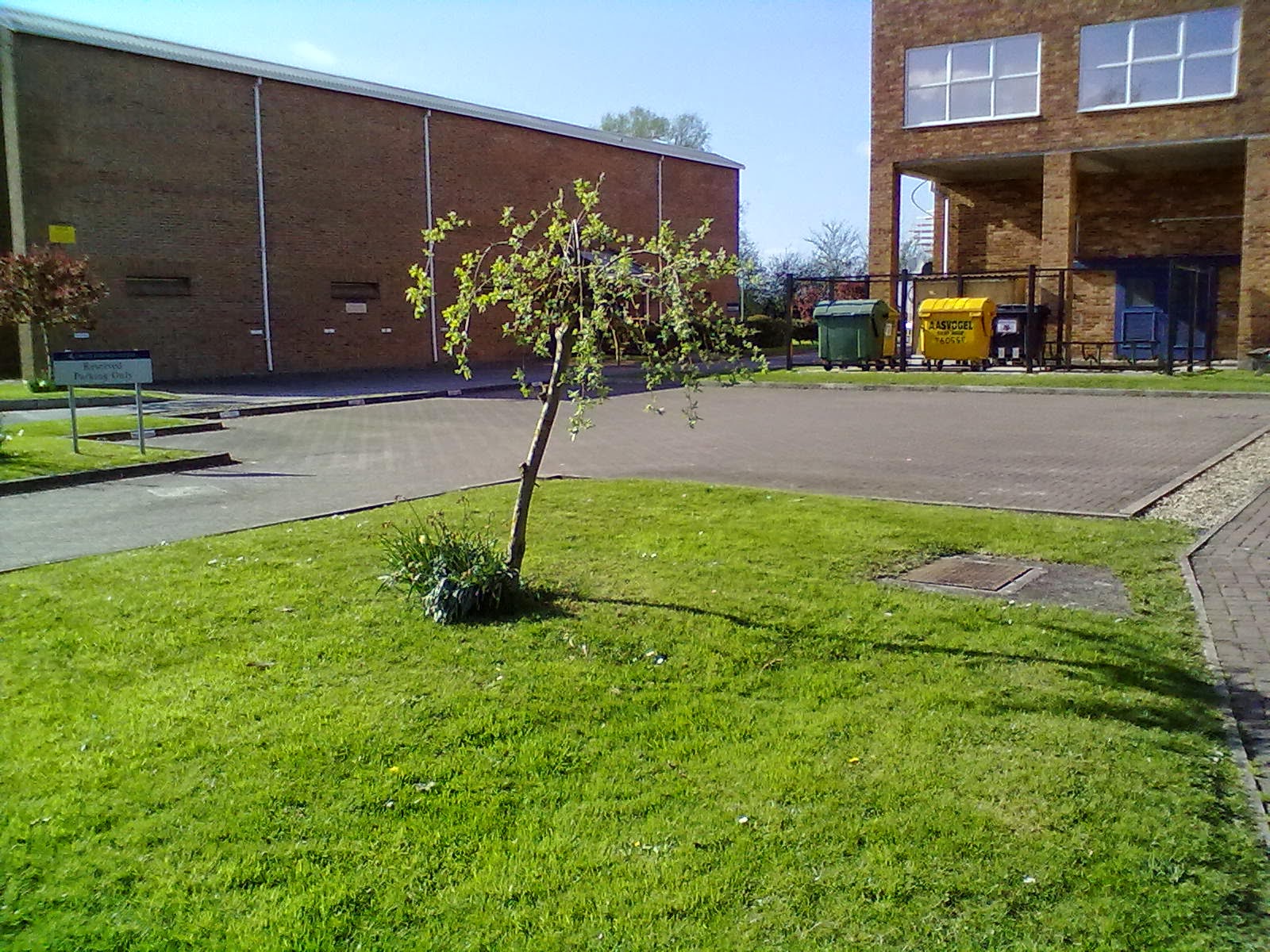 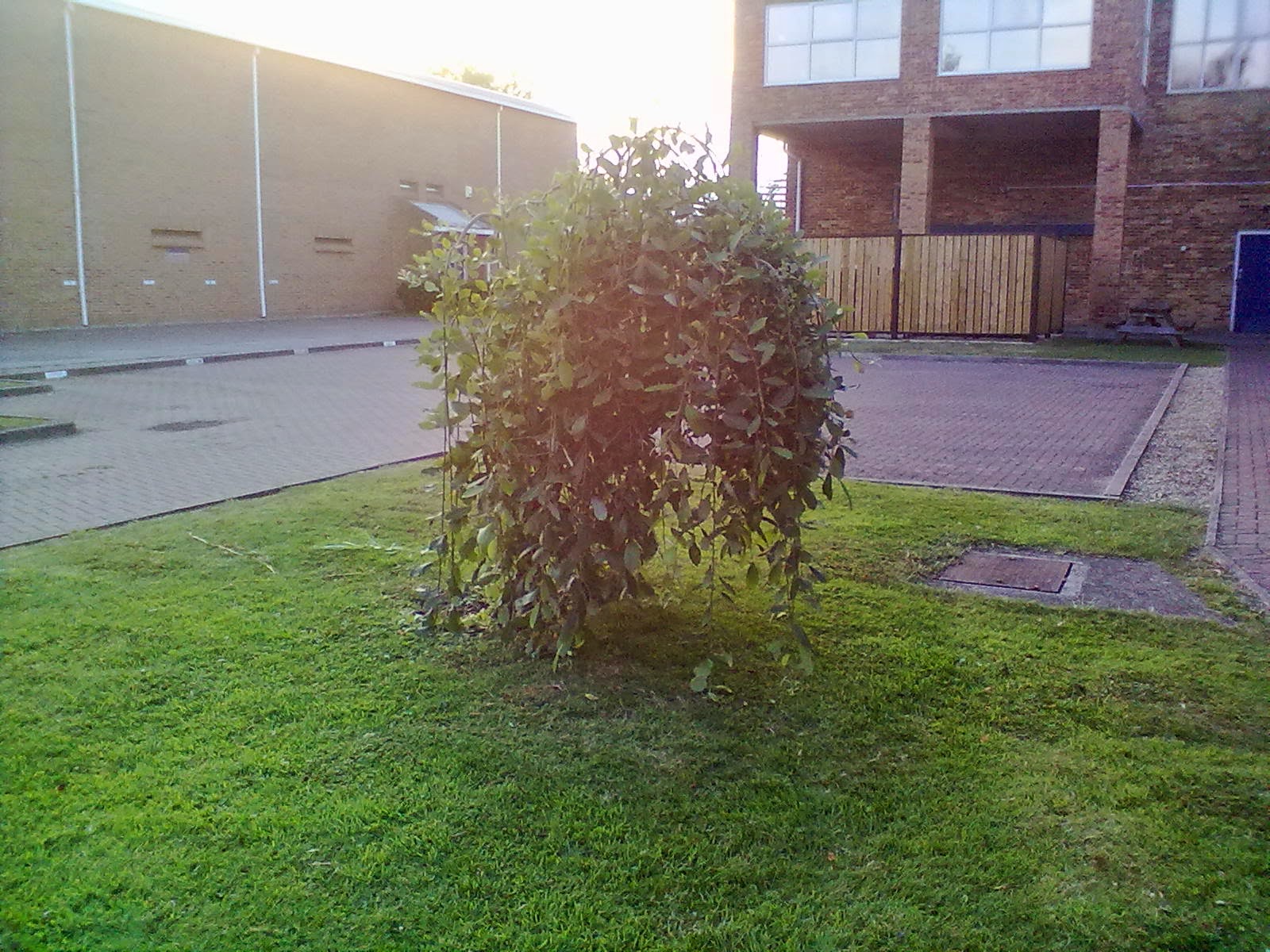 I will be keeping an eye on it from now on, now that I have permission to do so, and hopefully it will never again get into such a mess!
Posted by Rachel the Gardener at 09:18 15 comments:

The Weirdness of plants

Verbascum thrapsus is the proper name, it's a common enough cottage garden plant, and often pops up unexpectedly as the seeds are tiny, and very light, and can spread considerable distances, and can survive in the soil for many years.

I must admit that I'm a bit soft-hearted when it comes to weeding them out, and if they are in a place where they won't crowd out other, more valuable plants, I will let them grow on.

Earlier this year I left one, it grew a huge towering flower spike, then we some very hot days and, lacking slightly in water, it began to droop. Then it rained. 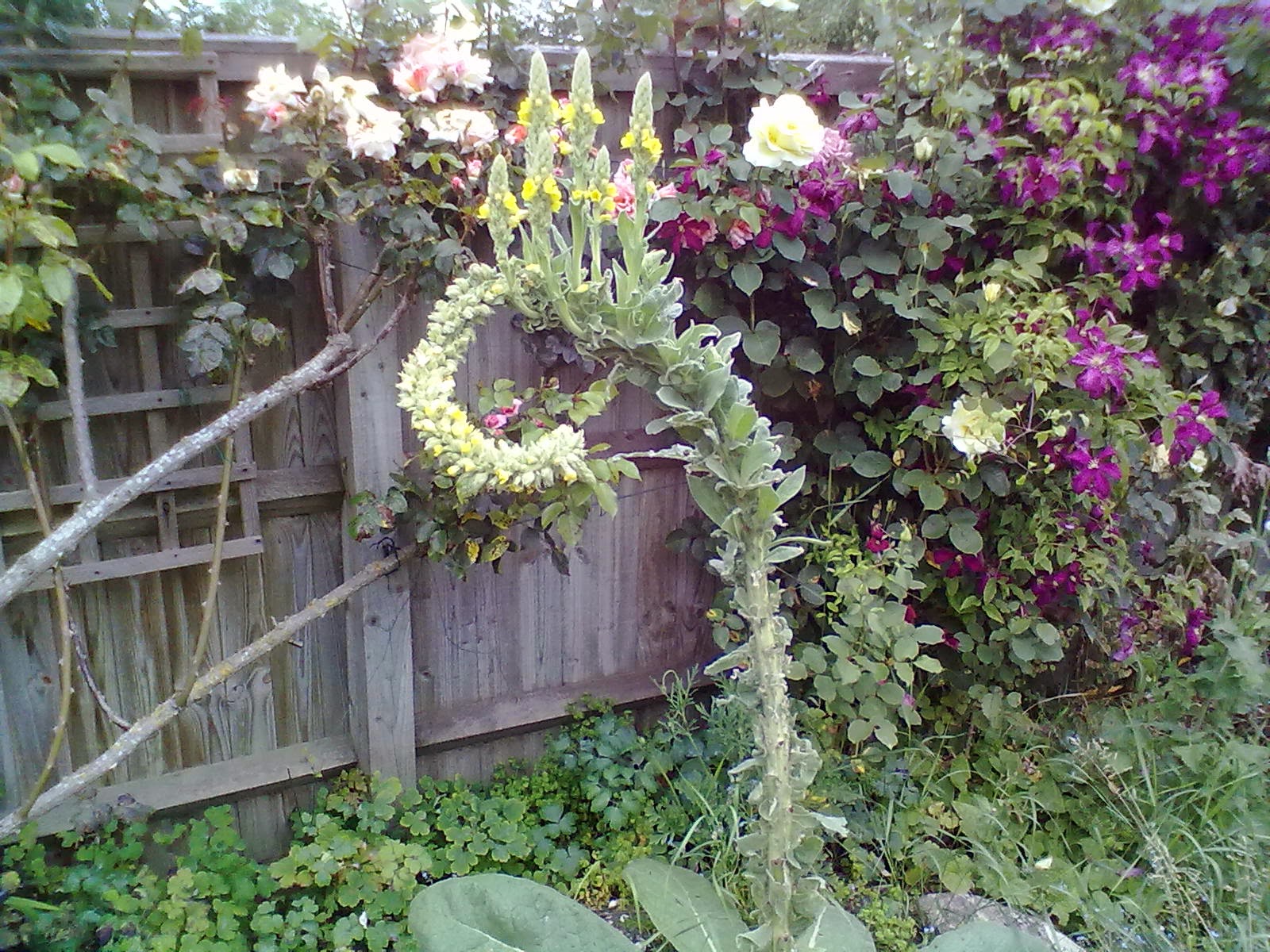 Isn't that amazing, it sent up six miniature flowering spikes on the top of the wilting original!

As an aside, in the background you can see a rose-covered fence with clematis growing through it: something of which I disapprove strongly, as it makes it impossible to prune either of them properly.

However, for just a week or so, it makes a glorious show, doesn't it?

Returning to the Mullein, I found another one doing strange things in another garden: 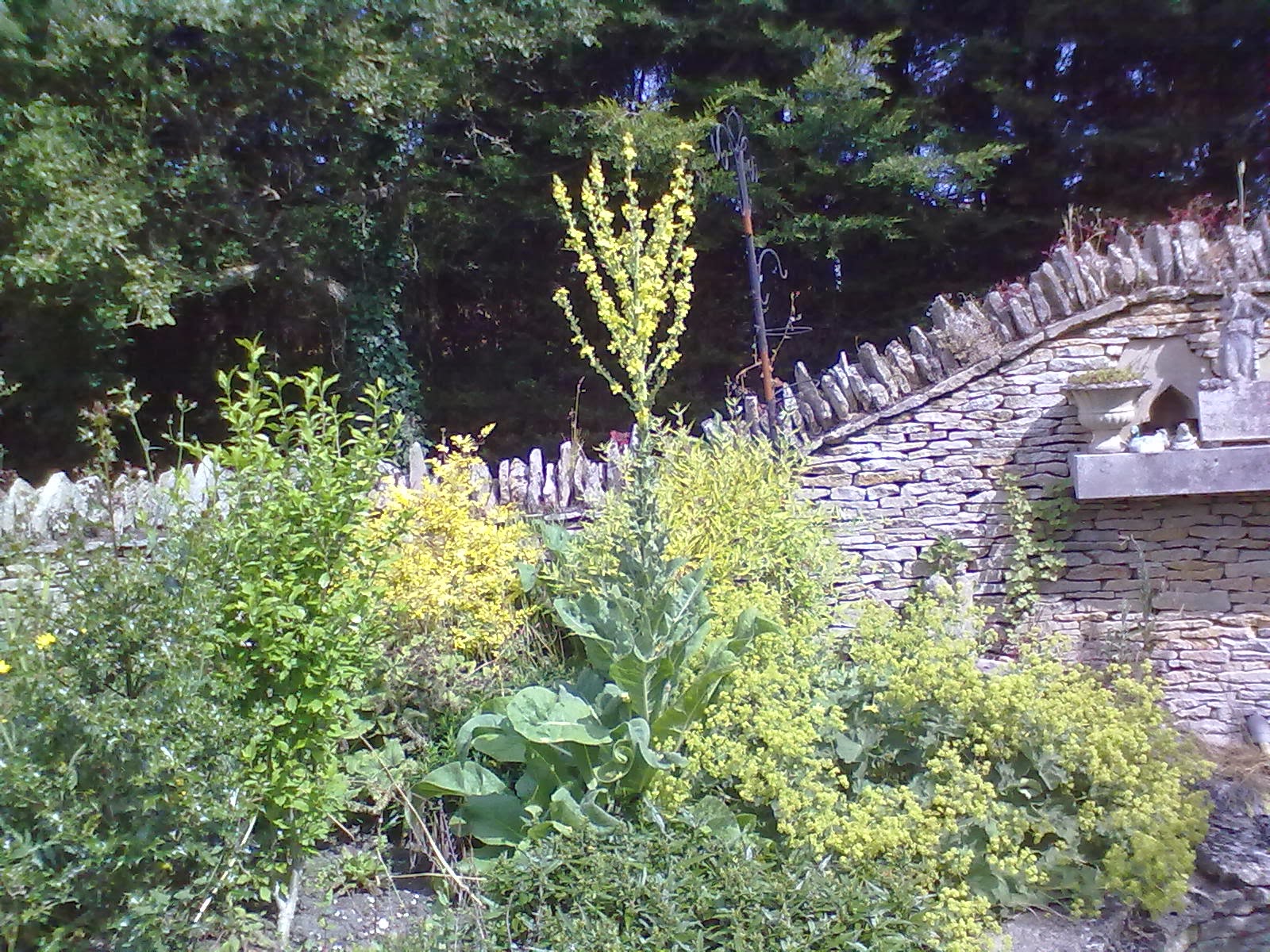 This time the Mullein - in the very centre - had sent up a candelabra effect, instead of one single flowering stem.

Both of these are fairly normal variations on a theme, nothing sinister about them, but I think they are quite interesting.

As the rosette of leaves at ground level is so dense, I will usually remove the leaves as they start to get a bit tatty, or if it is threatening to smother something more desirable, I simply cut all the leaves right back.

It doesn't seem to slow the plant down at all!

If you don't want it to seed everywhere, make sure to chop off the flowering spike as soon as it finishes flowering.  And if you do want it, remember that it's a biennial, which means that the first year will just be a small rosette of leaves, and it won't flower until the following year.
Posted by Rachel the Gardener at 07:35 No comments:

Ever wondered how much garden designers cost?

Have you ever thought about having your garden redesigned by a professional, but have been put off by the cost?

I don't blame you, it can run to many thousands of pounds, and not all of us have that much money to spend on our gardens: furthermore, how do you start? A lot of people are worried that if they approach a proper garden designer, they will find themselves committed to something that might be very expensive. And how do you find a good one? What if you get someone who wants to install concrete monstrosities and paint everything purple?

And why hire a designer, anyway? Can't your own Gardener do it? Can't you do it yourself?

Well, I have a qualification in garden design, but I don't think of myself as a Garden Designer - I'm perfectly happy to do planting plans, to offer suggestions and enhancements, and to discuss aspects of your garden, but I'm not in the league of "proper" garden designers. They have a certain "flair", an eye for the overall picture and - most importantly - they have no history with your garden, they don't accept the limitations and restrictions that you have lived with, and which might be holding you back from making the big changes that your garden might need.

And often it's the "fresh eye" that makes all the difference.

Last year I discovered that Mary Ann le May, who is an extremely good professional Garden Designer, and who I have known for several years, is now offering a consultancy service, as well as doing "proper" full-scale garden designs.
This is the chance to have your own private consultation, where she will come to your garden for a 1-hour consultation (or it might be 2 hours, actually, you'll have to contact her for the exact details) to discuss the problems, and she will suggest options and improvements, and if required will additionally provide a written report with planting suggestions.

This is a fantastic opportunity to get some real Designer know-how, for a very reasonable cost - a 2-hour consultation and a written report is under £200 (or it was last year, you'll have to ask for the current price!) which is such good value. Especially as you get the written report as well, which means you have time to re-read it, look up all the plants, think about it, and so on, in your own time.


And I know that it works - I was called in by a lady in Hagbourne, who had taken advantage of Mary Ann's service to get a fresh eye on her rather tired front garden - she handed me the Design Report and instructed me to carry out the work! It was a lovely experience for me, as Mary Ann is always spot-on with her choice of plants, especially for difficult places, and her suggestions for removal or reduction of plants is also very good: she has what I would call "a good eye" for these things.

So if you are interested, go to her website and have a look. And if you have any worries or concerns about what it involves, feel free to ask me. Or ask Mary Ann, of course!