Phormium: How To Split Them

We've all had days like this: the Phormium, which is a lovely plant for all-year-round architectural shape and colour, gets so big that it starts crushing other plants, and at the same time starts to look somehow rather tatty.

The answer, as with many garden plants, is to split it.

The great thing about Phormiums, as opposed to monsters like Yucca and Cordyline is that they are not one gigantic stalk or trunk: they spread by forming new plants around the old one. So it's actually quite easy to lift, split, trim and replant. 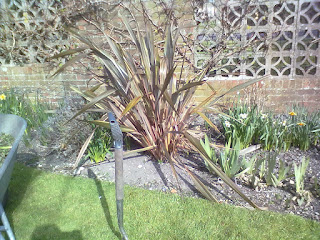 Here's a typical example - it's been lovely for several years, but now it looks tatty, and it is encroaching on the plants around it.

So, first  job, get a fork and loosen the soil all around it. If the Phormium is in a very floppy state, you can either cut off the outside leaves, or tie the whole thing up into a bundle to make it easier to deal with.

Having loosened the soil, dig in with the fork, get underneath it, and lever it out of the ground.

At this point, you will probably see that it will start to fall apart into clumps: 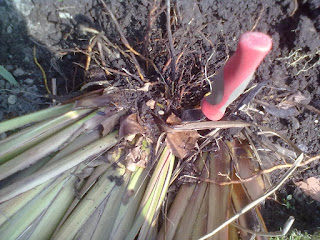 If not, use a hand tool (here is my faithful Daisy Grubber, £2.50 from a cheapy shop and still going strong after two years of daily use, who says you need to buy expensive tools?) to winkle your way in amongst the roots, and prise them apart.

Shake off as much soil as you can - it's much easier to replant them if you can spread out the roots, and to do that, you need to be able to see them. 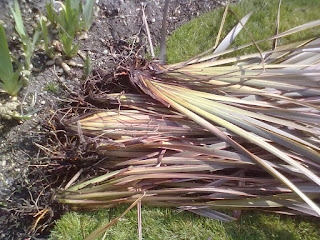 Here is about a third of the clump in the first photo - as you can see, it split up easily into a large number of plants.

For ease of replanting, I take each clump at a time, and trim off the outside leaves as low as I can get them.

These new plants are rather two-dimensional, like a fan of Iris leaves, which makes it easy to see what you are doing.

After trimming off the outside leaves, I then cut down the remainder of the leaves to about ankle high - if you don't do this, the plants will fall over when you try to replant them. 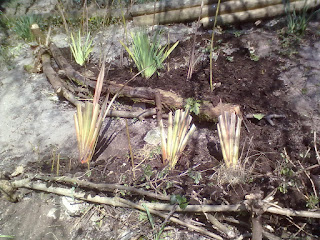 Here are a handful of the new plants, trimmed and replanted elsewhere.

As you can see, they now become a number of neat clumps, which can establish themselves quickly. 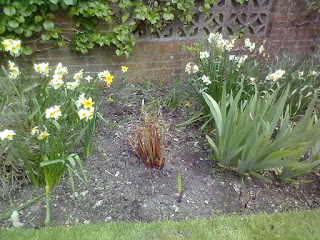 Getting back to the original, having dug it all out I was able to dig over that area of the bed, clear out some unwanted weeds and fluff up the soil. I added some home-made compost while I was at it, more from habit than because I thought the soil needed a boost...

And then I replanted one of the best sections of the original plant, spreading the roots out sideways as much as possible, and firming it down well.

Add a good watering, and off it goes!
Posted by Rachel the Gardener at 15:23 2 comments: