Wildflowers In A Box

I came across this product in a garden centre a little while ago - wildflowers in a "shake-on" pack.

It caught my eye as it was made by the same company who supply Patch Magic, which one of my Clients bought last year, and which impressed me very favourably when I applied it to a bare patch in the formal lawn.

The Patch Magic pack says that it's grass seed, feed, and (I think) coir: you shake it over the prepared bare ground, press it down, water it, and that's it: the coir protects the seed and retains moisture, and has the added - rather clever - benefit that as it starts to dry out, it changes colour to a pale brown, so you can easily see when it needs watering again.

Well, it worked fantastically: the new grass popped up in no time, and now is thick and lush, just as we wanted it.

So when I saw their wildflower version, I thought "Wow, that's a good idea!"

However, a week later (strange coincidence I know, but life is full of them) I was asked to do a one-off weeding and tidying session for a lady who had hurt her back, and was worried about the garden getting out of control. She asked me particularly to weed her "Wildflower Patch", which she had sown using the exact same Wildflowers-in-a-Box pack that I saw for sale.

It was so bad/good that I had to take a photo of it: 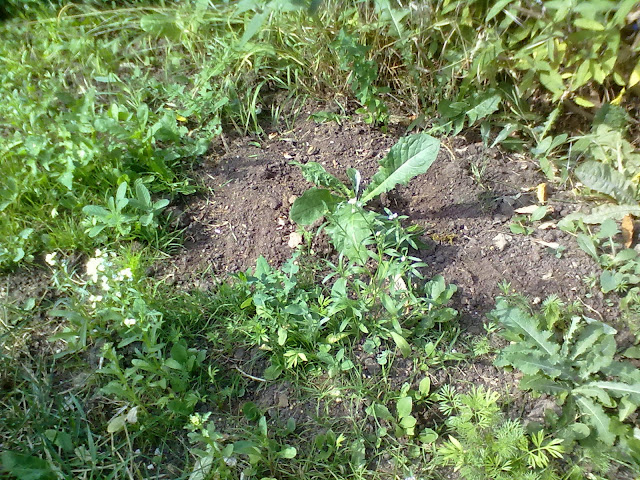 The bare brown crescent is where I have removed grass - I got this far, than then thought "this is so bad that I must take a photo."

If you look closely, you can see a lot of grass: at the bottom is some Nigella (Love in a Mist) which is not in the Wildflower Box, but is from the existing garden: there is a good quantity of forget-me-not, and some cleavers (goose grass), also from the main garden.

But wildflowers? Not a single one. Not even Poppies, which are legendary for their easy germination.

By the time I'd removed all the grass, and the many recognisable and unwanted weeds such as thistle, dock, nettle, bindweed, buddleia, chickweed etc, there was very little left. The poor Client was most crestfallen that her "instant" wildflower bed had, to all intents and purposes, failed completely.

I think her mistake was in not ensuring a stale seed bed before sowing: grass will smother most wildflower seedlings, as will large established weeds.

This means that if you want delicate wildflowers, you have to make it easy for them by clearing away everything from the chosen area, waiting for the weeds to spring up, clearing those weeds, waiting again for the next crop, clearing those ones and only THEN planting your wildflower seeds.

This is not as easy as it sounds, as it means having to look at bare brown soil for several weeks, early in the year; and not many of  us are prepared to sacrifice parts of our gardens in this way.

Instead, I took her a selection of small plants from my own garden, including Fox and Cubs (Pilosella),  Fritillery, Common Spotted Orchid, Helleborine, Foxglove and Purslane, along with a handful of fresh poppy seeds of various kinds, which formed the basis of a varied and colourful bed, which should return year on year as the plants are all perennials, with the annual poppies filling in the gaps until the others have spread.

So, based on this rather small sample size, I would not recommend buying wildflowers in a "shake-on" box!

Posted by Rachel the Gardener at 10:10 No comments: