Today was a fun day - if rather cold... I'd been asked to tidy up a natural pond - that's a pond which does not have a plastic liner, or is cast in concrete, it's a pond where the bottom is just ordinary soil, through which the water rises, to fill the pond.

This particular one is, we think, situated over, and fed by, an underground stream, because it never dries up completely, even in the hottest of summers: and at this time of year (very early spring), the ground all around it is sodden, and it's full right up to the top.

Working in a pond, like chopping down trees, is a job where it's far, far safer to have two of you, so I roped in a colleague, and the two of us arrived on a cold, windy morning, with the thermometer saying 4 degrees, but the BBC website saying "Feels like: 1 degree." Brr!

Undaunted, we put on our waders, pulled on our super-long gloves - as described in my previous article about Pond Maintenance - and started by clearing dead foliage and debris from the plants around the edges. The pond was thickly covered in floating duckweed, but luckily we weren't expected to get rid of that - just the dead foliage above water level, and the debris from overhanging willow trees, under the water.

It's always best, I find,  to do this job first, because we were shortly going to be flinging the dredgings out and over those edge plants, so we might as well get the tangled parts out of the way first.

"What's up?" from my colleague.

"Frog!" I yipped. No, I'm not scared of frogs, I just never see them until they move, and then they make me scream like a girly. I know how those dinosaurs in Jurassic Park felt.

"Stop being such a wuss."

Next, we bravely slid ourselves into the water. Yikes! But after the first couple of seconds, honestly, it wasn't that bad. The duckweed slid aside as we moved around, but it was impossible to get it out, even with nets - I have tried, in other ponds.

First job on the agenda, then, once in the water, was to remove a self-set willow, which had taken root on the island. This was a bit of a struggle, as it was quite a big one, and there is very little purchase, when you are sinking into mud, and when you really, really don't want to lose your balance. Luckily, I was able to get one knee up on to the island, which allowed me to grope around underwater until I found the roots of the willow, and I was then able to trace them down into the sodden soil, and pull them out, one at a time. Hooray! Success, out came the sapling.

The next job was to dredge out all the sticks and other debris which had fallen in over the past few years, which released a wonderful aroma, as you can imagine. This was achieved using a pitchfork, which was exactly the right tool for the job. Not something I would ever use on a modern, plastic-lined pond - yes, for the obvious reason - but perfectly ok in a natural pond.

Scoop after scoop of rotting twigs, stringy bits of dead foliage, and stinky mud came up, and were gently placed in piles on the side of the pond: they will be left there for several days, to allow the critters time to crawl back into the water, once all the fuss and kerfuffle has died down.

Having worked our way up one side and down the other, we did the bit in the middle, and then gave the island some special attention.

"What's up?" from my colleague.

"Another frog!" I yipped.

There was a heavy sigh from behind me.

More dredging - sometimes it feels as though, no matter how much you dredge up, there will always be more to come out... but we were making progress. Having done all the deepest middle bits, we turned our attention to the shallower edges.

Suddenly, there was a manly scream: well, ok, to be fair, more of an exclamation.

I carefully turned around - the water was, for your information, what I call high-thigh deep, ie not quite up to the crotch, but nearly: plenty deep enough to engender caution when moving around, even in chest-high waders. Did I mention that it's a natural pond? That means that there is no solid bottom as such, it's just mud, mud, and more mud, and quite squelchy underfoot. This makes me particularly careful when turning around, as it's easy to end up with a twisted ankle.

"What does it look like?" I asked, slowly and carefully wading over to join my colleague.

Terrible thoughts of leeches came to mind... but I went and looked anyway. Phew! It was only a Great Crested Newt - and it was a whopper! I have these in my own garden, they are not particularly rare in Oxfordshire, so I'm well familiar with them, but this one certainly was a big one! As we were both in chest waders, we weren't able to get at our phones to take a photo, but here's what one of "my" ones looks like: 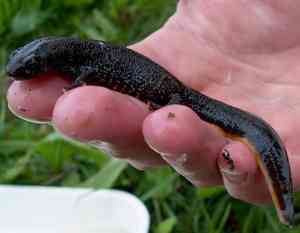 Very dark, almost black: glossy, and if you turn them upside down - gently - they have bright yellowy-orange blotches, underneath.

The one we found today was at least twice as big as this little fellow, left.

Did I gleefully say "It's only a newt, don't be such a wuss!"? No, I did not. I'm nice, like that. Plus, there were huge heaps of stinky mud all around us... better to resist temptation, I decided.

After putting him carefully out of the way - the newt, not my colleague -  we continue clearing and dredging.

There were one or two more minor frog incidents, but nothing scary, and neither of us fell over, so that counts as a good morning's work.

Having extracted ourselves from the pond, we raked up any odd bits of debris into the existing piles, and left it there: as well as allowing the wildlife time to return to their habitat, it's an excellent idea to let pond dredgings drain for several days, because trying to bag them up when they are wet is a disgusting job, plus they stink out your car, if you have to take them to a tip. Much better to let them dry, for weeks if necessary, before carrying out that manoeuvre.

And here is the finished result: 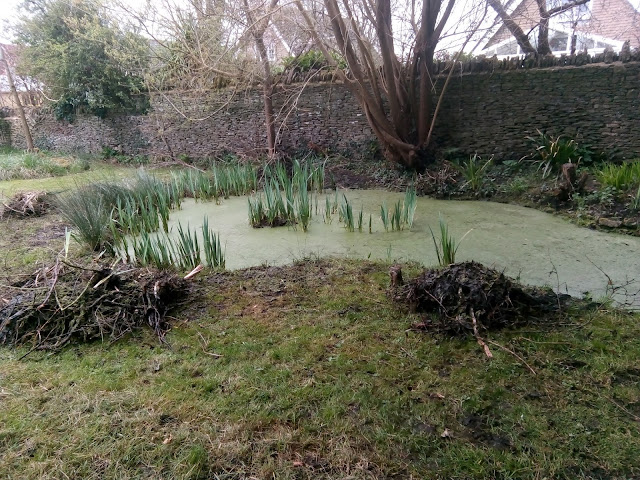 One natural pond, eight neat piles of debris (this is only half of it), and yes, the duckweed closed over the water again as soon as we took our eyes off it.