Pyracantha: how to get the best display of berries

...on a free-standing bush.

I have written about my Pyracantha pruning regime several times - just type "pyracantha" into the search box, top left of the screen, to find them - but usually I'm writing about a trained specimen, usually on wires, usually on a wall. 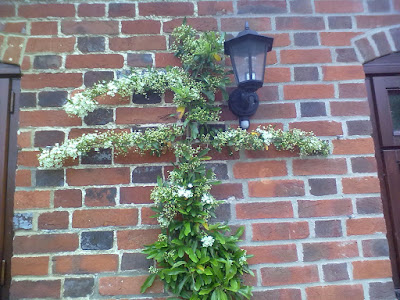 This one is flowering, of course: pretty little white foamy flowers, which then turn into colourful berries later in the year.

A question came in this morning, about how to manage a free standing bush, where you don't have that nice neat framework to prune back to.

Well, the principle is exactly the same: three or four times a year, you just need to cut off the wild exuberant new growth, because the flowers - and therefore the berries - are borne on the old wood, and the new growth is just super-spiky, and therefore annoying.

If you don't prune, then by the time berries are forming, you can hardly see them amongst the new growth, which is a bit of a waste.

But there is a problem with a free-standing Pyracantha - if you let it go its own way, it becomes a monster, tangling itself around everything else in sight, and creating a super-prickly thicket which will defeat even the bravest, boldest gardener.

So, in self-defence, you end up having to prune it, to some extent: and then, before you know it, you have a neat "shaped" bush.  I am a great believer in allowing plants to achieve their proper "form", and I hate it when unskilled labour runs a hedgetrimmer over a flowering shrub - "bunning", as it is known in the trade - but sometimes, well, it's the only way to go.

Here's an example: one of "my" gardens has two large free-standing Pyracantha shrubs, one to either side of the entrance gates, and they need regular attention, in exactly the same was as those which are carefully trained along wires.

This is the top of one of them, back in August of last year: 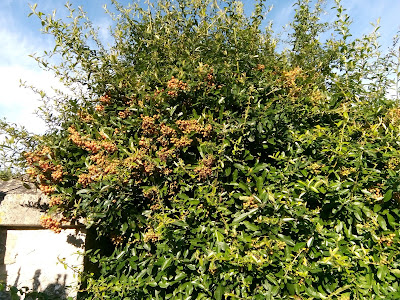 As you can see, it's a mass of green shoots, pinging out in all directions, and although there are berries on it, you can't really see them, because of the excessive growth all around them.

This fresh growth, of course, does not have berries on it, because they don't flower on the new wood, but on the old wood. And of course, without flowers, you don't get berries!

Ten minutes of hard work later, I'd carefully pruned out all those new shoots, cutting them as far back as I was able to: cutting them back "within" the shape, wherever possible.

This left me with something that looked like this: 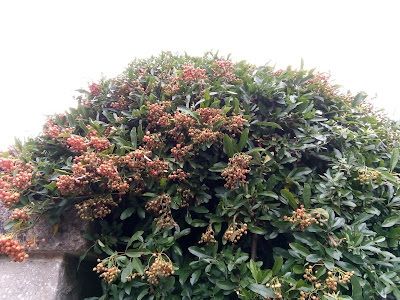 Much tidier, and what's more to the point, now we can see the mass of berries, instead of being distracted by the wild exuberant new growth.

It also makes it easier for the birds to get to the berries: yes, of course we want to see the berries, and get the benefit, but I am always happy, in a way, to see that the birds have stripped the bushes of fruit, because it means that the fruit is being useful, and won't be wasted.

It also means I won't have a hundred or more tiny Pyracantha seedlings underneath the bush next year...

Here's a photo of the entire plant, to give you an idea of the scale: 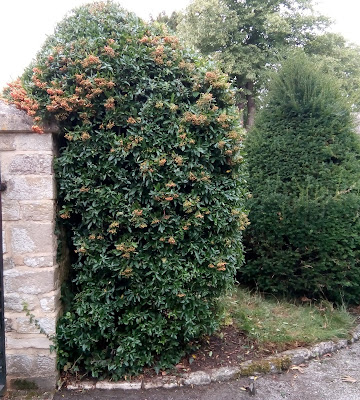 Lovely, isn't it? I always think of them - there's one on the other side of the drive - as Guardians of the Gates.

There we go, then: in a nutshell, if your Pyracantha is free-standing, you can still have the superb display of berries, but you have to accept that it is going to look a bit, er, neat and tidy.