Why does a gardener need a Pickaxe?

Every gardener needs a pickaxe at some point: they are indispensable for removing large clumps, and large stumps, where a normal digging tool such as a fork or a spade is simply not up to the job. 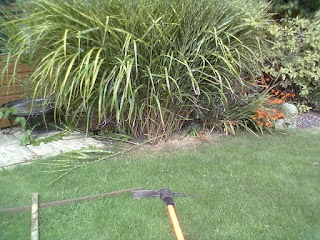 Here's a good example, left: the Client wanted me to remove a massive clump of Miscanthus zebrinus.  It's a wonderful striped grass, but this one had grown too overpowering, for this particular garden.

It was far too big to just dig out with a fork, so I used my Pick-Mattock to get it out: there it is, lying on grass getting ready to attack.

I then used the same tool again, to split the enormous clump into smaller sections, which were later replanted elsewhere.

A pickaxe is also the weapon of choice for removing stumps: tree stumps, big shrub stumps - this tool is definitely the right one for the job. 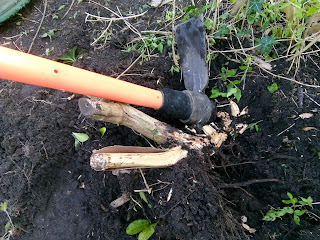 Here I am, right, using it to get out the last sections of an enormous shrub, which had been cut down by the handyman, but not dug out, so it was starting to re-shoot.

Technically, my tool is a Pick-Mattock, not a Pickaxe, before someone picks me up on that point: it has a pointy blade on one side - the Pick - and you can see in this photo, it has a broad scoopy bit on the other side - the Mattock - which is also sharp enough to be used to chop through roots, but really comes into its own,  when it comes to scraping and lifting away the loose soi, and other materials.

I used to have a traditional Pickaxe, which - as the name suggests - has a Pick at one side, and an Axe on the other. But I quickly found that the axe part wasn't used very often, whereas the Mattock-type blade was nearly as good as an axe, for chopping roots, but has the additional use of being like a narrow shovel.

As anyone who knows me, will know, I love multi-use tools, so I threw out my old Pickaxe, and bought a nice brightly-coloured Pick-Mattock instead, and have been using it ever since.

However, it's not what you would call a delicate tool: you need a certain amount of room to swing it,  there is always the danger of accidentally hitting an underground pipe or cable, not to mention the possibility of hurting yourself with it, as they are very heavy - for us female gardeners - and quite unwieldy.

Last year, I was introduced to the Micro-Pick, which sounds like a dental instrument, but turned out to be a completely wonderful addition to my tools. 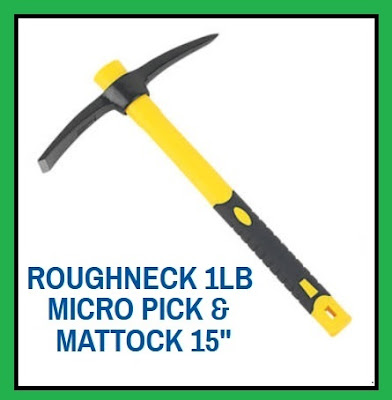 There: isn't he great?

Rather like the Darlac Cut'n'Hold Snapper tool, I looked at it with scorn at first sight, thinking "that's too small and girly to be of any use".

But, as with the Snapper, once I tried it for size, I was hooked!

Designed to fit into a standard tool-bag, according to the product description on the Screwfix site: by total coincidence, the perfect size for female gardeners who have smaller hands than men. IE, all of us.

This tool now lives in my car, and you'd be surprised how often he is used.

And you'd also be surprised - I certainly was - at just how much "heft" you can get, from such a comparatively small tool, especially in restricted areas.

Just the other week, I was faced with a very large Viburnum stump which needed removal, and the owner couldn't get a digger in, because it was at the back of a flower bed.

So I was tasked with getting it out by hand.

I started traditionally, with the border fork, to loosen the soil around the roots, but within minutes I was legging it back to Brian (my car is called Brian, don't ask) for the Micro-pick, who doesn't have a name yet, but really ought to: any suggestions, anyone?

Anyway, the Viburnum was then attacked with the Micro-pick ("Mick?") (yes, I quite like that. OK, Mick he is!).

Here's a picture of the monster: 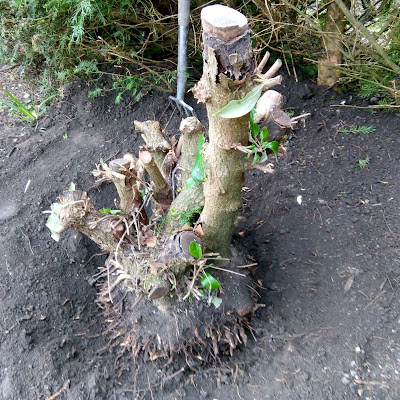 As you can see, the first thing to do is to chop off all the top, the foliage etc,  so that we can get close to the base: but we take care to leave the main trunk at least to knee height, so that we have something to grab hold of, and lever, once we've severed most of the roots.

Next we have to remove a saucer-shape of soil, cutting through all the roots as we go. Out came Mick the Micro-pick, and we chopped all round it.

Once it got to this stage, we were able to rock it: but it was very firmly rooted, so I did have to bring in the big pick-mattock from home: not so much for the digging, as for the levering.

A better tool for the job would have been what I grew up calling a bodging bar - a long, heavy bar of metal, with a point on one end and a sort of chisel shape on the other.

But I couldn't find mine, which was a bit confusing - how can "one" mislay a metal bar that's 5' long? With a damn great point on the end? After turning the garage upside down, I suddenly realised that it wasn't actually mine:  I used to borrow one when I needed it, from a friend. So I had to find one online and order one of my own, and apparently this tool is called a crowbar.

Now, I thought a crowbar was one of these: 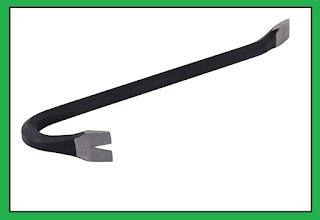 ...which I always think of as the burglars' friend. I have a couple of these, in various sizes: but apparently, this is not a crowbar at all - in fact, this tool rejoices in the title of "Wrecking Bar".

Isn't that a great name?

It's a Wrecking Bar. Great for wrecking pallets, and getting nails out of wood.

Not so good for levering stumps out, because it's too short, and because the nail-removing bit gets in the way.

The correct tool for the job, then, is the crowbar (point and chisel): but a good old fashioned Pick-mattock can also be useful. 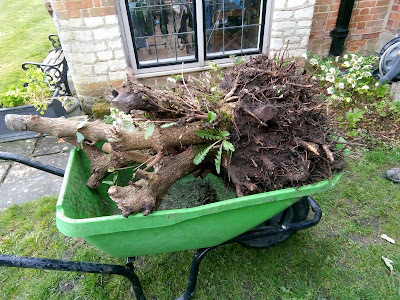 Shortly afterwards, there it was, having a ride in the wheelbarrow, which very nearly collapsed under the weight.

Onto the bonfire heap it went!

Job done: and the moral of this story is, that girls can do anything, if they have the correct tools, and a little bit of technique!