How to retrieve a new-ish hedge...

... that didn't get it's formative training - see this article - and has gone a bit tall and skimpy.

Here's a good example: I received a question about this run of mixed hedging : 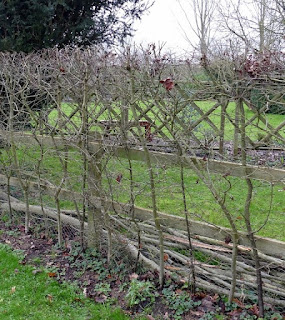 It's a run of Blackthorn and Hawthorn hedging, planted specifically for privacy, but not living up to expectations!

As you can see, it's bare bones down below, just where the density is needed: and it's congested and top-heavy at the very tips, where it's had the hedgetrimmers run over it for the past couple of years.

The owners have tried to bulk it up by piling up tree prunings from elsewhere in the garden, at the base: and last year they added the criss-cross trellis to the top of the post and rail fencing, to try to get the illusion of some privacy, but nothing worked.

This is absolutely typical of what hedging does, if it fails to get the formative pruning, as mentioned in the previous article - there's a link to it, above - and is allowed to just grow and grow.

As you can see, we have pretty much one stem per plant! Heading skywards, with virtually no branches lower down.

"What can we do?" cried the owners, tearing their hair, "Please don't say that we're going to have to rip it out and start again!

Luckily, there is something which can be done: it's drastic, but not as drastic as having to replace the entire hedge. It will start to have an effect immediately, although it will take a couple of years to come to full fruition, as it were

Right, brace yourselves, this is what I suggested.

Year One: ie this year, now, in winter:  cut down every third plant, to about ankle height. These stems will each put out two or more new branches, this year, and they will probably have grown at least a foot or more in length, by autumn. Leave the other two-thirds as they are.

Year Two: ie next winter: look at all those new shoots, at knee height, and cut them down to about a foot (30cm) above the original, ankle-height, cut. Then, turn to the original trees, and cut down every other one, to ankle height, as you did with the first "third".  This is the second "third", as it were, leaving the final "third" at their original height.

Sounds complicated, but once you get going, it's quite straightforward. Here's a cartoon, illustrating the sequence of cuts on any one tree, compared to what happens if you leave it uncut: 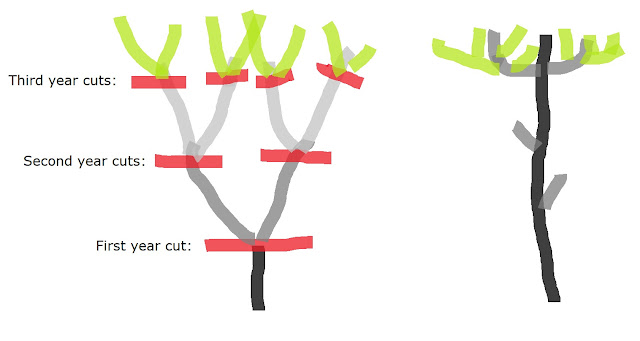 This is a simplification, of course, but it clearly shows how you need to make those formative pruning cuts in the early years, in order to get the bushy growth below.

The advantage of doing this, as opposed to ripping the whole lot out and starting again, is that a) it costs you nothing, and b) you do at least retain some semblance of privacy, while the cut stems are re-growing.

Here is a snap of the same hedge, taken this February, 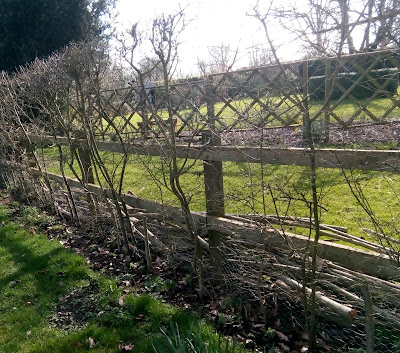 One in three trunks has been cut, and as you can see, there is still some feeling of "hedge", it hasn't destroyed the whole thing: and once the leaves are on it, things will be much improved!

Best of all, though, those cut stems will start sprouting new branches, and will fill up that gaping empty gap.

In order to get this to happen as quickly as possible, I always recommend watering the cut stems - well, to be honest, the entire hedge - at least once a week throughout spring and early summer, and to give it a feed as well: Growmore, in either liquid or granulate form: or liquid seaweed, whatever you have to hand.

This will encourage strong new growth, and will make you feel better about having to slaughter part of your hedge!

Then, next winter, it won't be such a wrench, when you have to do the second "third", as it were, because you will have seen how much new growth occurred, which will give you confidence.

In subsequent years, once the two-thirds have regained the full height, the owners could then take the final third down to ankle height.

All of this regime, by the way, refers to the main trunks or stems: in addition to this, you should run the hedgetrimmers over the whole thing at least twice a year, even if it looks a bit spindly, because this will encourage all the small side shoots to branch, in exactly the same way as described for the main shoots, and thus it will become thicker and fluffier, lower down.

There you go - all is not lost, even if you have accidentally created a hedge on stilts!

Did you enjoy this article? Did you find it useful? Would you like me to answer your own, personal, gardening question? Become a Patron - just click here - and support me! Or use the Donate button for a one-off donation. If just 10% of my visitors gave me a pound a month, I'd be able to spend a lot more time answering all the questions!!/>