I had a question yesterday from Nina (“Hi Nina!” *waves*) concerning one of her potted Hydrangeas, which was looking particularly sad.

To put this question into context, I should tell you that it's the third week in April, but we're having really cold weather, here in 2021: in fact, this is what it looked like four days ago: 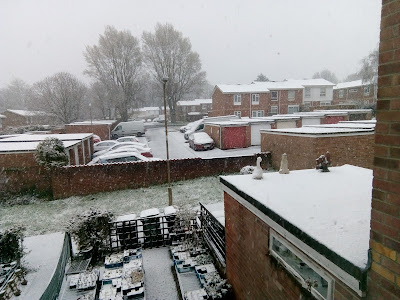 Quite a change from last year, which was apparently the sunniest April on record...

And that's not the worst of it: most plants can cope with snow, the real killer is the fact that we've been having what is called Aprilicity: although I'm not convinced that that's a real word, it describes the phenomenon of April days when the sun is hot, but the air is cold.

We've been having a lot of that, lately: on one day in particular, I went out at 8am in long trousers, fleece, jacket, and scarf: in the afternoon, I was working in shorts and a tee-shirt.

And this is very confusing for the plants! 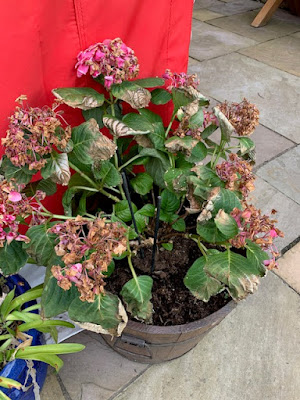 So here is Nina's Hydrangea:

As you can see, it does look a bit battered, poor thing.

But all is not lost, this is what happens to Hydrangeas over the winter, and that's why we don't prune them until well into May.

If you have something similar to Nina's, all you have to do is be patient for a couple more weeks, then carefully prune it down to about half the size it is now: that is, take each stem one by one, and cut it down to roughly half the length, making your cut just above a pair of leaves or a pair of buds.

You can see that the foliage in the "middle" of the plant is fresh and green, and generally looks a lot healthier than the ones on the outside.

That's because it was sheltered by the outside leaves, which have been quite badly frost-bitten.

I do make an exception for the dead brown flower-heads, I should say: I hate the look of them, so I tend to nip them off, once they are starting to look battered and ugly. But I don't cut the stems down until late spring - and Nina's plant nicely demonstrates why.

On balance, then, I am confident that Nina's Hydrangea will recover: my suggestion would be to put up with it for another couple of weeks if at all possible, because those damaged leaves (and the flower heads) will provide a bit of shelter for the inner leaves; they create a micro-climate, in effect. Rather like draping horticultural fleece over delicate plants: the frost will settle on the outer areas - the fleece, or in this case, those already-damaged leaves - and won't affect the inner ones.

Then, a little bit of pruning, and all will be well!