How to create a new hedge

In order to get a good, thick, hedge, there are a couple of principles you need to know.

Firstly, as always, there is the correct preparation of the ground: it's essential to clear away all previous plantings, weeds etc, and that includes digging out rubble, debris, stones etc.

Next, it's usually a good idea to enrich the soil before you start. This hedge is likely to be in place for decades to come, so it makes sense to give it the best start possible.

Then we have the correct choice of trees/shrubs: they should be appropriate in ultimate size for the area, and appropriate for the situation, ie which way it faces, prevailing wind, soil shortcomings, etc. Another consideration is the reason for the hedge: if you want privacy, then evergreens are going to be the way to go. If you want shade in summer, then taller, tree-form hedging will give the best result. If you want a changing "look" from season to season, then pick flowering shrubs, or shrubs/trees which have interesting autumn foliage.

Once they are planted, this is where a lot of people go wrong: they don't understand about formative pruning, and think "Right, we want it tall, so we won't cut it until it has reached the height we want."  They do this, and a year or two later, they contact someone like me, and ask - piteously - "what's wrong with our hedge? It's all thin and scraggly!" and the reason is, because they failed to do the formative pruning.

Formative pruning means that, even though you really, really want the hedge to grow tall, as quickly as possible, you MUST prune it, in order to get it thick and strong, as well as tall.

Here's why - when you prune a shrub or tree, the branch or shoot which you cut, immediately starts growing again, but instead of just re-growing one shoot to replace the one you cut off, they put out two, three or more. This is a result of a phenomenon called apical dominance: when you have just one shoot - ie like a tree, with one main trunk - then all the energy goes into pushing that one up, and up, and up. If you cut off the top of that main branch, the apical dominance is removed, and the nearest buds to the cut will all start to sprout: so instead of just one shoot, you get several.

I explained all about how this works, in an article last year about sorting out a tree which was growing too large: the explanation includes pictures of a laurel, showing the results of the previous year's pruning, so if you're not quite clear on what I mean, go and read that article.

As a further illustration of this phenomenon, here's a lovely photo of the cut end of a huge, old, Yew hedge: the owner needed to put in a gate, so some of the Yew hedge had to go, leaving us with an exposed cross-section: 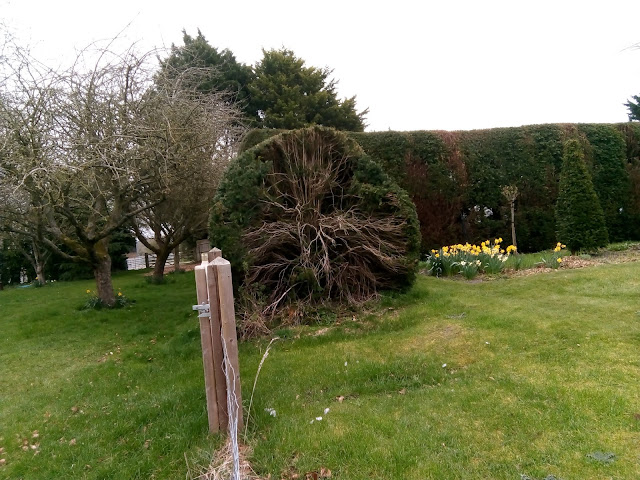 There -  isn't that lovely? Looks just like a lung, doesn't it, with all the branching alveoli.

You can clearly see that there are very few branches at the centre, but they fork and fork and fork, until by the time we get to the outside, it's an impenetrable mass of green foliage.

This doesn't just happen: in order to get a hedge of this size and thickness, it will have been cut back at least once a year, until it attained the size required.

So when you are creating a new hedge, don't just plant it, water it, and leave it: prune it every year, to encourage it to branch. At this point, someone usually asks "how low do I cut it?" which is very much a piece-of-string question. It's hard to give a feet-and-inches answer, as it depends on the species, and the size, of your young hedge. But as a generalisation, I'd say take off about a third of each stem. Then, this time next year, look at it again, and take off about a third of all the stems - there should by two or three times as many of them - and again the following year, until it has reached the height you want.

It may seem cruel, it may seem counter-intuitive, but that's gardening for you!

But what if you've already grown your hedge, and you are less than happy with it - can it be fixed? Yes, it can, and that will be the subject of the next article - how to retrieve a hedge that's gone a bit tall and skinny. Catchy title, eh?!