Well, it's only fair, as Elder often brings me nearly to the point of weeping, when it seeds everywhere, grows everywhere, and had to be weeded out from everywhere.. plus there's that horrible smell  you get, from the foliage....

But now I am a happy bunny, because a few weeks back, I actually made an Elder tree weep!

It was a very old tree, it had slumped down across a fence, as is their wont, as they say (that's an expression, for the benefit of anyone under the age of about, ooh, desperately late forties, not a spelling or punctuation mistake). and the owner asked me to take the weight off the top, before it crushed the fence altogether.

Grabbing my trusty bowsaw, I leaped into action.

OK, let's be realistic: I grabbed my trusty bowsaw, eye protection, gloves, and a pruning saw: then I did a careful risk assessment of the tree (old, fallen) the fence (sturdy, should be ok), and the immediate area (safe): I checked out my escape routes ("if it falls there, I can go that way: if it falls anywhere else, I'm ok over here"), and then I cleared all the ivy away from the trunk, so that I could see what I was doing.

And then I leaped into action!

Much to my surprise, when I started to cut into the main trunk - having lightened it by removing all the upper limbs - it started to leak sap! 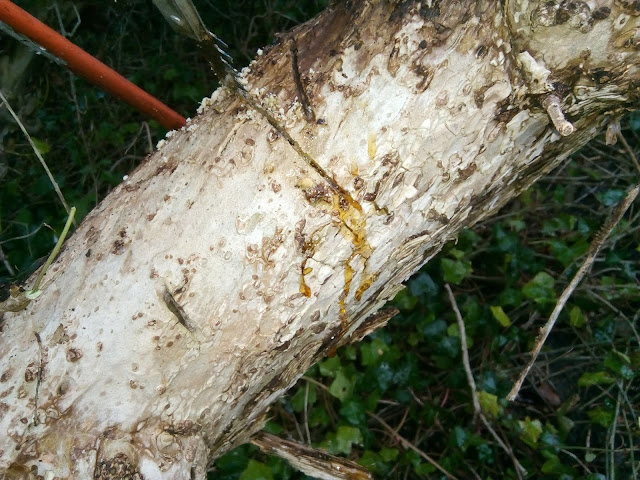 By the time I had finished the cut, it had stopped, and no more came out: there were no obvious sap channels in the wood, no central void or anything like that, so I am slightly mystified as to where the sap came from. 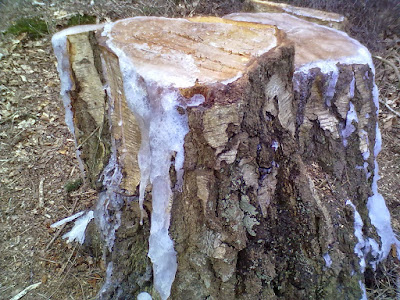 ...this - left - is a stump from some plantation felling, in the depths of winter.

As you can see, the sap has risen from the stump, flowed over the sides, then frozen overnight!

I'm also well aware that Fig trees (Ficus) leak sap when you cut them, as does Cotinus  (and it's super-sticky too, ruins your clothes and leaves you smelling strangely of citrus), and also Mulberry, which can't be pruned any later than about February, along with Walnut, Magnolia, most Vines, including Parthenocissus; and most Acers.