Some time ago - in fact, crikey, six years ago!! - I wrote an article about Lesser Celandine and how to remove it, and today a question popped up, on that article.

For those of you who are too darned lazy to read the first article, even though all you have to do is click on that link.....  Lesser Celandine (Ranunculus ficaria) is a small, low-growing, ground-hugging plant with rosettes of long-stalked rounded leaves, and single bright yellow flowers on stems a couple of inches high. 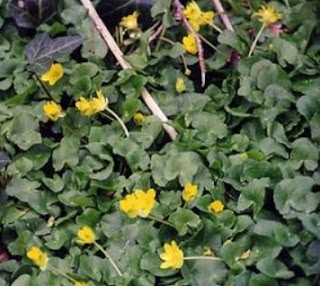 This is what the beastly thing looks like - left - and that earlier article explained all about the plant, how to recognise it, and how to get rid of it.

However, there was one thing I didn't cover, and that is how to get it out, once it has invaded your lawn.

Alas, this is what has happened to one poor reader, who I think is based in Tunbridge Wells: they have managed to get rid of the beast in their flower beds, but it's also in their lawn, and it's taken over a significant area.

The original article did mention weedkiller - with all the usual provisos about not using it unnecessarily, diluting it properly, applying it carefully, etc etc blah blah blah (don't pull that face: yes, we all know that weedkillers are the creation of the devil, but sometimes, honestly, there is no realistic alternative).

But - and it's a big but, if you'll pardon the expression - the situation changes, when you are dealing with weeds infiltrating your lawn.

Why? Well, simply put, because weedkiller may be called "weed" killer, but actually, it should be called "Death To All Green Plants Killer". Yes, if you spray weedkiller on weeds in your lawn, you will kill the lawn as well. Harsh, but true.

So how do we deal with this weed, when it's taking over the lawn? My Tunbridge Wells friend says, in a comment which is striving to be light-hearted and positive, but in which the undertone of desperation is showing through:  "a band perhaps 1.5 meters deep [of the lawn] at the back of the garden is now a 50/50 mix of grass and lesser celandine (morer celandine, we call it). What do you think we should do with the lawn? I don't want to dig it up and re-lay turf as that may be a different colour to the existing lawn, which is quite big. Is there a weedkiller that will terminate the morer celandine but not the lawn?"

Pausing for a moment to hoot with laughter at their made-up name of "Morer Celandine", and biting my tongue to prevent myself from telling them about the real, existing plant which is genuinely called Greater Celandine (in case it sends them into a decline), let's have a closer look at the problem.

If the area of lawn in question is now 50% Lesser Celandine, then this is a major infestation, and it is not going to be easy to get rid of it.

Here are some suggestions, in no particular order:

1) Dig it out. Lift the turf, taking with it a generous slice of soil, 2-3" of it, and burn it. Burn, baby, burn! Whatever you do, don't compost it!! And don't stack it anywhere in your garden, and don't dump in a lay-by (not that any reader of this blog would do something so anti-social, I sincerely hope). Burn it. Nuke it from orbit - it's the only way to be sure. *grins* If you don't have napalm or a nuclear bomb handy, then put it in the council green waste bin, because the way they process the green waste is - I am assured by my local council, and here's the article all about it - easily sufficient to kill all parts of the plant, including those pesky tubercles. And if you don't know what tubercles are, go back and read the first article for yourself.

That is the quick, easy, and painless way to do it.

Drawbacks: you might need to hire a digger and driver, or one of those machines for lifting turf, so it's expensive: you might have to pay to have the soil taken away, as it will be heavy - too heavy to just pop it all in the council green-waste wheelie bin, if you have one - and you will also need to buy in some topsoil to replace what was taken out, and then you'll need to buy turf/seed to make it all green again.The new bit won't match the old lawn at first, but over time, it will become almost invisible.

2) Weedkiller: right, two aspects to this one.

2)a) use a Lawn weedkiller such as Verdone. This is a product designed to kill weeds in lawns, but be warned! Follow the instructions on the pack very carefully, and don't be tempted to apply it more often than instructed, otherwise you will kill all the grass as well. ("I told you so, Judith...") Why? Because Verdone works in a deviously clever way: it is formulated to run off narrow, linear leaves (ie grass) and to sit on the surface of wide, flat leaves (ie weeds) where it gets absorbed, and then kills them. So although it is a chemical, the selectivity of the application is actually "mechanical". It doesn't "know" which bits of greenery are the treasured grass, and which are the hated weeds: it just slides off narrow leaves, and sits on wide ones.  So Verdone is useless on weeds with narrow leaves, such as Yarrow, Plantago lanceolata, etc but it's pretty good on stuff like dandelions, hawkbits etc.

Now here's the gotcha: I don't think that Verdone would have much impact on Lesser Celandine because of the glossy leaves. Anything with glossy leaves - and Ivy is the one which springs to mind - tends to be resistant to weedkiller, because the glossiness causes the chemicals to simply run off, before they have a chance to be absorbed. In the case of the lawn infestation, this might well result in more of the grass being affected, because it will get a double dose: the actual spray should run off the narrow leaves, but then it gets a second coat, as the product runs slowly off the Celandine leaves. I have not tried this for myself, but it seems like a logical conclusion.

2)b) spot treatment: use normal Glyphosate-based weedkiller, but only apply it to the Lesser Celandine. One way to do this, is to get an empty plastic bottle - a squash bottle, or a fizzy drink bottle - cut off the base, and the push the neck over the nozzle of your weedkiller squirty-gun. Hang on, a picture is worth a thousand words, let me search the internet for you... 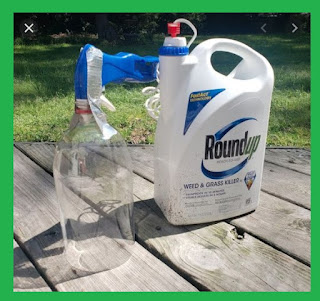 There you go, something like that: the idea is to create a shield around the spray, so it only goes on the plant which you are targeting. So if you plop this down over each Celandine plant in turn, and spritz it with Round-up/Own Brand Glyphosate, then it should reduce the impact on the lawn around the plant.

And please also note that after a few squirts, you get the product dripping down the insides of the bottle shield, and splattering in places where you might not have intended it to go.

There used to be a product you could buy, which was glyphosate-based, but was thick and sticky, like a gel: this would work, if you were to get down on hands and knees and patiently work your way across the immense patch of Celandine, gently dabbing at the leaves of each plant.

But in all these cases, it will take a couple of weeks for the product to work, and when it does, you will find yourself with big round bare patches in the lawn, where the leaves of the Celandine have killed the grass below.

So you'll end up having to re-seed the area anyway... and there will be rogue Celandines popping up over the next few months  in which case, you might as well bite the bullet, and go for digging it out and re-turfing.

And - as mentioned above - although re-turfing an area might seem drastic, it really is the only way to get the stuff out, within a reasonable time-frame: and - as also mentioned - although the new turf will start off looking a lot brighter green than the "old" turf, it will quickly blend in. And you did suggest that the infested turf was at the far end of the lawn.. so maybe you won't notice it, all that much!