The other day, I wrote an article about so-called organic weedkiller, and I briefly mentioned vinegar.

I had a question from one of my lovely Patrons (*waves*) asking for more detail on vinegar, because the internet is full of articles saying how effective it is.

"Use vinegar to kill your weeds" the articles say. "It's cheap, quick, easy, safe, and very good".

My opinion: it may be cheap, quick and easy, but it is far from safe, and it is very far indeed from being "very good" at killing weeds.

So let's look at it in a bit more detail. 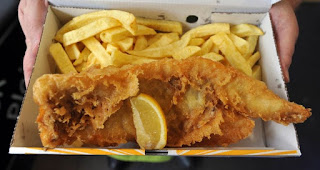 Firstly, what do we mean by vinegar? The chemical in vinegar,  which kills the weeds, is Acetic acid.

Most supermarket vinegars, whether white, or brown, contain only 5%  Acetic acid. For weed-killing, you need over 10%, and some reports suggest even 20%, so regular household vinegar may wilt the weeds, briefly, but they will quickly regrow. In most cases it will do nothing.

As an aside, did you know that most fish and chip shops don't actually use vinegar? I know, horrifying news, but apparently most of them use what is called a Non Brewed Condiment.

Traditional vinegars are made by fermenting alcohol (wine, in the case of wine vinegar; cider for cider vinegar, and an ale made from malted barley in the case of malt vinegar). The fermentation process takes time, and all the colours in the vinegar occur naturally.

Non-brewed condiment, however,  is made from "food grade glacial acetic acid", apparently: diluted with water, coloured with caramel, and with some salt or spices added for flavouring. Why? Because this is a much quicker and cheaper process: it can be stored in concentrated form and diluted when needed, and it has a much, much longer shelf life.

According to Trading Standards in the UK, it cannot be labelled as vinegar or even put in traditional vinegar bottles if it is being sold or put out on counters in fish-and-chip shops... but they all do it.

So don't even attempt to kill weeds with "genuine chip shop vinegar" because it will probably contain even less acetic acid than the "real" stuff!

Right, moving on from that.... vinegar. Acetic acid. For killing weeds.

How does it work?

Acetic acid will kill any plant, regardless of the source. It absorbs moisture from the leaves and quickly kills and shrivels the weed. Be warned, it's non selective, which means that it will kill every plant it touches, including grass, and your precious perennials.

It is also - and this is an important point - a "contact only" weed killer, meaning it will only kill the parts of the plant it touches. That means that it won't work on deep rooted weeds - dandelion, bindweed, Cow Parsley, Hogweed, Ground Elder, brambles ... I could go on, but we'd be here all day - which will simply regenerate. from their roots underground.

Next questions: Is it safe to use vinegar as a weed killer?

Well, for the most part it is "safe", in the sense that it won't burst into flames, or poison your pets, but be warned that higher concentrations of acetic acid can be extremely dangerous. 10-20% acetic acid vinegar is potent stuff, so if you do choose to have a go at this, make sure you use safety gloves, eye protection and - preferably - a face mask at all times. Oh, and try not to breathe the fumes too much.

As well as the possibility of it burning you, if you get it on bare skin, overuse can quickly alter your soil PH, which MAY cause all sorts of harm, and prevent future plant growth.

What are the benefits of vinegar vs commercial weed killers?

It's relatively cheap and readily available. It can work very quickly, sometimes taking as little as couple of hours to eliminate small weeds. Once sprayed it isn't likely to be harmful to the environment, your pets or your children. Kills most garden weeds in one application. No need to exclude kids or pets from the area. Can be used in areas with edible crops. (Allegedly, on that last one. I'm not sure I'd really want all my crops to be delicately perfumed with vinegar...)

What are the disadvantages of using vinegar?

Higher acidity means much more danger.  It won't kill deep rooted or larger weeds. It is not as effective as commercial weed killers. It cannot be used on lawns (to be fair, nor can Glyphosate).  Lower acidity vinegars may not work at all. Can affect soil PH if over sprayed.

Right, so let's assume that, despite all the foregoing, you are determined to give it a go.

How to use vinegar as a weed killer:

There is no need to dilute vinegar, it's already in liquid form which makes it easy for the plant to absorb. Diluting it will only decrease the effectiveness. Put the vinegar into a sprayer bottle,  or a pressure sprayer, so that you apply it accurately and evenly, remembering to use safety equipment. Simply spray it onto the weed,  covering the leaves and the stems. Be careful not to get any on any plants you wish to keep: and don't overspray, or drench: try not to allow the vinegar to seep into the soil, if at all possible.

Can I combine it with salt?

Well, yes: you can add some salt, to increase the effectiveness, but bear in mind that passage in the bible about killing your enemies and salting the ground: salt will poison the soil, and it takes a long time to dissipate.

Whether you add salt or not, bear in mind that if you plan to replant the sprayed area, ie maybe to put grass seed down, or to plant new crops, then you will have to give your soil PH sufficient time to recover. How long is that? Honestly, I don't know, and apparently nor does anyone on the internet. It could be a few days, it could be a year or two, no-one actually gives a duration. Which says something about the general inadvisability of using chemicals which have not been rigorously tested, doesn't it?

Do I need to add washing  up liquid?

Strictly speaking, you don't "need" to, but adding a squirt or two of washing up liquid reduces the surface tension of the plant, allowing the salt and vinegar to be more easily absorbed, thus increasing the effectiveness of both. Just bear in mind that washing up liquid = yet more chemicals, which you are adding to your soil.

Best practices for effective use: Use on a sunny day when the weeds are in full sun. If you do this it isn't uncommon for small weeds to die within hours. Don't use on windy days as it may blow the vinegar onto plants you wish to keep. Don't use when the plants are already wet, ie just after rain, or heavy dew: and don't use when rain is forecast, for the obvious reason. ("because the rain will wash the vinegar off the leaves", of course.)

How effective is it?

Aha,  the million dollar question. It is - according to the internet, I have not actually tried it myself -  highly effective against small or new weeds that haven't become established and don't have energy stores to regrow. Vinegar is a contact killer, for the most part it will only kill the parts of the weed it touches. It won't travel through the plant and kill the roots, as Glyphosate does. It won't be effective against large invasive species like knotweed or brambles.

So, to sum up: vinegar, old story, doesn't really work very well: seriously, would Monsanto have gone to all the effort of developing and testing glyphosate, if vinegar did the trick?