Ah, the hot sunny days of August, in England *glances out of window at crashing rain*...
Yes, apart from the rain, it's summer, and that means it's time to scythe down the grassy "meadows" again: the flowering is mostly over, and now we need to remove the top growth to keep the meadow areas impoverished, and to give the seeds a chance to get to soil level, so that they will germinate for next year.
It's been a busy year for scything, this year: I seem to have been at it once or twice a week, for the last several weeks!
This is actually a lovely thing: I'm very pleased that more people are having a go at "letting the grass grow longer for wildflowers", which includes this year's "No Mow May" movement.
So what I have been scything, recently?
Here's the first one, a small suburban garden, with sweeping crescents of what I call "long lawn", ie not much in the way of flowers, but lots of grasses: 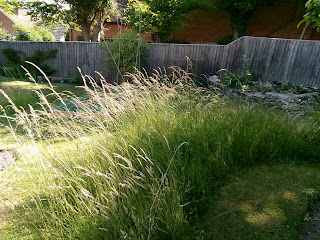 In this garden, we live in hope that some wildflowers will - one year - appear. We've been allowing the grass to grow long since 2018, and so far, as you can see, it's mostly just grass.

I did take along a spare pot of Bee Orchid which I'd grown from seed, and last year that was added to the grassy area. But Bee Orchid are notorious for their poor germination, and their strange habits: one year you will have a couple of flowers, the next year maybe none at all, then on another year, there will be lots of them! They are a rule unto themselves.

But we live in hope. 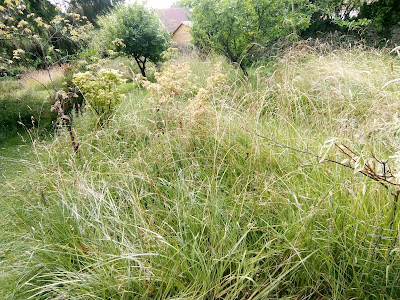 Then there is this garden - right:  a rather lovely long, thin, tree-filled section of garden, which the owner allows to grow long every year, with mown paths: we get quite a few Pyramidal Orchid there, as well as the usual selection of lotus corniculatus (Bird's foot trefoil),  and various vetches.

As you can see, quite wild and woolly at this time of year, and definitely due for scything. 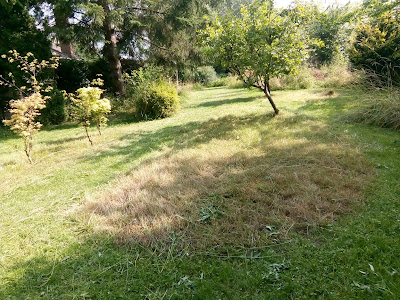 This one took me two afternoons to do, this year: usually the garden owner comes along to rake up the grass, after I cut it: but this year, ill health prevented him helping, so I had to do both jobs, which therefore took twice as long.

And this photo only shows the middle section - there's quite a lot more of it!

But it was worth it, to see it all neat and tidy again. 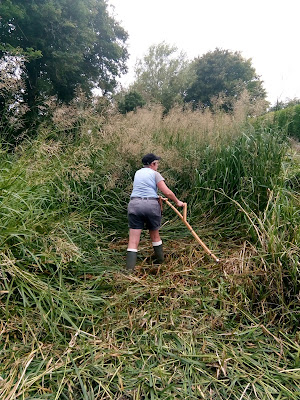 And then, just to make a change, I was working on my local canal last weekend, and was sent into the cut, to scythe down the reeds so that we could get access to the other bank, in order to do some very necessary tree trimming.

An interesting experience, working on very squishy - "uncertain" - footing, with reeds rather taller than I am, as you can see.

But the scythe was the perfect tool for the job, as I could cut very nearly the full width, in one sweep. 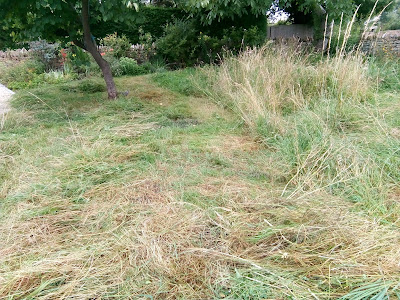 Here's one I did earlier: a small but interesting meadow, again with mown paths, which is getting more colourful by the month, as we keep adding specific plants to it: by scattering seed, and by adding plug plants of various wildflowers.

Here, the grass is so good that we make hay from it... and here I am, halfway through scything it down.

This was a dreadful job, as we had had heavy rain the previous week, which had utterly flattened it, which makes it hard work for me.

But, perseverance paid off, and I got it all chopped down, and into neat windrows. The Client then spent the next week turning and re-turning the windrows, to try to dry it out: but the weather was against them, and in the end about half of it was not dry enough to store, so it was given to the chickens, for them to scratch about on.

Why do I find all this scything to be so peculiarly pleasant? As I said on an earlier post, this is, I think, a great quote:

"There's a massive contradiction between fostering a wild-flower meadow and the brutal savagery of a stinking, angry-sounding strimmer."
I love the concept of the "brutal savagery" of the petrol strimmer. I mean, it's so true! They are noisy, smelly, they use both petrol and oil, the operator has to wear ear defenders, a visor, with eye protection as well (if they are sensible): steel toecap boots, long sleeves, anti-vibration gloves, long trousers... they have to carry the fuel, it stinks out their car, they leak fuel and oil everywhere, and they spit the bits all over the place.
Compare that to me in shorts and a tee-shirt, no gloves, no ear defenders: whistling gently to myself as I swish, swish, swish, the grass down, in nearly total silence, leaving it in neat (ish) rows, to be made into hay if required.
And that really sums it up, for me: if  you go to the trouble of growing your own little bit of wildflower meadow, if you clearly care about the wildlife, the environment: why on earth would you then allow someone to brutalise it, with a petrol strimmer?
Did you enjoy this article? Did you find it useful? Would you like me to answer your own, personal, gardening question? Become a Patron - just click here - and support me! Or use the Donate button for a one-off donation. If just 10% of my visitors gave me a pound a month, I'd be able to spend a lot more time answering all the questions!!
Posted by Rachel the Gardener at 07:30