...but they can still tell us things.

Like, when they need watering, for example. That's an obvious one - they wilt, collapse, drop their leaves and generally look pitiful when they don't get enough water. 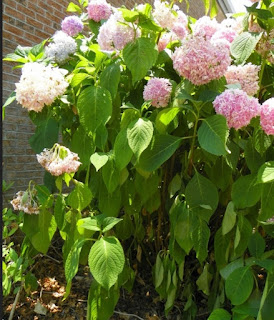 Here's a typical example - left - of a Hydrangea.

These shrubs are notoriously prone to showing water stress, they can be wilting on a hot afternoon, even if they've been watered that morning!

Luckily, they respond well to watering, and usually pick up again quite quickly.

Incidentally, did you know that the esteemed RHS have an actual, genuine expression for plants which have wilted so badly that they will die: it's a three-letter acronym, PWP, and it stands for - I kid you not - the Permanent Wilting Point.

I thought my RHS Level 2 tutor was kidding, the first time they told us about that expression, but no, it's a genuine one. If a plant has reached the PWP, it won't recover. It will, in fact, shuffle off this mortal coil.

Next, Nutrients - plants will often change colour to indicate that they are struggling. 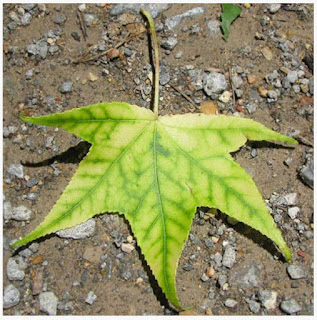 This leaf - right - is showing the classic symptom of what is called interveinal chlorosis.

Chlorosis means "lack of chlorophyll" which is desperately important, because chlorophyll (visible to us, from outside, as the green colouration of the leaves) is where the plant does the photosynthesising. So lack of it, is going to be very bad news indeed.

And the "interveinal" bit is exactly what it sounds like - "between the veins". So you can see in this picture, the veins are still green, but the rest of the leaf blade is pale, and rather yellowy.

In the interests of full disclosure, I should say that there are other reasons: but lack of iron is the main one.

And sometimes, they can tell us about persistent weather: 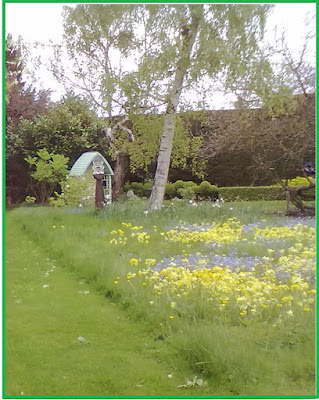 What do you think this Silver Birch, left, is trying to say?

It has two messages:

And indeed, it is leaning towards the sun, and yes, the prevailing wind does get funnelled in from the left, because of the arrangement of buildings and mature trees, which form something of a wind tunnel.

You can't see it from this photo, but every tree in this particular garden has the same degree of "lean" to it!  Every plant which I have added, since my arrival, has been staked and supported in a heavy-duty fashion, in the hopes of keeping them more upright, but I suspect it's a losing battle...