And what, you may be asking, prompted this frivolous bout of non-gardening singing?

Well, passing over the concept that singing in a garden is actually perfectly permissible:  in fact, once, just once, I was working inside a high-hedged garden when I heard someone in the next-door garden singing a folk song. I won't bore you with the details, other to explain that it was one of those where the chorus is normally sung by two parties, a practice which was cunningly invented to allow the "lead" singer a chance to get their breath back and/or to take a gulp of beer.

In this case, I was idly listening, while clipping the topiary, and when the chorus arrived, he sang both parts, which doesn't really work very well.

So I absent-mindedly joined in, as the "second" singer. Yes, I know, I swore I'd never sing folk songs again - I was day-dreaming, ok? So there I was, singing a folk duet with a total stranger.

Just that once. Never again.

Anyway, where were we? Oh yes, singing in the garden is perfectly permissible. Why, just the other week, my current Trainee was singing something called "The Thong Song" which they maintained was a real thing, although I still think they were pulling my leg.

And I was prompted to start singing about cows when I encountered this lot: 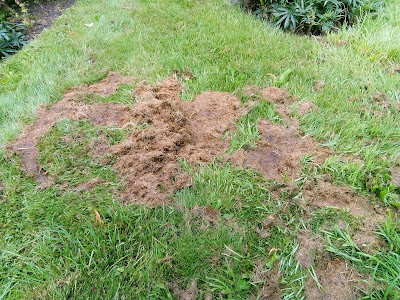 At first sight, does that not look like a big cow-pat?

A particularly large, and messy one?

It turned out to be nothing worse than a mass of grass clippings which had not been picked up by the mower.

This is what happens when two problems coincide: firstly, you don't have a collecting basket on your mower, and secondly, when you let the grass get rather too long!

The mower starts to mash the grass into pulp, so it can't dry up and blow away, because there is just too much of it.

It then rots down into a sticky, icky, mass, especially if rains the day after the grass was cut. And then it kills the grass underneath it, because a thick layer of grass is not a hundred miles away from a thatched roof: and grass does not grow indoors!

The moral of this story is therefore a warning not to let the grass grow too long before cutting it - and if you can't avoid the situation, then go round afterwards and rake up the worst of the fallen cut grass.

Otherwise, it looks as though someone let the cows in - who, who-who, who-who!