I've just had a plaintive plea in from Keith: he says:

"I've had a new panelled fence fitted to my back garden and also a large shed about 9 inches away from it. I've now discovered a bramble growing between the fence and shed but cannot reach to to cut it back or reach the root.

"The gap is too narrow to use loppers (they need a wider space to operate them) and I cannot use weed killer because my cat keeps going in there. I have tried to stop the cat but it's impossible (try making a cat do something it doesn't want to do) do you have any ideas for dealing with my problem (the bramble I mean)?"

This is a horrible situation, and not at all uncommon.   Everyone plonks the shed as close as possible to the fence, to avoid wasting our precious garden space: but it does lead to this problem.

It is far better to leave a gap wide enough for a slender person to just about make their way down it: after all, at some point you are going to want to paint the fence, paint the shed, cut next door's overhanging trees, rescue a fallen bird, etc etc: so it's far better to leave room to get down there safely.

In a perfect world, you'd leave a gap of a yard/metre, and then you could also use it for storage of garden canes, folded-up chairs, etc. But of course, with gardens being smaller and smaller these days, sometimes it is not possible to do the "sensible" thing,  and you have to manage, with what you've got. 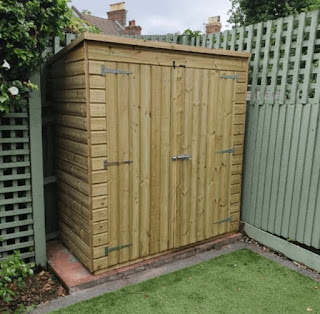 Here's a classic positioning blunder, pinched off the internet - left.

This shed is pushed right into the corner, and is also hedged in by the trellis on the left.

So there's no chance at all of either repainting the fences, when they need it - which they will! - or of dealing with brambles and other weeds creeping in around the sides and back of it.

So how can I help Keith and his kitty-cat?

Well, it's going to involve weedkiller, but first let's look at how to get the main part of the bramble out.

However, loppers also work if you hold them vertically, with the handles opening up-and-down, as it were, rather than out-to-the-sides, so that would be the first option: try to get the loppers in, vertically, and see if you can chop off some of the canes.

However, even if this works, it won't solve the problem, and here's where the weedkiller comes in.

I've checked the Data Sheets for glyphosate, and they state that pets must be excluded from sprayed areas ONLY until the product is dry. And it's a very quick-drying product.

I would therefore suggest buying some Glyphosate-based weed killer: not the ones offering "Instant Death", "Works within 24 hrs" etc: just the plain ordinary Glyphosate weedkiller.

Then grab hold of Mr Furry, and shut him indoors with a bowl of food, and keep him indoors until the area has dried: to be on the safe side, I'd wait for a dry, windy, hot day if possible, so that it dries as quickly as it can: I'd start the job early in the day, and I'd keep the cat away for as long as possible.

If you think that the political prisoner might make a bolt for freedom, then I would put him in a cat-carrier: this might seem like a mean thing to do, but if you are seriously concerned about your pet, then better safe than sorry.

Having excluded the cat, lean in as far as you can, and spray liberally.

Did you enjoy this article? Did you find it useful? Would you like me to answer your own, personal, gardening question? Become a Patron - just click here - and support me! Or use the Donate button for a one-off donation. If just 10% of my visitors gave me a pound a month, I'd be able to spend a lot more time answering all the questions!!
Posted by Rachel the Gardener at 17:07