Oh blimey, here we go again: as Mal (*waves*) pointed out in an earlier article, I am still blithely suggesting that, if you have to use a weedkiller, then it is better to go for one which is just glyphosate, rather than one of the "instant effect" cocktails which are mostly defoliant, and which don't - literally - get to the root of the problem. But it is getting increasingly difficult to buy glyphosate-only weedkiller.

Besides, a lot of people want to avoid chemicals, in which case, you might think about going for a so-called Organic Weedkiller: the two commonest ones are Acetic acid (vinegar, old story, doesn't really work very well: seriously, would Monsanto have gone to all the effort of developing and testing glyphosate if vinegar did the trick?) and, the latest craze, Pelargonic acid.

So now Roundup are fighting back, by piggybacking on the current scare stories about glyphosate, to present us with their glyphosate-free alternative: 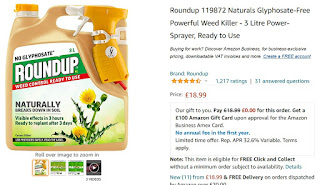 They are calling it Roundup Naturals, which is just hilarious... but we'll get onto that, later.

So, what's it all about?

The active constituent is Pelargonic acid, also called nonanoic acid, which is an organic compound with structural formula CH3(CH2)7CO2H.

Oh all right, I admit it, I looked it up.

More detail: it is a nine-carbon fatty acid: it is a colourless, oily liquid, with an unpleasant, rancid odour.

"Weeds may show first effects within 2-3 hours of spraying"

Ooh, that's exciting, we all love a quick result, don't we? Except that, as gardeners, we know that the quick result is rarely the best one.... and a weedkiller which has quick results is nothing more than a defoliant: it is not a proper answer to the problem, because the weed will grow back from the undamaged roots.

So where does this unpleasant, rancid-odour acid come from? The clue is in the name, the original compound was extracted from Pelargonium. Yes, those smelly conservatory plants, relations of our common garden Geranium. (Geraniums? Gerania? Who knows...) The leaves contain an oil, from which Pelargonium acid can be extracted. Does this mean that it is a natural, organic product? No, it does not! *laughs*.  It is merely named after the plant which originally provided the substance: most of it is now synthesized.

Next question: whether naturally harvested, or synthesized, how does it actually work?

Translation: vast amounts of it will destroy the cell walls in the soft green parts of the plant, leading to fast wilting and death.

However, the roots are unaffected, and woody growth is unaffected: it only works on young, soft, green growth.

What else do we know about this wonder product?

It's quite scary, actually: Pelargonic Acid is also used in riot control: if you don't believe me, check it out for yourself.  To be exact, Pelargonic acid vanillylamide (PAVA or nonivamide) is the product - and, as an aside, the majority of PAVA is derived from synthesis rather than extraction from natural plant sources, so does it really count as "organic"? -  which is used, but in order for PAVA to work, it must be directed at the subject's eyes. The pain to the eyes is reported to be higher than that caused by CS tear gas.

My next question is, would you drink it?

"The Food and Drug Administration (FDA) has approved pelargonic acid as a food additive, and as an ingredient in solutions used commercially to peel fruits and vegetables. These approvals indicate that FDA considers it safe for humans to eat food containing small amounts of pelargonic acid."

The above quote is taken from a US EPA (Environmental Protection Agency) document titled "Pelargonic Acid Fact Sheet". (Although it is dated 1st April, not sure if that is relevant or not...) It should be reassuring, to read that the same product we are using to kill our weeds, is used to peel our fruit and veg, but somehow, that information makes me vaguely uncomfortable. Maybe, because it underlines that small amounts of it are good and useful (ie the food preparation) but when applied in large quantities, it kills things. And perhaps I'm not comfortable with the concept of applying "a lot" of a chemical.

Moving on to other bits of Small Print on the label:

Ever wondered that that means? Well, CMIT is - brace yourself - Chloromethyl-methylisothiazolone. There, now you know.

Sorry, what was that? You want to know what it is, and what it does? Well done, these are the questions that you should be asking, if you are really committed to organic, earth-friendly, weed control.

Put simply, it's a preservative, to inhibit the growth of mould, ie to extend shelf life. So, your so-called organic product is stuffed full of chemicals to stop it going stinky in the bottle.

How many people actually read that, I wonder? And of those, how few obey it? Just above that command, there is the instruction to "Repeat as necessary after a minimum of 7 days" so that cuts it down to only being used twice a year. Hmm.  And also suggests that the product regularly does not work very well, and needs to be reapplied. Hmm, again.

3) "It is most effective on young weeds, smaller than 10cm"

Good to know - won't have any effect on the main crop of weeds, then? And, as we already know, it won't affect anything with a stout, woody stem - which makes it great to use for teeny tiny weeds under the hedge, but won't do a thing for brambles.

Now for a minor diversion: the same product is available in Australia under the brand name of "Slasher" (*snorts through nose*) and their marketing information proudly states:

"SLASHER Weedkiller contains 525g/L (Pelargonic acid) Nonanoic acid. Pelargonic acid is a fatty acid which occurs naturally as esters in the oil of pelargonium plants. It can be made synthetically, however, to meet Organic Standards the Pelargonic acid in SLASHER is produced sustainably from biologically based raw materials using an environmentally sustainable patented method  of extraction."

What does this mean? It means that any product which does NOT make that exact statement, is using the artificially synthesized Pelargonic acid, not the "natural" or "organic" stuff.

Personally, if I had to use a chemical, I'd rather use one that was synthesized and was therefore consistent in strength and effectiveness, and did not require the death of huge numbers of plants, in order to extract it. Call me old-fashioned, but there seems to be a slight mis-match in the concept of " oh goody, we can kill lots more plants in order to extract the herbicide that we need to organically kill these other plants."


There's another teeny tiny "gotcha" in the instructions for that product: it states that you must agitate (shake) the spray bottle every 5-10 minutes, in order to keep the product "well mixed in the spray water". So if you - like most people - don't bother to read the instructions properly, you will find that the first 9/10ths of the area which you spray is barely affected by the weedkiller, because you didn't shake the bottle every five minutes, and all the active ingredient has settled to the bottom. Or risen to the top, it doesn't specify which.

So, what does all this mean? What, if you are interested, is my opinion?

I think we should all be very careful of glyphosate alternatives for the moment. Many of them are products which have been press-ganged into weed-killing, having formerly had very different uses. And, whatever your opinion of Monsanto and the whole glyphosate issue, it did go through stringent, lengthy testing, before it was released to the general public.

Finally, getting on my soapbox a bit, the term "earth friendly organic herbicide" is a logical fallacy.  It is no more than marketing, intended to sell a product.  Pouring chemicals on the earth is NOT friendly, nor is it ORGANIC.  The whole phrase is carefully designed to sell their glyphosate alternatives....... as you will know if you have read any of my articles on bramble removal (of which there are now many! Go to the "search" box, top left of the page, and type in the word "brambles", if you would like to know more on that subject), I am not in favour of weedkiller, but I accept that in some situations - ie brambles! - there is no realistic alternative.

The earth-friendly, organic way to deal with weeds, is to dig them out and compost them.

Well, this brief article has turned into a lengthy one: but I do feel that there is no point me sitting here and just typing "Organic weedkillers? Nah, don't bother, they're crap" because what good does that do? How would that help you to make your own minds up?  Instead, I like to do the research, find out some facts, and present them to you, all neatly wrapped up in one - looooong - article.

And I hope that it helps you to understand what you are buying: if it did, then, seriously, please consider making a donation, or becoming a Patron.