How to Help Wildlife - Big Things

Yesterday, I was prompted to write about how the "re-wilding" trend does not have to be followed slavishly.... and I added a few simple suggestions as to how to help wildlife in your garden.

If you really want to help wildlife, and you've either done as much in your own garden as you can, or you don't have much of a garden in which to work, then here are a couple of bigger things which you can get involved with.

1) Pester your local council to link up isolated areas of greenery, to produce what are called "linear features" . OK, this is a big one: but every little helps, and every letter to a local councillor is one more for the pile, and eventually, things will improve.

To illustrate the importance of creating what are trendily called "linear habitats", here's a photo of a fairly typical "new development" of houses, in a small town. 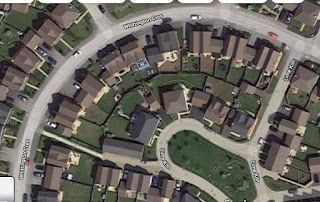 Very trendy, isn't it: nice curving roads, which look so good on the plan, but in real life, mean that you can't follow the house numbers, so you can't find anyone: there's nowhere to stop and check, because there are no lay-bys or spare parking areas, the roads are so narrow that two cars can barely pass, and there are no pavements at all: everyone seems to be overlooked by everyone else, so there's no privacy in the gardens: and half the houses have really odd-shaped gardens, unusable and awkward.

But the important thing here is to look at those tiny, awkwardly-shaped back gardens.

Can you see how the fences split them up into units: this illustrates the importance of the Hedgehog Highways. But even if you get together with your neighbours, and allow free passage for Hedgehogs, where will they go at the end? All the blocks of housing are isolated, and surrounded by roads. Even the laughably small "green play area" in the centre is surrounded by a road.

So when the developers submit their plans, go along to the planning meetings, and challenge them to link up the green spaces, instead of cutting them up into tiny blocks.

2) Support your local canal restoration group: canals are the ultimate linear wildlife corridor, and contain water, banks, trees, undergrowth, overgrowth, muddy bits, dry bits, and virtually every habitat that wildlife could want - all conveniently linked together, and with a towpath on just one side, providing a haven and an escape route for all the wildlife on the far bank, while allowing us to walk quietly and peacefully along the other side, and to enjoy watching the wildlife flee in terror before us.

Please note that nothing likes a derelict, stagnant canal: not even the wildlife... so it's really important to support the work of restoration groups, and to get the old canals opened again, for leisure and for wildlife.

Oh, and as a long-term supporter of canals, can I just say here that, on a working canal, the water is SUPPOSED to be brown and murky! It stops the weeds from growing and choking the waterway.

Brown water is good: green, stinky, slimy water is not.

3) Get involved with Botany: learn about it, take some courses, learn how to use a Dichotomous Key, learn about identifying local wild flowers. Take this interest to your local schools: encourage them to take the children out on nature rambles, and to build School Gardens.

4) Join a local nature reserve, as a volunteer: they are always desperate for free workers, and there are usually many roles to choose from.   I prefer the active work, such as work parties to clear the undergrowth and manage the greenery, but there are always heaps of admin roles, from local publicity, to accounts, to fund-raising (all volunteer-run groups are always desperate for help in fund raising!), and there is bound to be something that suits you.

5) Go out litter picking. If there is a local group, who meet up regularly, join them. But if there isn't, just buy yourself one of those long-handled pickers, they only cost a couple of quid: then go out, every so often, armed with the picker, and two carrier bags - one for "rubbish", one for recyclable tins and bottles. Fill the bags, take them home, put them in your own bins. Yes, you will get a strange look now and again, but most people will thank you for making the effort. Yes, you shouldn't "have" to do this, but let's face it, in the real world, people do drop their litter, and the council do not have the resources to pick it up - and it's our wildlife which suffers the consequences.

It is also scientifically proven that litter begets litter: if a footpath is already littered, people will drop more. But many habitual litter-droppers are reluctant to be the first one...so if you reduce the amount of litter, by picking it up, then the amount of new litter will decrease.

6) Local footpaths: put pressure on your local council to keep your local footpaths clear and open. This means asking them to cut back overhanging greenery, and to keep the grass cut short: if they say they don't have the resources, get some local groups started, of volunteers who will walk round and do a bit of chopping and cutting. Yes, there are insurance implications, but as with litter-picking initiatives, local councils are starting to realise that they can't do it all themselves, so they have to work with locals, and with volunteer groups.

You might be wondering why "clearing the footpaths" will help the wildlife: the answer is that if the footpath is clear, and passable, then walkers will stick to it: they won't wander all over the place, trampling the wild flowers and disturbing the hedgerows, pushing through hedges into fields to find alternatives to muddy or impassable paths, and generally spreading themselves out, far and wide.

So there you are, a few suggestions on how to get yourself a little bit more involved with wildlife on a local, but larger, level. I am sure you can think of some more!