How do plants just "appear" in gardens, and in the wild?

I'm sure you've all seen this sort of thing -   a sudden outcropping of a particular "weed" in one part of the garden, when it is nowhere to be seen elsewhere. 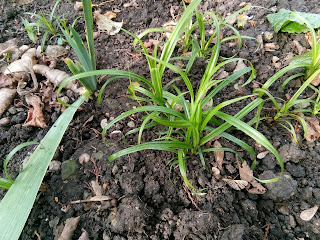 This particular one - left - is Carex pendula, common name Pendular Sedge, and it's often sold as a garden plant, which is why I put the word "weed" in quotes. As you probably know, there is a saying, within gardening, that a weed is only a plant in the wrong place.

In this case, the weed in question is a rampant self-seeder and a flipping nuisance, and it seems to have a mad determination to plonk itself in the "wrong" place at every opportunity.

This is a large garden, with no Carex pendula in it, not anywhere: I've looked over fences into as many neighbouring gardens as I could without being arrested, and I can't see it anywhere nearby.

And yet, here we are, a nice little clump of them appearing amongst the Bearded Iris.

The same thing occurred last week, when I was talking to my current Trainee about weeds: I always think it's very intriguing, the way you can  have eight otherwise identical beds, as we have in the Big Knot, all with the same Box hedges around them, all with the same planting within each quadrant, and yet you get different weeds in each one.

Well, to be accurate, you get a different "set" of weeds in each one. One quadrant might have a lot of one particular weed, which doesn't appear in any of the others. Or, seven out of eight of them have a particular weed, yet the eighth bed doesn't.

It's very interesting..... well, I think it is. Let's face it, hand weeding is one of the less intellectual aspects of being a Professional Gardener, but I enjoy it because - like edging the lawns - it gives my brain ample time to go a-wandering, and although I do spend quite a lot of this time preparing the next book, or composing blog articles in my mind, it also gives me time to wonder about things. I call it "having an enquiring mind" - I like to know why things do what they do, how they work, how they grow, why are some things different, why are some the same:  I seem to have an endless capacity for asking questions, and I often wish I didn't have to earn a living, so that I could do research all day long.

So, getting back to our weeds: the same question arose, again,  when one of my paying Students asked a question, having found a colony of Helleborus foetidus (Stinking Hellebore, unfairly named if ever a plant was, and hopefully joining forces with Scabious to create an action group to Rename Unfairly Named Plants) in some woodland, with no apparent reason for the colony being there.

How, they asked, did the first plant get there?

Well, the answer is all to do with transmission - how do plants spread themselves naturally, and what additional vectors are there, which might be called "un-natural".

The first and most obvious ones are wind and weather: many plants have tiny, super-light seeds that can quite literally be blown around on the wind. Very natural indeed.

The next most likely are birds: yes, our feathered little friends have a great capacity for picking up seeds, either on their feet or feathers or - more often - by scoffing the seeds, and then pooing out the reproductively active parts later. This is an excellent method of seed dispersal, not least because a pooped out seed may well have a protective coating of poop on it, which may protect it from being eaten again, and may well contain moisture and even nutrients, to help it germinate. This also counts as natural, because the seeds need to make themselves edible and attractive.

Even the "caught on the feet or feathers" route could be considered natural, because the seeds will have evolved a degree of stickiness, or barbed-ness, in order to latch on to the bird.

Then we get to the less natural methods: the dumping of garden waste, for a start, which is prevalent in lay-bys, edges of woodlands by gates where there's room to pull a car over etc - anywhere that lazy people can stop, unseen, to dump their waste. This accounts for some surprising garden escapes, and some very undesirable ones, too, such as Japanese Knotweed.

Such dumps then often lead to further "un-natural" transmission, because if there's room to park a car, you will often get dog walkers, which means muddy boots, which can easily pick up seeds from the layby areas, which get trampled all through the woodlands and rough areas.   Even the dogs are helping - not just their muddy paws, but their [disgusting] poop, which may well contain seeds or material from the owners' garden.

And of course the vehicle tracks will pick up mud, and seeds and/or plant material from the first dump site, and take it to other places.

Within the garden, there are all those methods and more:  you will often find actual garden plants, not just weeds, popping up in random locations. Clients will often say 'No, I didn't buy those Xxxx, they just appeared there.' Strange, but true.

Every time we dig up a plant and move it, we may be taking seeds from other plants along with it: every plant we buy from a garden centre may well have its own time-bomb of seeds (and sometimes you get plants which are completely mis-labelled, which is always fun); every time a kind neighbour or friend gives us a plant, it could have absolutely anything living in the pot, and that includes unwanted garden pests as well as weeds: every time we mulch, we might be inadvertently bringing seeds into the garden, and of course our own home-made compost is well known for being full of weed seeds.

Even wood chip can contribute -  I had one Client who received a big bag of chipped garden waste from a friend,  and spread it on their vegetable area.  They were quite surprised, the following spring, to find a flourishing colony of Buddleia: yes, the small wood-chips were sprouting. Luckily (for me) they were very easy to weed out.

So you can see that there are many ways in which plants can "walk" around the countryside, and indeed can walk around, within our gardens: and there's something to be learned from these weeds - apart from an insight into what your neighbours are growing, of course - because the way that plants arrive and spread themselves in our gardens, is very relevant if you are wanting to create a 'natural' or 'cottage garden' look.  Don't plant neat groups of three or five, symmetrically placed: plant them in straggly groups, untidily arranged: or in 'drifts', to emulate the natural spread of wind-blown seed.