Were you given a lovely bowl of Hyacinths as a Christmas gift? Are the flowers just starting to go over?

Don't throw them away!

Yes, they can be planted out in the garden. No, they won't flower at Christmas next year, if you keep them indoors: the bulbs we are given as gifts have been “forced” to make them flower very early. Forcing was invented by the Victorians, and involves chilling the bulbs for several weeks, then keeping them in a regime of restricted light, to mimic winter. This makes them think it's spring, when it is actually just before Christmas, and that's why they flower so early - and why they won't do it again next year.

However, they are still ordinary Hyacinths, and if you plant them out now, as soon as they have gone over, then they should recover and will flower in the normal, outdoor, fashion next year, and for many years thereafter.

I've done this for years, and several of “my” gardens now have lovely spring flower displays, all from rescued Christmas gifts.

To help them have the best chance, here's what to do:

Remove all the fancy packing, including any support canes, string, moss, tinsel etc.

Decide whereabouts in the garden you are going to put them: somewhere where you can see them from the window is nice. Often a mixed border will be quite unexciting at this time of year, and they can be slotted in between the cut-back perennials.

Make sure that the soil is not frozen solid! If it is, keep them indoors until it's soft again.

Shake off as much soil as possible, leaving the white roots intact.

Cut off the flowered stems as low down as you can, leaving the leaves intact.

Plant the bulbs as deep as you realistically can - aim to go at least 6” or more downwards, so that the bulbs are well protected from ground frost, and from being dug up by squirrels and other rodents.

Try not to dig a tiny, trowel-sized vertical tunnel, as it will then fill with water next time it rains, and the roots of your bulb will rot. Instead, dig out a reasonably wide hole, and make sure you loosen the sides and bottom of the hole once it is deep enough: don't just chip out the bare minimum. 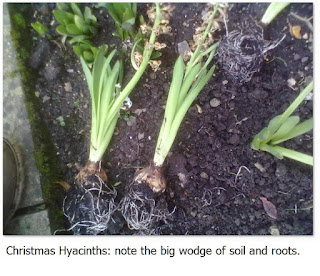 Shake the roots out so they go sideways instead of being bundled underneath the bulb.

Here -  left, you can see the wodge of compressed roots, which is a result of being in a decorative pot.

Shake them firmly to get that old, stale compost off, but try to leave the white roots intact if you can.

Sit each one down on the loose soil at the bottom of the hole, and then pack the soil back around it, making sure it is pushed well down onto the bottom. This is to avoid having an air gap under the bulb, which will kill the roots. 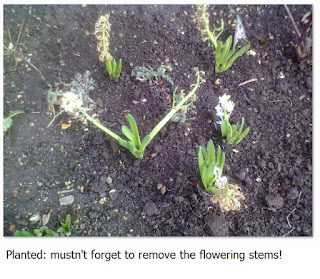 Here are some I planted out - this was actually last year, in the second week of January, which is about the usual time that people start to throw out their Christmas flowers. 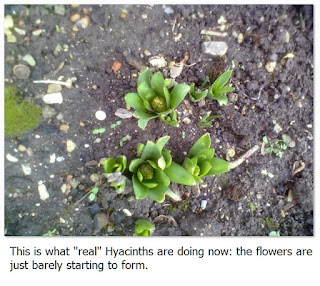 For comparison, I took a photo showing the ones I'd planted out the previous year.

As you can see, they are just pushing up their flowering spikes, and this is what you might call their "natural" time of year for flowering.

Having finished the planting, if your soil seemed to be nicely dry and crumbly, water them in: if not, just leave them, there will be sufficient water in the soil.

Leave them to settle in, and die down naturally, over the next several weeks. If you want to give them a boost, give them a foliar feed, a week or two after planting: any liquid feed will do, liquid Growmore, seaweed, or even Baby Bio: not too much, just a light shower.

Don't expect them to flower again in a few weeks - they've done their bit for this year. But next year, at about this time, they should be poking their noses up, along with all the other garden hyacinths, and for years to come, they should be back every year.

Best of all, if they were a Christmas gift, then they are, in effect, plants for free!