Amaryllis: don't throw them away after Christmas!

Like Hyacinths, Amaryllis are a popular Christmas gift: but unlike Hyacinths, they can't be planted out in the garden afterwards, so they often get discarded, once they have finished flowering.

What's an Amaryllis, I hear you ask? 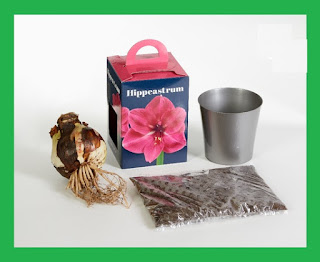 ...as a gift for Christmas. You get one enormous bulb, a small amount of compost, and a pot.

The idea is that the recipient opens the box at Christmas, plonks the bulb in the pot with the compost, and then - usually a few weeks later - enjoys the beautiful flowers which grow from the bulb.

The flowers are quite spectacular - huge long stems, and enormous flowers. 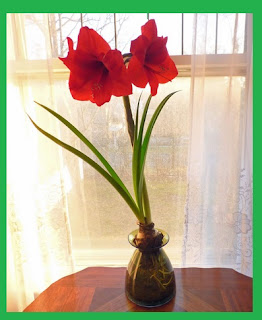 There - you can see how big they are.

They make a very popular Christmas gift, but alas, once the flowers are over, there's not a lot of point keeping them, because - as mentioned - they are not hardy plants, to be shoved outdoors in the garden: no, they are tender house plants.

So why don't people just keep them indoors and let them grow again? Well, they do, but they won't flower at Christmas, they'll flower in the summertime. Which is not a bad thing, in itself....but they are seen as Christmas flowers, for some reason.

However, they can be persuaded to flower at Christmas again, it just takes a bit of time and persistence.

Oh, and before we get on to the whole "how to make them re-flower next Christmas" part, I need to warn you about a level of evil called "waxed bulb" which means, as the name suggests, that the bulb has been coated in wax. These ones will not flower again.

Why not? Because they have been coated in wax, after having had their roots and basal plate cut off.

This shocks the bulb into flowering, because it knows it is about to die.

It is completely beyond me, how someone who presumably works in the horticultural business could have invented this method of killing selling plants. They are sold as "no watering, no mess, no pot, just pop them down on your table and they'll flower for you!"

Excuse me while I have a brief lie-down...

These ones have been very carefully prepared, in order for them to be ready to flower just after Christmas: they have to be allowed to dry out, stored in the dark for several weeks, then brought out into the light at just the right time.

Too soon, and the bulbs are shooting before they can be given. Too late, and it's a disappointing gift that doesn't do anything.

Which is why they cost so much money! That, and the fact that they take five years to get to flowering size..... which is all the more reason not to throw them away, after just one blooming.

So, what do you with your post-Christmas Amaryllis? It flowered, it was spectacular, but it's now February and the show is over. Time to bin it?

Instead, keep it growing: give it a little water each day, and once a week, add some concentrated plant food: a couple of drops of Baby Bio would be fine. Cut off the flowering stem, as low down as you can, and discard it, and keep the rest as a sort of house plant.

Once the weather gets better, in late spring, put the whole thing outside: you can plunge it into the ground (which means leave it in the pot, dig a hole in a bed or border, and shove the whole thing underground, pot and all) or you can tip the gigantic bulb out of the pot, and plant just the bulb.

Once it's outdoors, continue to feed it once a week or so, and now you can use Growmore, or any balanced feed.

Round about mid August, dig it up and bring it inside: shake off the soil, or wipe off the pot, and put it somewhere dark, and dry: you want it to go dormant, so don't water it, don't feed it, just leave it to dry up. Cut off the foliage once it has definitely died, and leave the rest of it in the dark, dry place: a garage is ideal, or the under-stairs cupboard, perhaps.

Now for the tricky part: waking it up!

It needs at least two months in the dark, so at some point around November or early December, bring it into the light, trim off any remaining dead foliage, and re-pot it, if necessary. As you will have seen from the pots they came in, they don't need a lot of room for their roots, and usually the pot is barely bigger than the size of the bulb.

Pot it up, and sit in somewhere indoors, where it gets lots and lots of light: a sunny south or west facing window ledge would be perfect. Water it enough that the compost is just moist, but don't keep watering it until it starts to sprout.

This is the exciting bit!

Sometimes they only take a few days to start sprouting, sometimes it's as long as 6 weeks: you won't know until you try.

Sometimes they send up leaves first, sometimes it's a flowering stem - it's easy to tell the difference, because the leaves are flat and thin, and the flower spike will be thick and fat. Don’t worry if your amaryllis starts growing leaves first, that doesn’t mean it won’t bloom.

As soon as your amaryllis starts to grow a flower spike, make sure it’s getting plenty of light, give it a little water every day, just enough to keep the compost moist, and - the really important bit - make sure to rotate the pot a quarter turn, daily.

Otherwise you will end up with a Leaning Tower Of Amaryllis, and that just looks weird.

Here's one I bought for someone else last year, but wasn't able to give to them, so I kept it myself: I'd never actually grown an Amaryllis bulb before, because - being what you might call an 'outdoor' gardener - I am hopeless at keeping house plants alive.

However, I was forced to look after the one I'd bought: being a gardener, I couldn't let a plant die, not even a house-plant, and I was hoping that, once it had flowered, I would find someone locally that I could offload it to. BUT! Once it started to sprout, I was fascinated by the speed at which it grew: and once the flowers opened, well, I was amazed. The flowers were gorgeous: pure white, huge, and beautiful.

So I decided to keep it.

I followed the above regime, and look! 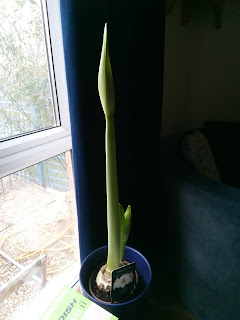 By the 6th of Jan, it had made one huge flowering spike, and a second one was just starting.

Ten days later, the flowers started to open, and by the 19th, there two beautiful white trumpets, with two more just starting to open. 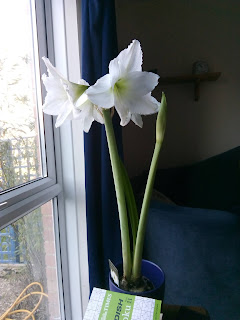 Here we are today, the 22nd, all four flowers on the first spike have opened, and you can see that the second spike is nearly as tall as the first one  and hopefully, will have another four flowers, once it also opens.

Note how straight and relatively upright they are -  this is achieved by doing the quarter-turn rotation every day without fail.

It's quite incredible to see how fast they grow, and to see how quickly they start to lean towards the light.

As you can see, I have huge windows, which does help.

So there  you have it, how to encourage a Christmas gift to keep on giving!

I am planning to do the same again this year: I'll keep it as a houseplant through spring, then  bung it out in the garden for the summer: I'll drag it back indoor in August, and throw it under the stairs until early December.

If you don't fancy doing all this: if you think it's too much work, or not worth the hassle: then please send me your unwanted Amaryllis bulbs - I'll look after them!!!

Did you enjoy this article? Did you find it useful? Would you like me to answer your own, personal, gardening question? Become a Patron - just click here - and support me! Or use the Donate button for a one-off donation. If just 10% of my visitors gave me a pound a month, I'd be able to spend a lot more time answering all the questions!!
Posted by Rachel the Gardener at 14:07