Mushroom and Fungi - what's the difference? (and what about Toadstools?)

This question came in from a former Student the other day: what's the difference, botanically speaking, between mushroom and fungus, and where do toadstools fit in?

Right! It's actually quite simple.

Not so - many innocuous-looking mushrooms are poisonous, some fatally so: 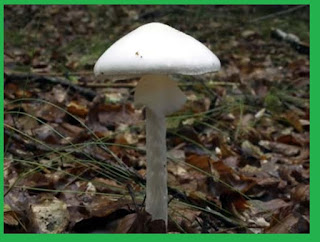 ...like this rather lovely-looking, pure white fellow, whose name is Amanita virosa.

Doesn't sound too bad, does it?

The common name, though, is Destroying Angel and it is "deadly poisonous."

Go on, look it up for yourself. Looks pure as the driven snow, but it will kill you. One small mushroom is enough: it contains specific amatoxins, which are described as one of the most potent and lethal biological toxins in nature. The chemical which kills you is what is called "thermostable", which means that cooking does not destroy it: and just to make all our lives complete, it can resist drying for years. 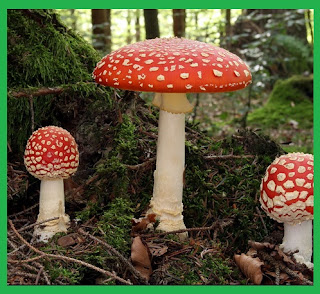 ...which is possibly the most fairy-tale-looking of all 'toadstools' - Fly Agaric or Amanita muscaria, to give it the proper name, is actually not poisonous.

Yes you heard me. Won't kill you.

It will make you hallucinate, and feel as sick as a dog, but it won't actually kill you. It might make you wish that you were dying, but - eventually - you will recover.

So that's the first lesson about Fungi: the words Mushroom and Toadstool are interchangeable.

The second lesson is the difference between mushroom and fungus.

Mushrooms are the bit we see - these things: 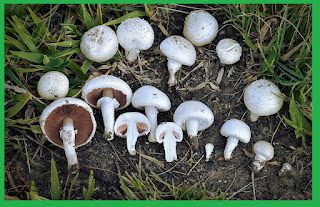 Knowledgeable people, who like to be grammatically correct,  might point and say "Ooh, look, Fungi!"   because that is the plural of Fungus.

Is there a plural of mushroom?  Mushri? No, it's mushrooms.

So what's the difference?

Technically, a fungus is an organism: it's not an animal, and it's not quite a plant either - it exists mostly below the ground, and that part is called the mycelium: and every so often it pops up what is called a fruiting body, above the surface. This is the bit which is called a Mushroom. So all Mushrooms are also Fungi.

Not all Fungi, however, produce Mushrooms.

Fungi can be very, very big: the largest organism on earth is not a blue whale, or a gigantic tree: it's a fungus, specifically it's an Armillaria solidipes (which is a type of Honey Fungus, so this is not good news for gardeners), which is growing in Oregon, and which is estimated to be - brace yourself - 3.7 square MILES in size. Oh, and probably somewhere between 1,900 and 8,650 years old, but that's incidental to the size of the damned thing. 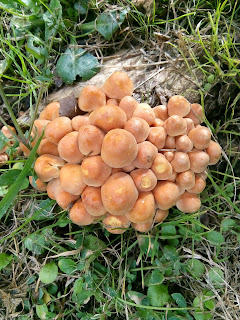 Certainly, it is accepted that the bit which appears above ground - the Mushroom - is the smallest part of the organism. It's a wee bit like taking hold of one apple, and comparing it to the size of the tree on which it grows. Fungus = big, Mushrooms = quite small, by comparison.

So when you see something like this in your garden, you are perfectly at liberty to say "Ooh, look, Mushrooms!"

Or to scream in horror and say "Aaaaargh, Honey Fungus!"

Did you enjoy this article? Did you find it useful? Would you like me to answer your own, personal, gardening question? Become a Patron - just click here - and support me! Or use the Donate button for a one-off donation. If just 10% of my visitors gave me a pound a month, I'd be able to spend a lot more time answering all the questions!!
Posted by Rachel the Gardener at 12:46