Well, that was the year that was.

APHA (part of what used to be DEFRA) started the year off well, by changing the rules about plant movements within the UK. As a response to the Ash Dieback Disease disaster, they decreed that all plants must now have passports, and if a plant is moved from one part of the country to another, then the passport must be updated and sent with it.

Sounds like a great idea: problem is, they created a system intended to deal with the relatively small number of professional nurseries and plant importers. So companies were told to register with APHA, implement certain systems for labelling etc, then they would be inspected four times a year to ensure they were complying. No big deal, really: professional nurseries already had systems in place to track plants, to label them, etc, so all they had to do was update the labelling to ensure it was APHA-compliant, and add the cost of the inspections to their normal business expenses.

APHA, however, didn't think about all the thousands, possibly millions, of people who sell relatively small numbers of plants on ebay, on the internet, via their own small websites etc. For all of us, the concept of four inspections a year was a killer: because APHA stated that the cost of inspection would be charged on a sliding scale depending on how long it took the inspector, including travel time.... it was calculated that for some of us, not living near to one of the five or six regional APHA offices, could incur a cost of well over £1000 per inspection.

Not exactly practical, for someone who only sells a few plants a year.

So, the year started with The Death Of Online Plant Sales for most of us. But never mind, APHA said it's perfectly ok to sell plants face-to-face, because they're only moving locally, not nationally, and that's what APHA wanted to stop - plants moving around the country willy nilly, spreading disease, with no way to track where they came from. That's pretty much how Ash Dieback Disease got into the UK, and how it spread around so quickly.

So we all threw away our online plant sales, and concentrated on local sales.

And then we had Covid.

So we couldn't sell face-to-face either.

Well, sort of: those who normally work in pairs - partnerships, as it were - had to consider how safe it was, and had to change some of their arrangements. All of us had to tell our Clients to stay indoors, not to come out and chat, not to offer us tea/coffee (not that I accept drinks anyway, but I know that some of my colleagues do), and - oh no! - we weren't allowed to go and use their loos! Luckily, most of mine have sheds or shrubberies, and this year, most of us have learned how to pee outdoors. (I'm ok, as a walking veteran, I have a P-style!)

It also meant that a lot of gardeners who, like me, choose to have a mix of year-round regulars and ad hoc "irregulars" and/or short-term projects, lost a lot of their ad hoc work, and were not able to take on new Clients:  it's been possible to continue working for the regulars, because I know what they want done, and they trust me to do it, and to some degree, I don't "need" to talk to them person-to-person.

But with a new Client, you need to spend time with them, discussing what they want, what they don't want, learning about them, interpreting their descriptions etc.  And this is pretty much impossible when you can't sit indoors with a sketch pad and a notebook, and you can't walk round the garden together, discussing the plants. Yes, I tried it with masks, it just doesn't work: I felt like a bank robber, and it is incredibly hard to develop a rapport with a stranger, when you can't see their faces.

And bear in mind that the majority of my Clients are senior folks, many of whom were shielding.

It almost seemed as though the plants were also having a peculiar year; 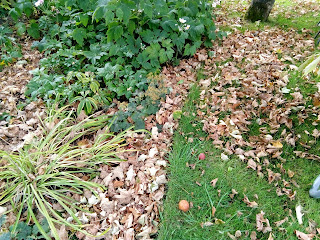 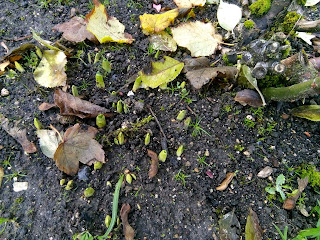 For a start, we are now getting vaccinations, which should help to get it under control. And as many of my Clients are, as mentioned, Senior folks, at last they had priority for the vaccination.

Secondly, we've all realised that we need to talk to each other more! My own group of local gardeners have had some online Zoom chats and meetings, and I have now "met" many of them, and put faces to the names, which is lovely.

Even better, we're all determined to meet up in person, once it's safe to do so!

Thirdly, we've all - gardeners and non-gardeners alike - re-learned the importance of outdoor spaces, and it's been heart-warming to see how many people have turned to their gardens for peace, for fresh air, for respite from the house, for exercise, for fresh air. Yes, I put fresh air in the list twice, it's that important!