How to: clear Virginia Creeper (or Boston Ivy) from a tile-hung wall.

This is the plant in question - 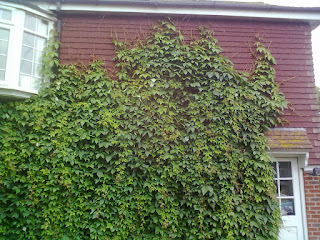 It's one of two very similar clinging, climbing perennials: the other is Boston Ivy, or Parthenocissus tricuspidata.

As you can tell by the names, they are closely related.

Both of them cling to walls and fences by the use of short forked tendrils, which end in little sucker pads. Both of them grow quickly: both of them have lovely autumn colours when the leaves turn red, yellow, orange, and various shades in-between. Both of them will gallop up the side of a house, and into the gutters, the minute you take your eye off them.

There's not a lot to choose between them, in looks or in growth habit, so how do you know which one you have? 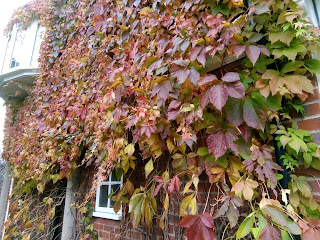 ...then there is a good chance that it's one or the other.

How to tell the difference:

Look at the leaves - what shape are they?

Are they divided into five, or seven, pointed leaflets, radiating outwards, like fingers from the palm of your hand?

That'll be P. quinquefolia, then: "quinque" being French for five, and "folia" meaning to do with the foliage.

If the leaves are more all of one piece, with three big pointed lobes, then it'll be P. tricuspidata: "tri" meaning three, obviously, and "cuspidata" comes from the word "cusped" meaning pointed, so it means something with three points.

See, Latin Is Not Your Enemy! *laughs*

So, a couple of weeks back, the autumn show was over, the leaves had mostly fallen, it was time for the annual Parthenocissus haircut.

First job: cut through all the stems at head height.

Yes, all of them! 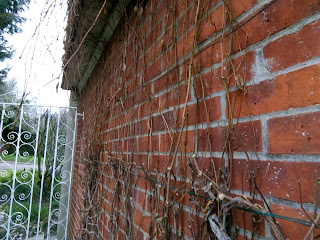 You can see how that dense covering of leaves was actually supported by relatively few, slender, stems.

So I just cut every single one, just above the support wire.

Then I started pulling down the upper growth.

This has to be done gently and carefully, because the upper storey of the  house is tile-hung, and pulling too hard might result in damage to the tiles.

So I carefully take each one in turn, and gently pull it off. 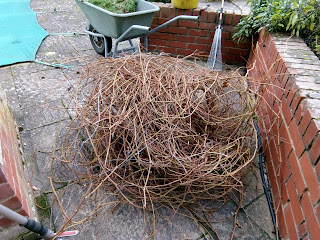 Ten minutes later, I am wallowing in tough, wiry stems, which I bundle up together and trot off to the bonfire heap, out of the way.

Then I look up at the house, to see how many I've missed. 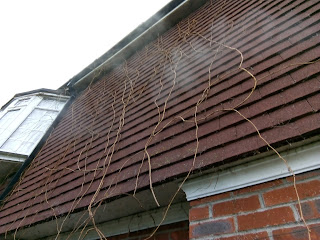 (Those white bits are not low-lying cloud, just drops of rain on the lens.)

These remainders are the ones which have snapped off, and are now too short for me to reach.

So I turn to my trusty Darlac long-handled snips, an extremely useful, lightweight tool.

It's basically a pair of secateurs on a stick, and I have two of them: one very short one, which is 1m long and which lives in my car permanently: and the super-long extending ones. 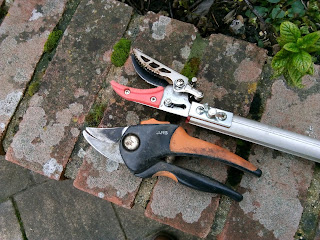 Here's the business end, with my normal secateurs for comparison.

As you can see, secateurs on a stick.

The clever part is the brown-looking grid thing on the upper segment: it means that once you have pulled the trigger to cut, it will hold onto whatever you have cut, until you release the trigger.

This takes a bit of practise. 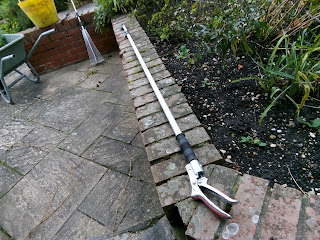 It means that I can reach up, get hold of one of those dangling stems by cutting it and then holding it: then I can gently tug it down.

And if, as often happens, it breaks again, I can just "cut" it higher up, and hold on to it again.

With a little patience, all the stems are soon removed: well, most of them, at any rate! And all with no damage to the tiles at all, and no need for the poor gardener - that's me - to go up ladders.

There you go, job done. 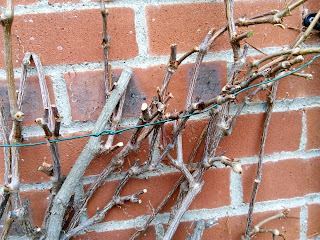 All that remains is to tidy up the lower stems a wee bit: I snip out any obviously dead ones, and aim to leave an even coverage of stems, ready to spring into life in spring.

Then I rake up all the mess, sweep the path, and trot all the rubbish off to the bonfire heap.

I do this every single year, and it grows back every year, right up into the gutters.

I hate to think how big it would get, if I didn't carry out this drastic-looking prune every year!