Weeping Pear: Cathy has a big one!

Recently, Cathy added a question to my article about Weeping Pear tree pruning, she inherited an old one, and it's getting a bit too big for the space.

She asks if it's possible to cut it right back to the thicker ‘main’ branches.

They love the tree, and they are worried that if they cut too much, it might kill the tree.

I asked Cathy for photos, and she's kindly sent me a couple. Here is the tree in summer: 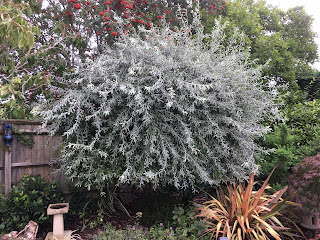 It's a lovely one, as you can see: but it is also just a bit too big for that space.

You can see where Cathy - or a former owner - has chopped off the bottom branches in a rather pudding-bowl style: not the most elegant of presentations!

I find this a lot, because it is hard to know how to prune a weeping tree - and this is precisely why I started writing this blog, to show people how to do these gardening tasks which never seem to be mentioned in gardening books. 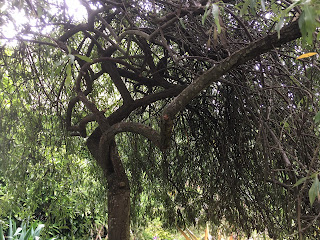 Demonstrating rare intelligence, Cathy also sent me a picture of the "inside" of the tree, which is perfect - it shows how congested it is, and it show the matrix of branches which these trees develop.

I know that Cathy wants to reduce the sideways spread of the tree, but I'm going to start by suggesting that she does some thinning out first: as per the article mentioned.

Why? Well, if you look at this photo - right - you can see that none of those branches are straight and simple: they are all congested, twirly, intertwined,  and generally knotted together.

This means that reducing a weeping Pear is not as simple as just lopping off a couple of branches.

So I would suggest firstly, get up inside the tree, stand on a step if you need to: and cut out every dead twig you can find.

If you are not sure if a twig is dead or not, circle it with your finger and thumb, and run that hand down and down and down  to the end: if you encounter foliage, then it's alive. If you don't, cut it off, as high up as you can.

Now look at the outer fringe of branches: instead of giving it a pudding bowl haircut, take each of the lowest branches in turn, and  shorten them according to the instructions in this article - it's about miniature weeping willows, but the principle is the same. Scroll down through the post to the little cartoon of how to do what I call the "undercut", which preserves the waterfall shape while thinning and shortening the branches.

Then stand back and take another look.

Without the dead material, it should be a lot thinner and lighter-looking: and with the tails properly trimmed, it should look more natural and less pudding-bowl-like.

If not, assess the tree from the front and decide where the particularly thick, dense areas are. Get an assistant to take hold of a branch in that area, then go inside the tree, and trace back that branch to where it leaves the main trunk, or where it joins a really thick branch.

The reason for doing this, is that weeping Pear branches clamber around all over each other, and if you don't start at the "outside", as it were, you might cut off a branch on the left, only to find that you now have a big hole on the right!

Once you are happy that you have tracked the branch back to the source, carefully cut it off. You might need to cut the branch in several places, in order to get it out of the matrix without damaging the rest of the tree - don't just yank it out.

Then step back and take another look, and repeat as many times as necessary.

By doing this, you will gradually reduce the tree, without ruining the overall shape, and without having any disasters along the way. Hopefully!

Once this work is done, the tree will grow more branches to fill any gaps - where you have allowed the light in, new branches will grow.

So the proper answer to Cathy's question is yes, they "could" cut it right back to the main branches, but doing so would spoil the lovely waterfall shape, and might well leave it very unbalanced: you can see from the "inside" photo that this tree has one huge old branch coming to the right, and two going to the left, so cutting right back to those big branches would leave a very odd shape.

In addition, weeping Pear are usually grafted trees, so too much pruning, ie the removal of very old, thick branches, might well prompt a spate of new shoots from below the graft point, which would be very undesirable.

I am fairly confident that even an over-large tree can be reduced quite substantially by just taking out the dead wood,  trimming off the tips, and maybe just thinning out a couple of medium-sized branches. Hopefully, it would not be necessary to cut it all back to the main branches.

So there you go, Cathy, that's your project for the weekend!

Did you enjoy this article? Did you find it useful? Would you like me to answer your own, personal, gardening question? Become a Patron - just click here - and support me! Or use the Donate button for a one-off donation. If just 10% of my visitors gave me a pound a month, I'd be able to spend a lot more time answering all the questions!!
Posted by Rachel the Gardener at 10:12