Pyracantha: how to get it covered in flowers

I have a love-hate relationship with Pyracantha, or Firethorn, as it is known: I love the look of it, but hate working with it...

.. because it is covered in lethally sharp spikes... before you ask.

I was asked recently, by a neighbour of one of my Clients, how they could get their Pyracantha to flower as much as "ours" does - I had no idea that they were seething in  envy, every time they walked past, mwah haa haaa! (*maniacal laugh*)

The answer is deceptively simple - Pyracantha is one of those few garden shrubs which respond to pruning by flowering more and more: it seems counter-intuitive, but honestly, the more you prune it, the more flowers - and therefore berries - you will have.

To get the best from a Pyracantha, then, you need to grow it in a situation where you can prune it easily, ie not tucked away at the back of a border: I love them when they are espaliered along a fence or wall, trained to wires and cut back hard.

Here's one I trained up, a few years back when I'd just started it: 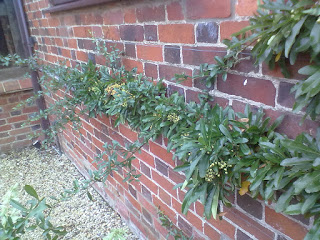 This is what they look like in May - you can see that the main branch, which is firmly tied in to stout wires on the wall, has flower buds on it, but it also has a lot of non-flowering new growth: these are the spindly bits, which are sticking out.

These all have to be pruned off, very close to the main framework: they don't bear flowers, and they just clutter up the design, and obscure the flowers on the main branches.

Plus, they make it very difficult to get close enough to prune it!

This is what most people struggle with: they want lots of flowers, so they assume they have to have lots of growth.

The trick, if you can call it that, is to be completely hard-hearted, and to go round several times a year, trimming off all the new growth. Yes, I know that you want a thick, bushy plant that is covered in flowers, but trust me, you won't get one, if you just let it grow and grow.

On the example above, I trimmed off all those skinny little new branches, back in May, again in mid summer, and again in autumn. 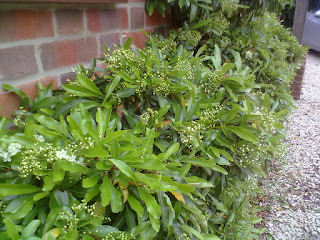 There you go, thick lush growth all covered in flowers, which will, of course, turn into brightly coloured berries later in the year.

If I'd left it unpruned, it would be a mass of spiky green shoots, and you would barely be able to see the flowers.

And, of course, the path would be half the width that it is now!

How hard can you prune them? Well, you can quite literally allow just one single branch to grow: here's one of the upright sections of this same plant: 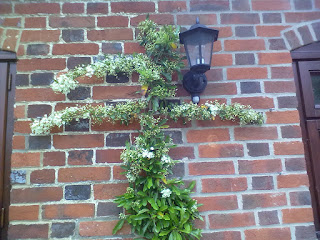 Here we are in May again, covered in flowers.

Over the next year or two, those three horizontal branches will thicken up, but I will still prune out all new growth, and I won't let them get any longer, either: you might just be able to see that this upright is between two windows, so it's important not to allow any further sideways growth, otherwise they won't be able to get the windows open. Or see out of them.

I've asked the owner to put up another couple of horizontal wires, lower down: and once they are in place, I will tie in new growth, one branch per wire, and prune off everything else, so the pattern will gradually spread all over the wall.

"Can it be that simple?" I hear you ask. Yes! It really is that simple!

Well, just prune it anyway. It works just as well with a free-standing bush: in fact, I have some photos of one, so come back in a couple of days and I'll put up a new post with pictures of it.

If you are a bit nervous about hard pruning, then it is easier to prune to a tied-in framework, because it is very clear which ones you keep. But if you just have a wild, ragged bush somewhere, go out there now and cut off every branch which does not have berries on it. You might be surprised at how much better it looks, afterwards!