Ivy Trees: topiary is not just Box and Yew, you know!

Five years ago I wrote about my Ivy Tree: a piece of topiary on a garage wall. It started as just an outgrowth of unlovely ivy, but eventually I persuaded it to become a tree, much to the amusement of passers-by. 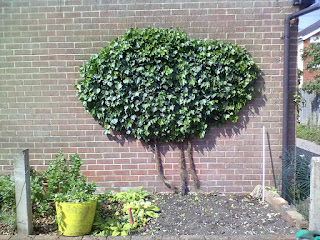 Alas, a few years later the Client decided that extra water storage was more important, and the only place we could fit the new water butts, was in front of the topiary: 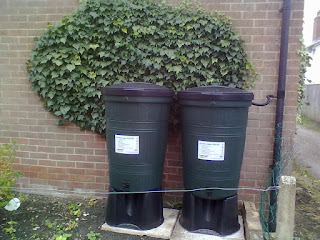 This kind of spoiled the point of the topiary (*laughs*), and it was going to be impossible to maintain it, as I would have to climb over and around the water butts to get to the wall - not very easy!

So the ivy had to go: before the butts were filled, I had to move them out of the way, rip out the ivy, dig out the root, then re-install the water butts.

Undeterred, however, I turned my attention to another wall with ivy on it.

This is what I started with: 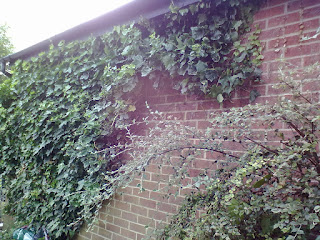 The Client asked me to stop it from getting under the gutter and creeping inside the garage, so the first job was just to cut it, a couple of feet down from the gutter, and pull off all the invaders.

This didn't take long - but it wasn't an answer, because they would quickly grow back, and I spent the next year,  doing this same job again and again.

Looking closely at the ivy, I found that originally, someone had planted a decorative, variegated ivy, but much of it had reverted back to plain old dark green: and of course in any competition between variegated (ie only part green) and fully green leaves, the branches with the fully green leaves are going to be much more vigorous, on account of having a lot more photosynthesising material than the part-white leaves of the variegated sections.

This, by the way, is why we have to keep a close eye on all variegated plants: we look out for reversion, and cut out any reverted - or "plain green" - branches as soon as we see them. 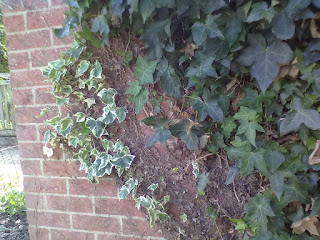 Here you can see one branch of variegated ivy on the left, among a mass of plain green.

So my first job was to cut out all the plain green stuff.

Which took me quite a while.... not least because I could only do twenty minutes at each session, as I also had the rest of the garden to look after!

Eventually, though, I'd removed all the plain, and was left with just the variegated. 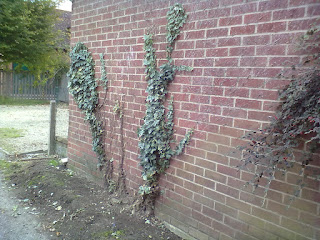 But enough... so over the next several months, I kept an eye on it to make sure that only variegated material was allowed to grow.

As it grew, I gradually cleared off the stems, which would become the "trunks" of my trees, and allowed a bunch of growth at the top of each "trunk" to develop.

Slow work, with ivy, but a year later we were at this stage: 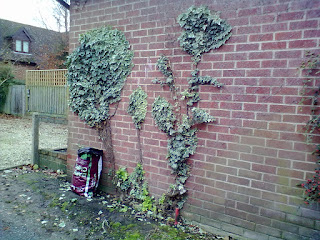 Not bad... but the left hand one is much too big, and it's all one big blob, whereas the rest of it is already suggesting a more Japanese-style cloud-pruned style of tree.

You can also see a lot of new bright green growth at the base: that's the  kind of thing that you have to be very aware of, and remove as soon as it regrows. 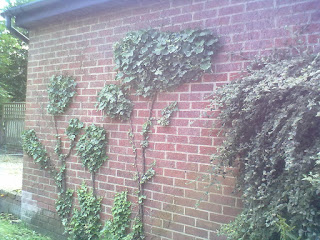 There we go, much better: I thinned out the left-hand lollipop and turned it into three separate blobs, rather than one gigantic one.

And again, note the new growth at the base - if you do this sort of topiary, you do have to keep on top of it! 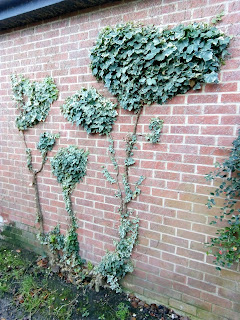 I then decided that the left-most blob didn't need the lower limb at all, so off it came.

Now we are starting to get somewhere!

Over the following few months, I kept trimming back the "trunks", gradually removing all the foliage from those sections, and only allowing growth on my "clouds" or pompoms.

Then it had a bit of a set-back: I missed it off the schedule for a couple of months, while we were doing some big projects in the garden: installing raised veg beds, moving plants around, new trees: all sorts  of interesting things.

But this meant I didn't have time to pop out and check the back of the garage. 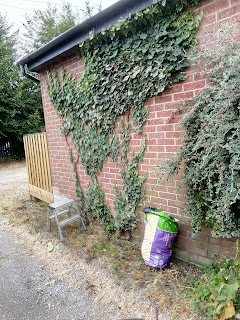 Oops! And there it was, back up to the gutter again, and trying to get inside the garage.

Time to give it a stern talking-to! 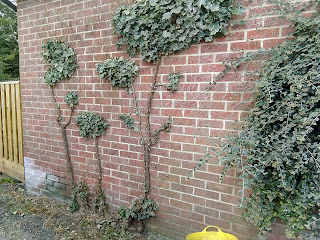 It wasn't as bad as it looked.. well, it was, but it didn't take me long to get back to where we were.

So this is pretty much the finished article.

Topiary is never quite finished: I find there is always something more to do.

A year later, I decided to finesse the left-hand blob just a little bit more, and here is the current state of play: 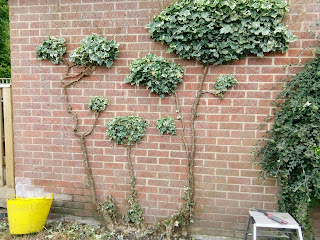 There, I think I can be proud of my copse of cloud-pruned trees, don't you?