How old is a tree? Count the growth rings, they said.

We all know this - to find out how old a tree is, you cut it down, and then count the growth rings.

Leaving aside the whole "but you've killed it now!" thing, we all know that trees grow unevenly - they grow more in spring and summer, and much less in winter.  So the wood, inside the trunk, appears to be different colours depending on how quickly it grew: paler, when growing fast, and darker, when growing slowly.

Now, I love the chance to lop bits off trees, because I enjoy a bit of heavy-duty gardening now and again, and I don't often get the chance, these days.

Why? I hear you ask? Well, because most of "my" gardens have been in my tender care for 10, 14, 18 years, so I've pretty much done all the heavy-duty stuff that needs doing.

But every so often, I get the opportunity, and I make the most of it!

Out with the pruning saw, off it came - and look at what was revealed! 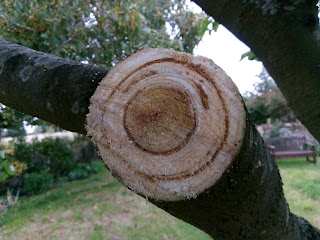 You can see that the "rings" in the cut section are not homogenous: they are not just different widths, as you would expect, but there are bands of different colours, as well.

The central core is darker than the rest of the wood - that's the heartwood, the oldest part of the branch (duh! It's in the middle - of course it's the oldest!) , but you can see, in addition, that there are two broken bands of dark colour - the piggy's eyes - and a complete ring of much darker wood, further out.

The broken bands would be from damage: it looks as though they are on the same ring, so it could be that, in that year, this branch had a couple of smaller branches broken off, or removed: or maybe the bark was damaged in two places - who knows. But it was enough to make a pair of scars on the wood.

The darker ring, towards the outside of the section, suggests that there was a particularly bad year or years at that point, where this tree grew very, very slowly. It appears to be about 5 or 6 years ago, so what was the weather doing at around 2015?

Well, the winter of 2013/14 was the wettest on record since lord knows when:  and that of 2015/16 was the second wettest.  But the previous July had set records for the hottest temperatures since 2003, so it was a period of extreme weather, which is hard for plants to cope with. And this is reflected in the band of very dark material, suggesting that the tree was struggling, that year.

Did you enjoy this article? Did you find it useful? Would you like me to answer your own, personal, gardening question? Become a Patron - just click here - and support me! Or use the Donate button for a one-off donation. If just 10% of my visitors gave me a pound a month, I'd be able to spend a lot more time answering all the questions!!
Posted by Rachel the Gardener at 11:37