How much damage will Buddleia do to a fence: and vice versa!

Earlier this year, in February, I had to cut down a rather over-large Buddleia, one which had set itself somewhat too close to the fence.
The neighbour was complaining, apparently, so the Client asked me to drastically reduce it early in the year, in the hopes that the regrowth would be a lot smaller, and wouldn't draw the ire of the neighbour.
It's a valid complaint, I have to say: really, Buddleia needs to be chopped down to about knee height every year without fail, to keep it looking neat and tidy. Otherwise it just grows bigger and bigger every year - and this one was actually a "weed" in the sense that it wasn't planted there deliberately, it had self-set. So you can understand why the neighbour had been moaning, and I therefore got out my pruning saw and started work.
Once I'd cleared off most of it, I could see the back fence: lo! and behold, there was a ducky little wooden picket fence there as well, which had been completely covered up by the exuberant buddleia.
When I got to the very back-most branches, this is what I found: 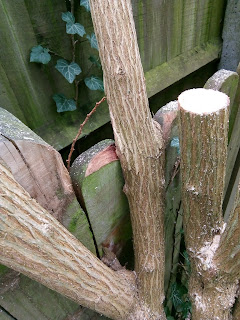 Can you see that the picket fence to the left of the upright branch is mostly greeny coloured, but there's a raw bare patch at the top?

That's where the stems have rubbed it, while flapping about in the wind.

And when I cut off that stem, much lower down, and turned it around..... 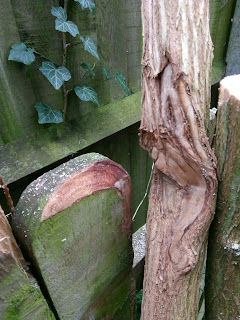 This is what I found!
The buddleia had been crushed against the fence for so long that it had formed into a ridge around the top of the fence: and it had also worn away part of the wood!

So the lesson here, boys and girls, is that shrubs and trees should never be planted this close to fences, because they damage each other.

As a gardener, I care mostly about the plants: but as a householder, I can also sympathise with the fence!!

If you have any Buddleia in your garden, keep an eye out for the many, many seedlings which they produce, and be ruthless: dig out any which spring up right at the backs of borders, because if you don't, this is what will happen.

If you catch them early enough, while they are still tiny, you can replant them elsewhere in the garden, or you can pot them up and give them away later: but it's better not to let them choose where they plant themselves, as apparently they are not very sensible!