Another misty, November-looking start to the day, but after yesterday, when by mid-morning I was regretting not wearing shorts, I decided to be brave and start the day in shorts.

My car - beautifully clean after being serviced and sort-of-valeted - told me that it was 7 degrees. And by the time I arrived at today's garden, I was having to use my windscreen wipers! Luckily it was not actual rain, just low cloud, so I thought I'd give it a go and see how the morning went.

It wasn't too bad, actually: and it's always funny to see the look of shock on people's faces when they see me back in shorts on a day when most people are adding layers and thinking about hats! Mind you, I was fully thermalled: long sleeved t-shirt, socks, gloves, and the fur-lined waterproof boots.

Which, incidentally, are no longer waterproof, they have started to crack and split just exactly where the last pair did. I begin to see why Town & Country stopped making the Charnwood boot.... it's quite clearly either a faulty design, or faulty materials. I will probably glue the cracks closed with StormSure glue, as I did with the other pair, just to make them last a bit longer, until I can get back in leather boots full time. 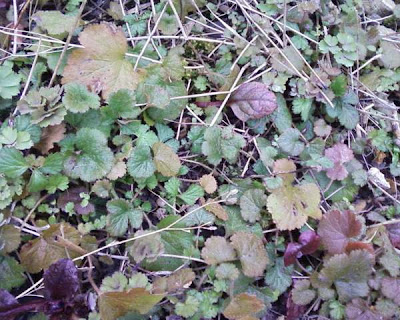 Today was mostly cutting back and weeding: here's an example of a bed which is mostly green, as you can see, but which should be mostly purple, as it is supposed to be a mat of Bugle, Ajuga Repens.

Last year this large bed was a bit neglected towards the end of the summer, and the False Geum (Geum urbanum, also known as Wood Avens) set seed, and now I am having to weed out all the little rascals before they get too big.

It's really annoying, as this bed has been practically no maintenance for at least four years: nothing could get a foothold between the mass of Bugle. But this year it's really suffering, and I wish I'd found the time to pay it some attention last year. Oh well, can't win them all. 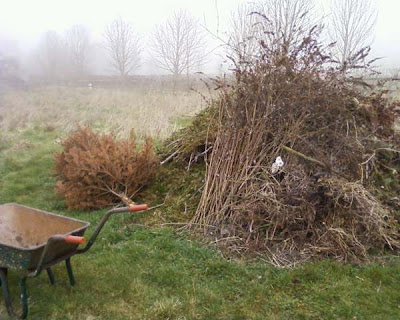 The rest of the work was cutting back the various Dogwoods, and the unlovely Hypericon or Rose of Sharon.

I know it's supposed to be pronounced "sharrUN" but I always find myself saying "SHARR'n" as in sharon-and-tracey... I also think of it as what I call a builder shrub - you know, something that builders put in to new houses, where they've specified something very tough, with minimal maintenance, that will look good until they sell the houses.

Anyway, here's where it ended, on the bonfire heap. Yes, it's taller than me. Yes, so was the last one I showed you. Is there a general theme emerging? Yes - big gardens generate a lot of waste, and require large composty bins, and a big bonfire pile!

Home for lunch, temperature having risen to 8 whole degrees, whooo! I have to say that I don't feel the cold in my legs in the same way that I do in the rest of me. I mean, I would rather be wearing shorts, long-sleeved t-shirt, a fleece and a jacket, than be wearing longs and a t-shirt. I'm odd that way.

Off to my afternoon garden, to be greeted by the client with a request that warmed my heart: "The weeping willow up by the compost heap is so low that it's making it difficult for me to mow under it." So far, so good: I am well known for my dislike of low sweeping branches that bop you on the head when you try to walk or work underneath them. Also I love chopping trees about! Then came the good bit: "Can you work your magic on it?"  How kind! That means, can I chop off enough to make it user-friendly again, but in such a way that the client's partner doesn't particularly notice that I've done it. This requires a mix of skill, experience with trees, and planning, to take out the right branches without leaving obvious "stubs". So that was the first job of the afternoon.

After that, I was back to the Circular Garden, and spent the rest of the afternoon continuing to move large shrubs: this client had their garden professionally designed and installed a couple of years ago, and it's a bit - well, how to say it kindly? The client herself calls it "municipal" and that's as good a word as any. Big blocks of 9 moth-eaten Viburnum. Big blocks of 5 thuggish Rosa rugosa. Massive block of  7 boring Broom. Another massive block of at least 8 quite nice Spirea.

So we are now moving pretty much everything, to spread the interest out among the beds.

Back-breaking work, and the soil is really, really heavy clay... but it should be worth it when we're done.

Posted by Rachel the Gardener at 18:17