Not a good day: I went out all keen at 8am, despite my car telling me that it was on 4 degrees, but it was bitterly cold.

There were jobs waiting for me on arrival: plant up the pots by the front door (nice colourful primroses) and find out why the soil keeps disappearing around a small rose in a pot on the back terrace.

Inspected the pot: it was cracked right through, with a big 'ole through which the soil was disappearing.

"That'll be your problem, then!"

Found a slightly bigger pot in the greenhouse, and transferred the rose. Perhaps it might buck it's ideas up a bit, now.

After that, and some light-weight edging with my new edgers - from Fiskar, bought last week when I took out my Old Faithful edgers for the first time this year, and they wouldn't cut a thing! Just bent the grass,  how annoying. Actually I'm fibbing, I did try to use them the previous week, and thought they needed tightening. Usually with long-handled edgers that don't work well, I find that it's less a question of sharpening them, and more a question of  tightening them. 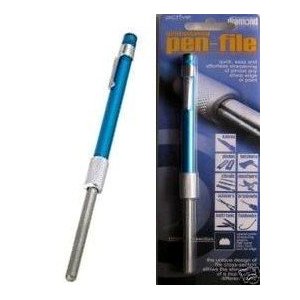 So I'd tightened them: but they still would only bend the grass. So I ran my pocket sharpener across them, have you seen this tool? (left)  It's a great invention, as the rough file part lives inside the pen part when you don't need it, so it doesn't get worn out and dirty from being carted around in my work bag.

So handy for perking up the secateurs at short notice.

Anyway, I "zizzed" the shears' blades, but frankly they were so worn that it wasn't clear which is the cutting edge and which is supposed to be the straight edge: hmm, time for a new pair, I thought.

£26 and a quick trip to Focus later, I have my posh new Fiskar edgers, but I have to say I'm not impressed with them so far.  OK, they cut well enough - well, I should darn well think so, they are brand new - but they don't have the same solid feel as the old ones.

I'll be honest here, I give a lot of abuse to my tools: well, I'm paid by the hour, so every minute counts, and I don't treat my tools as precious items, I treat them as things that get the job done as quickly as possible.  So my edgers often get used for chopping back a slightly overgrown edge, and by the nature of the job, I do occasionally (accidentally) chop stones etc with them. So I don't expect too much from them, really, but the last pair - Old Faithful - have been with me for, oooh, about four or five years.

So, these new edgers feel a bit flimsy, I don't think they are going to be much good at emergency re-shaping of edges...

Anyway, two and half hours of that was enough, I was chilled right through, so I went home and cancelled my afternoon job.

Annoyingly, the sun came out for a while in the afternoon, making me suffer guilt pangs for wasting a nice day indoors, but I was still cold, so I just put the kettle on again....I was hoping to use the free time to meet Frances, who might be a new mentoree (or might just want to ask a few questions!) but she was waiting in for the plumber.
Posted by Rachel the Gardener at 14:36