The importance of clearing the verges

Lucky me, being self-employed I can choose whether to go out to work or not... of course, no work = no pay, but I'm happy with that responsibility.

This morning, again, we had bright sun but sharp frost, so I put off my morning job until the afternoon, knowing that it involved some planting: yes! Some of the leftover plants from one client are going to another client! I love it when this happens.

My Tuesday lady wanted to add some snowdrops to the grass verge at the top of her property: she is very generous with opening the views of her garden to the public passing by, as her garden contains a lake which is at a much lower level than the road.

Most years I get an instruction at some point to chop down the tallest shrubs and trees that edge the road, to clear the view. I'm expecting it any time now... but for today, it's planting of snowdrops "in the green" which is the only way to do it, and clearing back the road edge where the shrubs overgrow the lane. 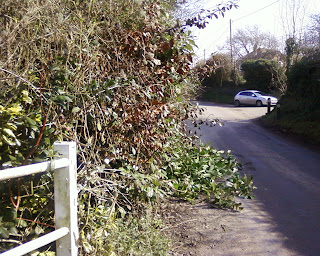 Here it is shortly after I began: the shrubs are a nice mix of some evergreen common laurel, and some mahonia, along with Forsythia - flowering now, such a shame to have to cut it - Buddleia, and Philadelphus.

It's a narrow lane in the first place, the ground is banked highly up on the right, as  you can just about see: the house up on the right is a good 10' higher than the lane!

My instructions were to cut back the road edge - a request from other villagers, apparently! - such that the 30mph sign could be seen.

What 30mph sign?  I couldn't find one, and couldn't remember seeing one.... there's a telegraph pole, hidden in amongst all the stuff, but no road signs....

Shrugging shoulders, I set to work and hacked back the over growth. 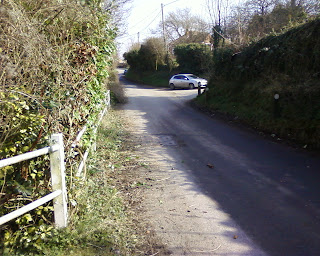 I'm actually standing in the layby to take this photo, and of course that's where I planted out the snowdrops. But I forgot to take a picture of them, so you'll have to imagine it.

When I'd got to this stage - four wheelbarrows full of cuttings later - I was able to look down over that white fence, and would you believe I found the 30mph sign, it was lying in the garden about 20' down the bank!

It was quite a scramble to get it, but I did, and then I found that the telegraph pole had a holder on it! So I climbed up on the fence and replaced the sign.

Then I stood back to look at it - and couldn't see it for the laurel...... so I had to chop another section down, this time in height rather than in depth. I couldn't quite get it fully visible, but it's clear that we have tried. I say that, because we got in trouble a couple of years ago: a letter from the police arrived, instructing us to cut back the shrubs further up, near the drive, as they were causing a hazard to drivers, and if we didn't do it within 10 days, the council would do it and we would get the bill.

Needless to say, we rushed to obey, and have made big efforts to keep that part clear ever since.

Hopefully in this case, as we've obviously done our best to clear the signs, we won't get any more complaints. 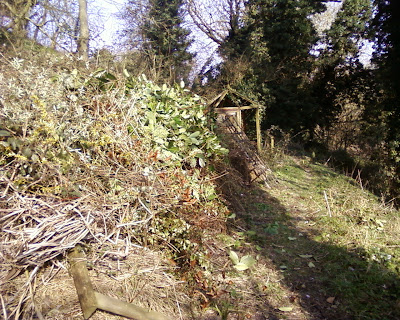 That generated another two barrow-loads of waste, which I trundled up to the bonfire heap.

As you can see, it's getting quite big now.

I left a note for the client, saying "time to burn the bonfire again!"

And yes, that is a summerhouse in the distance, and yes, our heap is taller than the roof of the summerhouse.

I imagine it's quite exciting when it's lit - usually I turn up one week to be greeted by proud smiling faces and "we did the bonfire!". When I go up there to have a look, I find a huge black area, with scorched branches all around and above it, and a big pile of ash. This always pleases me, as I use the ash to fill in the various sets of steps in the garden: bonfire ash is brilliant for that, as it's sterile (no weed seeds) and being dry, it doesn't go mushy and muddy the way ordinary earth does.
Posted by Rachel the Gardener at 17:58