Thurs: Today I have been mostly digging...

Amazingly, it was even colder today than yesterday: my car said just 1 degree when I went out! But it didn't feel too bad once I got going, unlike yesterday.

Once again I was all thermalled up, and today's main job was digging out clumps of plants, and I always find digging a very warming occupation.

My client is removing a large bed of mostly herbaceous perennials, although we refer to it as the Left Hand Shrubbery, as distinct from the Right Hand Shrubbery which is on the other side of the huge Irish Yew.

Instead of the current, time-consuming bed, we're going to have a paved sitting area, reducing the bed to a much narrower border containing - probably - hydrangeas.

The bed is time-consuming because the mix of plants still isn't quite right, despite constant moving and replacing of plants.  It's not a problem bed as such: it's a big garden with plenty of sun, but the bed backs onto the neighbours' fence (I work there, as well) and thence to the road, which is busy and noisy. It's also the wind tunnel through the village, so whatever goes in that bed needs to be tall if it's to act as a screen,  and needs to be strong, otherwise it gets blown over.

When I started working there, which must be, ooh, six years ago, there were a couple of very large Mahonias doing duty as wind-breaks, along with two small Irish Yews. 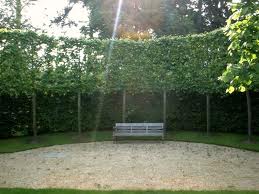 Two years ago, my client installed a high-level espaliered hedge to act as both a windbreak above the fence, and as a visual and acoustical barrier against the road noise. This pic - right - is not of the client's hedge, it's just to illustrate what I mean by a Hedge on Stilts, that being the technical term for what we have.

Oddly enough, while looking for an illustration, I discovered that this sort of hedge is now called Pleached. I say "odd" because when I was growing up, pleaching was what they did to the hedges between the fields, and involved hacking them down murderously at ankle height, then bending the stems over to nearly right angles. It looked like butchery, but by early summer there was a thick, leafy, hedge, that was stock-proof at lower levels. Instead of a wild tangled mess. This was done every couple of years, as I remember.

Anyway, Pleached Hedges is what they're called, and we have one. This lead to me being instructed to remove all but one of the Mahonias, hooray! hooray!

Note for non-gardening people (although why are you reading this, I wonder?) professional gardeners all hate the following plants: Mahonia, all types. Berberis, all types. Climbing/rambling roses, all types, except Zephirine Drouhin which has no thorns... are you seeing a pattern emerging here? Yes, we hate being scratched to depth while going about our chosen occupation, even if we are getting paid for it.

Where was I? Oh yes, the Mahonias bit the dust - or more accurately, the bonfire heap - and we started filling the bed with lovely high-growing perennials. The reduction in wind allowed us to go for height without excessive staking, and we had some cracking Aconitum carmichaelii, which are late flowering aconites, in a really fabulous blue colour. Picture, left.

We also had a lot of  Eupatorium purpurea 'Reisenschirm',  which is fast becoming one of my favourite "big" plants: the name, in German, means "huge umbrella" apparently (or so my married-to-a-German client told me) and it's very appropriate.

Both of these two were well over my head in height last year, and gave a fabulous display from late summer right through to the end of autumn. 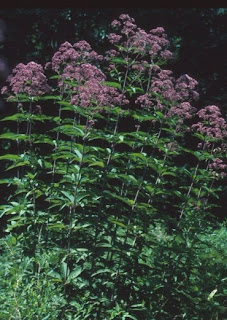 So they've been successful - by the way, here's a pic of the Eupatorium in case you're not too familiar with it, but I have to say, I'm sure that ours were much more purple than these ones. The stems are dark glossy purple (the leaves are green) as well as the flowers, and it makes a fantastic plant for the back of a border.

We also have them growing behind a low box hedge, it's about 3' tall I suppose, so the Eupatorium loom over it.

So these two have been great, but somehow all the other plants have needed shuffling and moving around. We had lots of asters, some Miscanthus, a statue, any number of Campanula,  Crocosmia, some dwarf Solidago - and I have to say, why does anyone plant the monstrous GoldenRod when there is a tidier, neater, dwarf version? -  Iris Dot (named after the lady who gave my client the original clump) plus a fringe of geranium: tons of lovely plants, but the overall look has never been quite right. I would say that twice a month, the phrase Left Hand Shrubbery crops up on my joblist.

So, my client has quite rightly decided that it's time for a change. She called in a local Garden Designer, Mary Ann Le May, who has radically restyled the shape of the bed, and who is bringing in her contractor next Monday to clear out everything that we haven't already lifted, dig it over, get it level, and either turf or bark it, can't remember which. With luck and decent weather, I'll be there as well, to help, and to rescue any late finds. I've worked for Many Ann before, she's really nice, so I'm looking forward to seeing her again.

So, to return to my opening paragraph, I have been mostly digging: I've been lifting all the labelled plants and putting them into bags to be rehomed

You may be raising eyebrows slightly at the idea of putting plants into bags, but we have elevated this into an art: I make sure to scoop up some extra earth with each clump, and I tie the tops of the bags partly over the plants, to retain water. They live quite happily in bags for weeks at a time!

We are selling all the unwanted plants for a pound a clump or so, depending on size, with the money going to the October Club, which is a local Alzheimer's charity. My client generally opens the garden once or twice a year, and October Club is always one of the beneficiaries.  I sent round an email to half a dozen of my other clients just before I started this entry, and I've already had one response with a list of what they want. Excellent!

Right, I've warmed up enough to think about going outside in my own garden - it's time I started updating my "for sale" list, ready for the start of this season proper. All the pots are starting to sprout, so I have to decide what I'm going to sell, and at what price: and I have to remove from the list anything that has sold out. I don't have much room for stock plants, so I tend to take a batch of cuttings or seeds, then sell them all, then start again. My dream is to have enough room to be able to keep the same plants going year after year. At present I have to be very ruthless with what I have, and only keep plants that I know are going to flower - sadly, I am finding the truth in the saying "people only buy what's in flower, while it's actually flowering". It's very rare to find customers who know what they want, and will buy it even out of season.

So at present, I have a sort of rolling stock, and last year's tiny plants are going to be ready to make their way in the big bad world this year.
Posted by Rachel the Gardener at 16:04