Thurs: Are we back to November already?

Woke up this morning to 4 degrees and thick fog! But by 9am the sun had broken through, and just to prove it, here is the promised picture of what used to be the Left Hand Shrubbery: 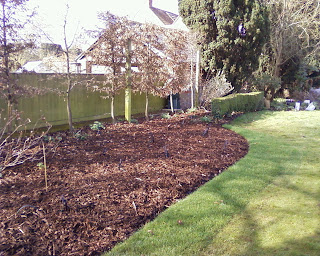 As you can see, the shrubs are all gone, the herbaceous perennials are all gone - although I am harbouring dire suspicions that certain Euphorbias are going to be haunting me all year - and it's now covered with bark which, as I found out last week, you can smell even from next door's garden.

The plan is to have a paved area and a bench for sitting on, and to move some of the hydrangeas along the back.

But this might change, so we'll see. At present, both my client and I are enjoying the clear, uncluttered look of it, but we might change our minds later! 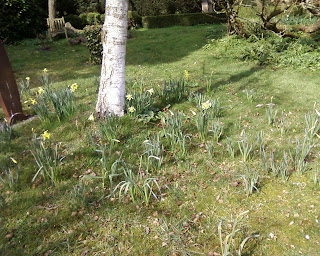 This section of the garden is always a thrill for me, see those daffs?  I planted every single one of them, over the last 2-3 years.

My client would approach me with a paper bag behind her back, and an apologetic expression, and the opening "I know you hate planting bulbs, but:"

This always makes me laugh! Of course I hate planting bulbs, but as I am paid to do what the client wants, then of course I will plant them!

It's a running joke that every professional gardener I have known hates a) raking leaves in autumn and b) planting bulbs.  I suppose for the same reason: it's a lot of work, with nothing to show for it until months or years later.... 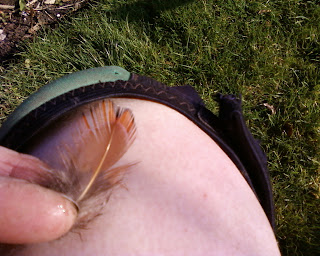 Then, further round the garden, I found evidence that Sabrina The Hunter Cat has been doing her thing again, in a small sad pile of feathers.

Considering that this cat is a) tiny and b) wears a collar with a bell, she is an amazingly successful hunter. When she was barely out of kittenhood she caught a rabbit that was very nearly bigger than her, and dragged it all round the garden ("Lookit! Lookit! I gottit!") with clearly no idea how to finish it off.

Guess who got the job of giving what was left of it mercy? Yup, that would be me. 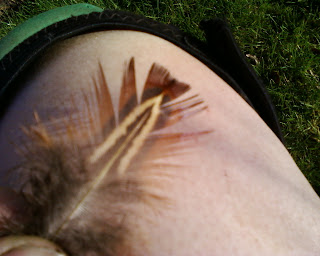 Anyway, whose feathers are these, do we think?

The orangey-russetty colour made me think it would be from a robin ("Bad cat! Bad cat!") but then, looking at this one, there's a bit too much pattern on it, isn't there? Also, the very tips are dark, and generally it is only the very tips that we see on the outside of the bird.

After lunch, it was a spot of mowing: one of my ad hoc clients is away for a month, and asked me to have the grass cut and tidied ready for when she returned, so I spent two hours putting nice stripes into the lawn, and clipping the edges. I don't get to cut grass very often these days (there are cheaper people out there to do that!) but I'm always happy to oblige.

And it does look so lovely when it's freshly done. This was the first cut of the year, so it was very long and rather damp, which makes it slow going, as I have to keep unclogging the blades, and emptying the collector. It's a complicated lawn, with one big open area and a lot of paths through beds etc. A couple of years ago I used to cut it regularly, when my client was too busy to do it, and I developed a routine for going over all of it once, and not repeating any bits. But it's been so long since I did it regularly that I'd forgotten the route!

After that it was a quick trip home to pick up some tools and off to "my" Yard (not quite mine yet, but soon) to fix the water tank. Remember the water tank? Jim and I moved it into place, then found an 'ole in it, which I patched. Then on Tuesday I discovered - it having rained a little - that it wasn't holding water as it had two additional 'oles in it, so I'd left it on it's side to dry out.

Today I patched up all the newly discovered holes, and set it up on it's blocks again.There's no rain forecast for tonight, so there should be plenty of time for it to dry out. 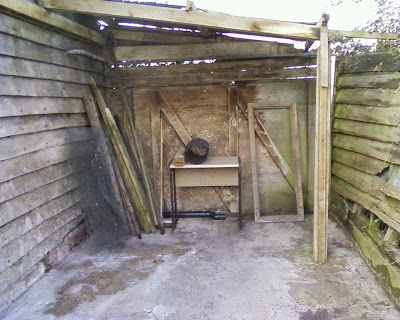 Here's the new and improved lean-to: much reduced, much, much safer - not that I plan to use it much, especially on windy days! - and all nicely swept out.

So far it's proving useful as a small storage area for odd bits of wood that will be made into benches at some point.

And there's a small old office table that I found thrown out, which might well be useful for potting up on. 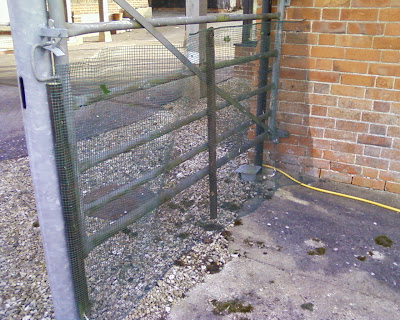 I also spent a little time continuing with the job of wiring up the gates: I had a lucky find of some green plastic mesh, just the thing for keeping the bunnies out and so much classier than horrible old chickenwire.

Here is the right-hand half of my main gateway, with the mesh attached. From more than about ten feet away, it's completely invisible, which is great.

I have another piece of the mesh, which hopefully will be big enough for the left-hand section of the gate, that's the one that I open to drive in and out. If that is the case, I should then be bunny-proof,  and will be able to start moving plants in as soon as I get the agreement signed. 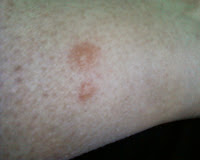 Finally for today, ultimate annoyance: one week back in shorts and already I have two lovely insect bites on the back of my left ankle.

Who would have thought I would need insect repellent, in March??

Posted by Rachel the Gardener at 17:38