Well, it's not my favourite, but it's very popular: it's a species of Hazel, Corylus, but with twisted leaves and branches, hence the name. 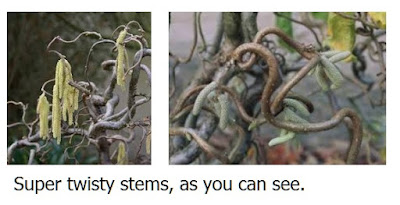 And when I say "twisted", I do mean twisted!

The other common name is Corkscrew Hazel, and you can see why it got this name.


The branches grow in a strange, lumpy, looping fashion, leading to spectacular gnarled old branches and a wonderful silhouette in winter. 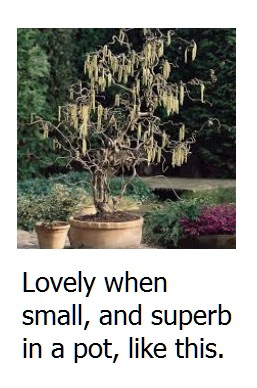 When they are small, they are adorable, and here's a photo of a typical small one, in a pot, making a statement and giving some style to someone's garden.

Planting them in a pot keeps them small, and manageable: in fact, did you know that "Bonsai"  does not mean "pruned to look like a miniature of the full-size thing" it actually means "grown in a pot" so all of us with anything in pots, grow Bonsai plants!

But if they outgrow the pot and you plant them in the garden, they will - slowly - grow into a proper tree-sized tree: 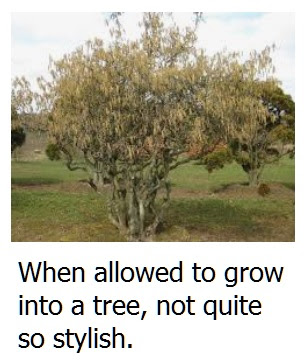 And here's a fairly typical example of a "full-sized" contorted Hazel, and as you can see, it's not quite as stylish as when it was small.

So why do I say that this is not my favourite small tree?

Ans, because the leaves are also contorted, and I always think that they look limp and diseased.

There's another reason why I prefer the willow, and that's because Corkscrew Hazel is extremely difficult to propagate, so most of the ones you find for sale (and in peoples' gardens) are grafted.

And this leads on to the subject of this article, pruning them.

The main part of the tree doesn't "need" any pruning at all, unless it outgrows the space, or unless a branch is accidentally damaged.

But all grafted plants - trees, roses, anything - have an annoying tendency to throw up shoots or suckers from below the graft union, ie not from the "pretty" part which we paid a lot of money for, but from the "unpretty but vigorous" rootstock.

In the case of contorted Hazel, the upper part is wonderfully contorted, but the rootstock will be plain old normal Hazel, dead straight and super-vigorous.

So it's vital to keep checking them, and removing any of these dead straight shoots as soon as they appear.  If you don't, you end up with a curly tree, half of which is straight: and as the straight wood is more vigorous, in a couple of years it will take over, choking out the contorted stems, and ruining the whole thing.

So, last week I was asked to sort one out, and the garden owner kindly said I could take photos throughout the process. 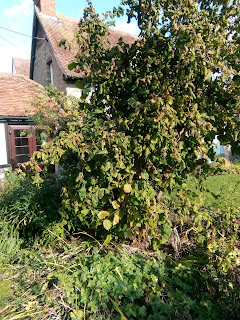 Here we are at the beginning: quite a large Contorted Hazel, and it doesn't look particularly bad, just a bit unbalanced, and a bit congested lower down. 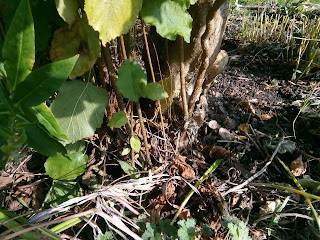 Here at the base, you can see a whole mass of straight, upright shoots.

These are the ones from the rootstock, they are not curly, nor will they ever become curly.

So I go in on hands and knees, armed with a pruning saw, and cut out those stems as low to the ground as I can.

In a perfect world, the owner (or their regular gardener) would have checked this plant every couple of weeks, and would have rubbed out any buds or shoots from this low down on the plant. Still, it's not quite a perfect world, and at least it keeps me in work! 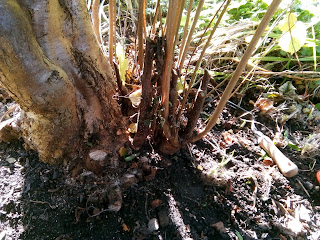 Here we are, half done: you can see that to the left, the trunk is clear, whereas to the right, it is closely surrounded by a mass of straight, upright shoots.

It's tricky to do this without damaging the main trunk, not to mention having to be scrumpled up under the tree, trying not to trample on the surrounding plants, and being stabbed by other branches while trying to concentrate.

Heyho!  The life of a Gardener! 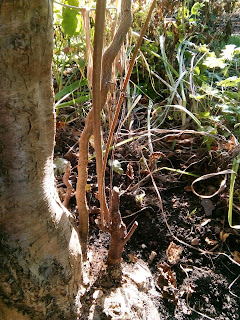 Here's something else to look out for: as I worked my way around the trunk, I found one new stem which was not from the rootstock, but was a genuine curly one.

Can you see the one I mean? It starts close to the trunk and moves diagonally outward, behind the straight one.

These curly stems can be left uncut, as they are replacement branches - unless they spoil the look of the trunk.  In this case I left the curly stem until the very end, then decided it was out of proportion to everything else, so I went back in and cut it off. 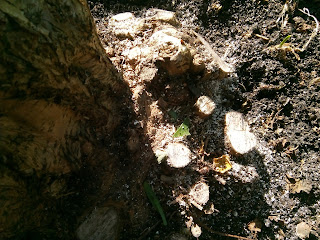 Here's a shot of the mass of cut stems: this tree has clearly been a bit neglected for several years, which is why there are so many of them.

Additionally, I can see that earlier gardeners have merely chopped off the well-grown straight stems, having not spotted them when they were tiny.

Unfortunately, cutting biggish stems just leads to the cut stems re-growing. This is what will happen with these ones, but hopefully now the garden owner knows that they should check around the base of the tree maybe once a month, and should rub off any and all new growth from any of these cuts. That will prevent them re-growing. 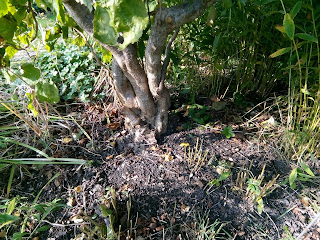 Here's the finished article: all those untidy jangly straight stems are gone, and now we can see the main curly trunk it all its beauty. 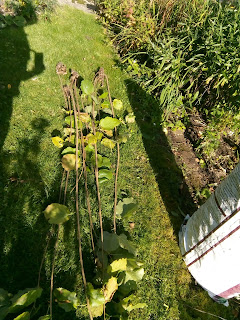 These are some of the bits which I removed - this shows how long and vigorous the shoots were!

All this straight growth (taller than me!) was hidden among the curly foliage throughout the summer, and thereby lies the danger - it's hard to see, so the owner tends not to realise that there is a problem.

Until it's too late..... ha ha, it's never too late, you can always retrieve them. 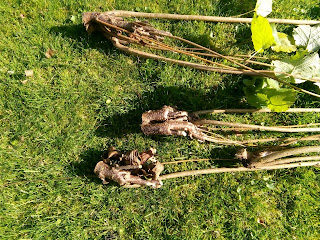 And here's a closer look at the ends - you can see how I have made just one cut, but each one which I cut has several stems sprouting out from it.

This is the sign that previous gardeners have left it too late to rub off new growth, and have had to saw it off.

It also shows that I am far more diligent than any of them, as I have managed to cut the stems much lower to the ground, which leaves a more pleasing appearance, rather than having a ring of sticky-up chopped-off sprouts around the base of the tree. *smug mode engaged* 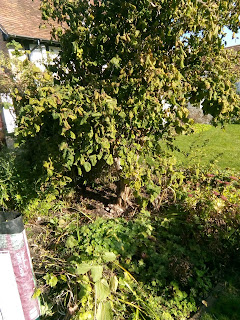 And here's the final thing, all the unwanted straight growth has been carefully removed, and maybe just one or two of the upper, curly, branches have been tidied up, to make a better shape, or to enhance the appearance.

So there you have it - how to keep a Contorted or Corkscrew Hazel safely under control: check it regularly for new growth from the base, and either rub the new buds off, pull off the shoots if they are small enough, or if not, cut them off as low to the ground as you can.


Did you enjoy this article? Did you find it useful? Would you like me to answer your own, personal, gardening question? Become a Patron - just click here - and support me! Or use the Donate button for a one-off donation. If just 10% of my visitors gave me a pound a month, I'd be able to spend a lot more time answering all the questions!!
Posted by Rachel the Gardener at 08:54