How to Plant Bulbs - the easy way.

Now, ask any of my various Trainees, or students for that matter, and they will all tell you that I pour scorn upon most garden gadgets.

There is a lot to be said for using "right tool, right job", but against that you have to balance having to carry around a car stuffed full of tools, most of which are only used once in a blue moon.  So, rather than having a gadget for every job, I prefer to use the minimum number of tools, with as many as possible of them being multi-functional (just use the "search" facility at the top to see my views on the dear old Daisy Grubber!).

When it comes to gadgets, one of my least favourite is the bulb planter.

You know the thing: 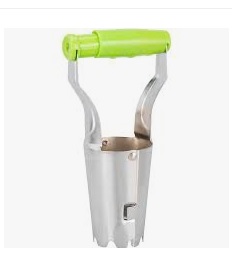 "Make bulb planting more enjoyable! This product easily removes and ejects soil, allowing you to plant bulbs with ease. It has a comfortable grip, depth gauge and easy release handle."

The idea is to push it into the soil, pull out a plug of soil, pop in the bulb, then pop back the plug of soil.

Firstly, this only works if your soil is as soft as sponge pudding mix. (Don't look at me like that: I spent 14 years working for a lady whose soil had been so well mulched every year that it was JUST like sponge pudding mix - and chocolate sponge at that. Wonderful.  *sigh*)

Secondly, it only works if there is no grass growing on top of it - or, to be accurate, if there is any grass, it has to have been cut super-short, otherwise the bottom end of the planter simply can't cut through the grass.

Thirdly, if the gadget does actually manage to cut through the grass and sink into the soil, the soil then needs to be sufficiently "claggy" to stay together in a plug, and not just tumble out in loose blobs all over the grass, your feet, the pack of bulbs etc.

Fourthly, if you've managed to achieve all that, you then have to get the plug of soil out of the gadget in order to replace it in the hole. Allegedly you "just" squeeze the sides of the handle and out it pops. Yeah, right. In my experience, soil which is "claggy" enough to stay in a plug, is therefore "sticky" enough to stay lodged inside the gadget, and has to be poked out with a stick or a Daisy Grubber, whereupon it would normally fall apart and be useless for plugging the hole.

And finally, this means you can only usually plant one bulb at a time.

(I am tempted to add that, just as you get the hang of using the wretched thing, it breaks, but that might be considered unnecessarily pessimistic.)

So how do I do it?  I take my small border spade, and use it thus: 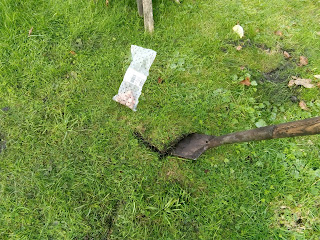 Dig one vertical slit, then another one at right angles.

Lean the spade back from the vertical - that's what I'm doing here -  and push it under/across.

Rather as though you were lifting a particularly generous "turf". 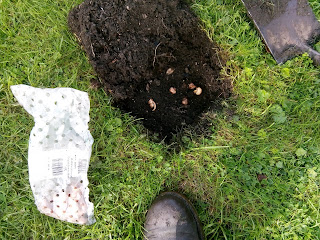 2) Peel back the flap: don't cut it off, just fold it back.  It doesn't matter if the flap partially tears - just flap it out of the way.

If you are planting bigger bulbs and think the hole isn't deep enough, wiggle the spade blade around in the base of the hole to make it deeper.

3) Then sling in the bulbs. Here you can see I'm doing crocus, which are small, so I toss in a handful.

No, I don't set them carefully the right way up, I just toss them in. With bigger ones, I do normally try to get them right side up, unless there are hundreds and hundreds of them....  in which case they get shoved into the hole willy-nilly, a small handful at a time, and are left to make their own way up to the light.

Don't worry, they all make it. Ask any professional gardener, and they will tell you tales of finding bulbs which had been planted on their sides - or even completely upside down! - but whose shoots had found their way to the top, and were flowering regardless. 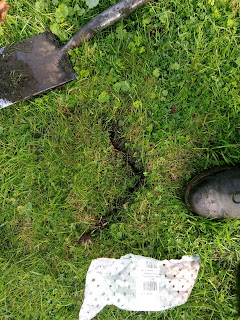 4)  Fold the flap back to cover them, press down well with the foot.

I tend to stomp quite heavily, this helps to prevent squirrels and other rodents from digging up the bulbs and eating them. 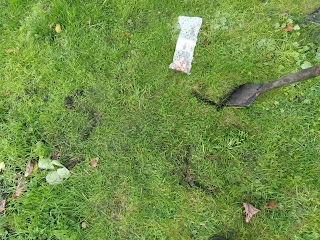 5) Move a short distance away, and repeat.


That's it. Quick, simple, easy, not as backbreaking as doing them individually, works equally well on big bulbs such as species Daffs, and on tiny ones such as Crocus.


I find that this technique leaves a series of "pointy brackets" on the lawn, which are easy to see while you are doing it - this makes it easier when planting out the rest of the bulbs, as you can see where you've been.

But after a couple of days, the slits disappear completely.

I always use this technique for small bulbs, as they are ludicrously tedious to plant individually - plus it produces natural-looking clumps, rather than individual soldiers on display.

And I also use it for larger bulbs, again, to get a more natural grouping effect, with three or more bulbs in each pointy-bracket patch.

It works particularly well if you have a fellow gardener, or an interested Garden Owner, on hand, so that one of you does the spade work, the other pops the bulbs in place, as that saves having to keep letting go of the spade, then picking it up again. I'm all in favour of efficiency!

If I have only a few to plant, I used the same technique but with my hand-trowel: make a vertical slit, make another slit at a right angle, lever up the flap, push in the bulb, press down well.

All of which is a great deal easier and simpler than faffing about with the gadget!

Posted by Rachel the Gardener at 17:35