Paw prints in the brickwork - again!

Back in April 2015 I wrote about a brick I'd seen which had a pawprint in it. 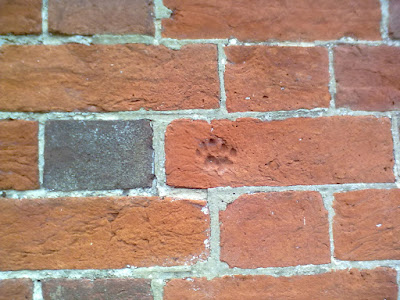 Here it is, in case you can't be bothered to follow the link - two overlapping pawprints, probably from a cat or something with retractable claws, ie not a dog.

Well, today I received an email all the way from Minnesota  *waves vigorously in order to be seen that far* from Greg and Julie.

They have a house which was built in 1868 which, as they say, is  "old for this part of the country".

Not so much for us here in England, but for America, yes, that's pretty darned old!

They were doing some building work and found this; 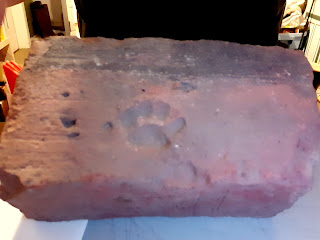 How's that for a lovely old hand-made brick?

And how's that for a nice fat paw-print?

Again, it would appear to be something with retractable claws, so if I were shown this photo I would probably say "cat" but there may well be (or have been) other sorts of critters out there at that time,  with which I am not familiar.

Unless the person in the UK who made the "fake paw onna stick" for imprinting bricks also exported one to America...  *laughs*

If anyone else has photos of pawprints in bricks, do please send them in!

Posted by Rachel the Gardener at 07:36