How to: start a Cloud pruned Juniper from scratch

Warning - this article is not for the faint-hearted....*laughs*

Have you ever admired those complicated cloud-pruned conifers? You know the sort of thing...

They cost a lot of money (the above one is 2'/60cm high) because they take a long, long time to train and prune. 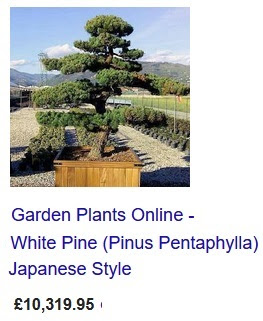 Both of these are Bonsai, which means "grown in a pot".

What's that?  Are you raising your eyebrows at me, and saying "Actually, 'bonsai' means little tiny trees carefully trimmed to look like big trees, but in miniature. That's what 'bonsai' means."

There is another word for "young trees carefully trained and trimmed to look like really, really ancient trees" and this word is niwaki. It can mean just "a tree which is growing in a garden, as opposed to a tree growing in the wild", but it can also mean something like "the essence of a tree", so a tree which has been trained and pruned in the niwaki style means that someone has dedicated several years, into the training and pruning, the "sculpting", if you like, of the tree.

I love topiary, as all my Clients/Trainees/Students,  past and present, know. (In fact, one local gardener once said that she always knew, when she went to a "new" garden, if I'd ever worked there, as there would be some piece of slightly unusual topiary... I suppose that's fame?)

And I love the niwaki style, although I rarely have the luxury of dedicating four or five years to one single specimen.

I've always wanted to have a go at creating one of  these cloud-layer trees, the ones with pads of foliage on long bare branches, and I got a chance, back in 2016.

This is how it happened... in one of my gardens, I found a rather nondescript, nothing-in-particular Juniper (type of Conifer) growing in a rockery. 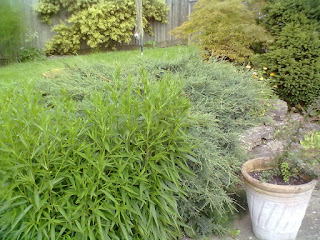 As you can see - left -  it had been somewhat swamped by the neighbouring Asters growing up through it.

(The Juniper is the greyish-green bit...)

So the first job was to dig out some of the Asters, to give it breathing space. 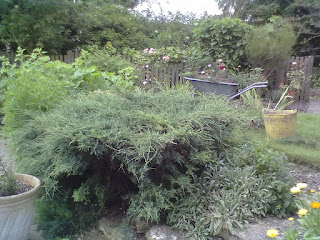 This left me with this - right - a rather ugly, scruffy, conifer with no style, no "form", no nothing really.

The only thing you could say about it, is that it's green all year round.

So I decided to give it a radical prune. The Client didn't care what I did to it, so I thought aha! Perfect! I'll have a go at niwaki, see if I can convert it to a cloud pruned form, and if it all goes horribly wrong, I'll dig it out and throw it away. 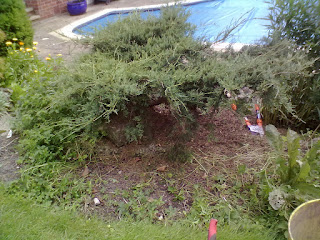 So I started removing branches.

This is the back view (yes! They have a pool!), and I worked my way in at ground level, removing all the stems which were growing horizontally, because they were too close to the ground. 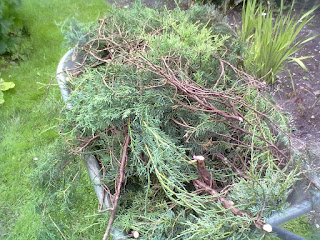 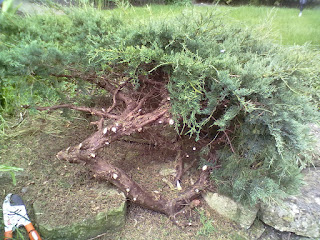 At the front again, now I am starting to see the shape of the branches.

There are some fabulous ones, shooting off at all sorts of odd angles.

I particularly love that right-angle on the left! 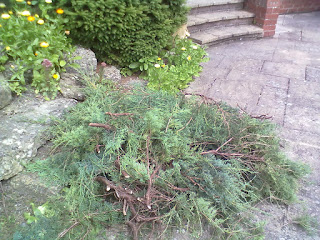 Another couple of barrow-loads of branches later, it was done.... 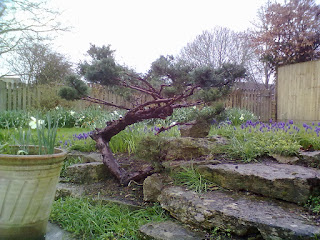 Weird bare stems, at odd angles, with "pads" of foliage on the tips. 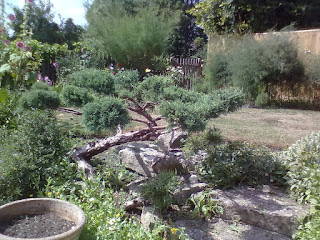 Here we are two years later, in August.

As you can see, the foliage is growing back nicely, and is making quite shapely, thick, pads.

All I did was continue to clip back the pads as they grew. Quite easy, really! 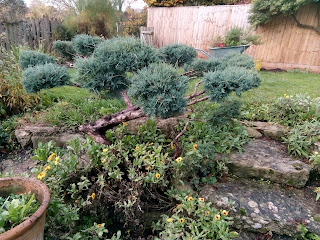 The pads are all thickening up nicely, and in fact I'm now looking at it and thinking that I could remove a couple of them.

When I first did it, I was a wee bit cowardy-custardy when it came to removing branches, and I didn't quite take enough off.

Next spring, I'll go over it again and remove a couple of the more congested ones. 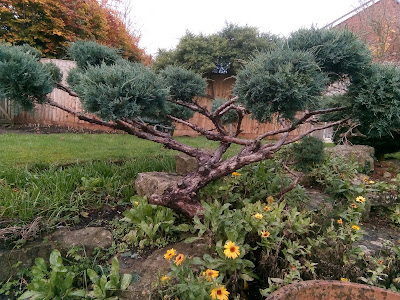 Here's the view from underneath, as it were.

You can still see that original interesting angle of the main stem, and you can see how the branches are fairly close to horizontal.

Not quite as horizontal as they would be if I were training a tree in my own garden, as I would be using guy ropes, canes and weights to pull them down to absolutely horizontal.

But considering this is in someone else's garden,  and I'm only there once a week, it's not bad, eh? 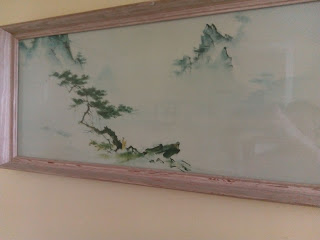 And in case you are wondering, this was the inspiration for the project: a Japanese print belonging to the Client.

So there you have it: how to take an anonymous conifer blob and turn it - over a couple of years - into a thing of Japanese style and beauty!

Posted by Rachel the Gardener at 17:19