How to do topiary to Ceanothus

Topiary is not just for Yew and Box: there are many shrubs which can be clipped into decorative shapes, and they don't always have to be formal boxes or cones, or strange lumpy animals. 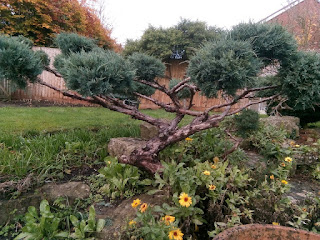 A few days ago I wrote about a Juniper which I've been patiently Cloud pruning for the past few years (left),  and today I'd like to share a different sort of shrub which I have been working on for a few years: this time it's a Ceonothus.

There are many types of Ceonothus, it's a wonderfully varied genus: most of them are evergreen, but some are deciduous: most of them have blue flowers, but you can get white or pink ones: some flower in spring, some in summer, some in autumn: some are small, some are taller, some - like the one I'm about to share with you - can grow into small trees, if they are supported and pruned when they are young.

This means that if you really, really like blue flowers, you could have them nearly all year round!

This particular one is semi-evergreen, which means that in a mild year, they will hold their leaves all through the winter. It was planted slap up against a fence, which gave it support and shelter, so by the time I got there, it had become quite a monster, pushing itself out over the grass, interfering with the rotary washing line and swamping everything below it. 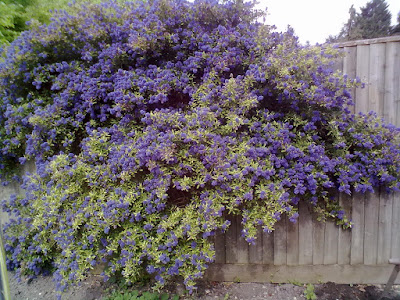 Here it is in May, flowering magnificently, but rather top heavy and in fact, one branch on the left had broken under its own weight, leaving a rather odd gap.

My original plan was to reduce it in two phases: this year I would chop off all the front-facing branches, leaving just a high canopy.

Then, when it had started to re-grow, I would chop off the top, leaving a chest-high bush, which would be much more manageable. 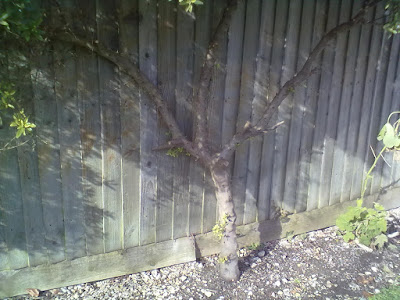 So, step one: remove all the front-facing branches.

Here we are - right - having revealed the trunk, which had not seen the light of day for several years.

To my surprise, it was rather shapely: one central trunk, soon branching into three quite nicely balanced branches.

After looking at it for a couple of weeks, I was getting to like it like this.

One day, the owner needed a dead tree removed, and I'd recommended Rob, who is my go-to-guy for all the jobs which are too big, or too heavy, for me to do, or which are going to generate a ton of waste, as he has a waste licence and a big trailer!  Rob duly turned up to have a look at the tree, and while he was there, he commented on this Ceonothus.

I explained that it was only phase one, but he said that he liked it as it was, and that I should consider leaving it.

As I had already decided that I liked it, I thought I would go with this suggestion!

Over the summer, the trunk sprouted a lot of new growth, which I removed, to keep the trunk clear. 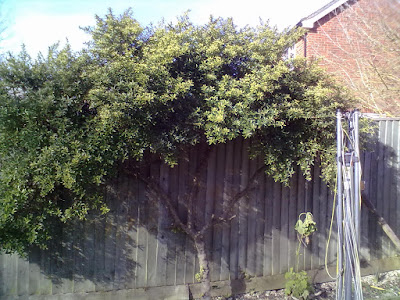 Here it is in Feb of the following year, and just see the shadows on the fence, which mean that the rest of the fence, and the bed below, are now getting the benefit of some sunlight. 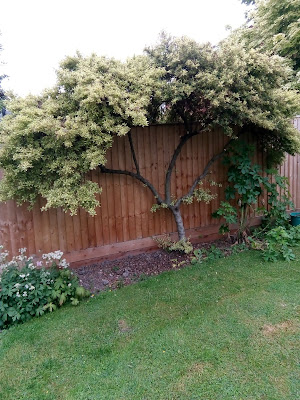 Here it is in June of this year - flowering over (it was wonderful!) and looking a bit pale, so I gave it some general Growmore feed.

You can see a few bits of regrowth at the base, they had to be cleaned off, and I trimmed out a few of the dead sections in the upper canopy while I was there.

I had also noticed that the canopy was a bit unlevel  - the left-hand side was lower than the right, so I adjusted that.

You might also be able to see that now there are plants growing underneath it: some nice white Astrantia on the left, and some lush deep red hollyhocks on the right.

Those hollyhocks are actually a wee bit too tall to fit under the canopy (remember, I originally planned to remove the canopy and make it back into a bush), so they are going to be moved next year. 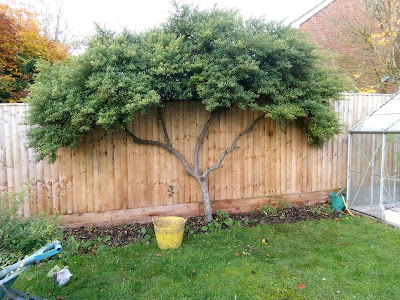 And finally, here it is as of last week: it had sprouted a tangled mass of growth at the base, so all that had to be cleared away again, and now you can see how level the canopy is.

Everyone who visits the garden admires it, and now that the bed below it has recovered, I can think about what to plant underneath it, to extend the season of interest in this rather neglected corner of the garden.

For the time being I've moved a lot of Hollyhock seedlings in there, just to keep them safe until I can see if they will come true from their parent and be a beautiful dark red, or whether they'll come up in any-old-colour, which is always the issue with open pollinated hollyhock.

So there you have it, topiary is not just for Yew and Box!

Update: Here it is, flowering in May of this year: 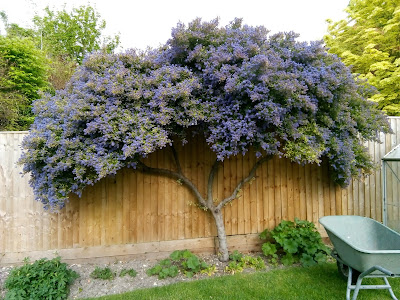 The Hollyhocks underneath came up well, although the original one on the far right was too tall, as I've mentioned above.

So I will be moving the Hollyhock over the winter, and I'll be thinking about what else to underplant.

The border is still a bit "skinny" there, so I might widen it, maybe put in a nice curve, or maybe I'll keep the straight edge, but give it another foot or so, which will allow me more space for underplanting.

Did you enjoy this article? Did you find it useful? Would you like me to answer your own, personal, gardening question? Become a Patron - just click here - and support me! Or use the Donate button for a one-off donation. If just 10% of my visitors gave me a pound a month, I'd be able to spend a lot more time answering all the questions!!
Posted by Rachel the Gardener at 08:51