How To: Grow Your Own Avocado

Having just read that title again, I'm not sure if avocado has a plural... avocadoes? Avocadi? Avocadia?

Anyway, you know those avocado things: lots of firm flesh, enormous great solid seed in the middle. technically a fruit, but usually eaten in salads, so we think of it more as a vegetable.

If you've ever fancied growing your own, you might have searched for "how to germinate avocado" and seen lots of pictures of the gigantic seeds, pierced by toothpicks, hovering over a glass of water.

Seems like a bit of a faff, doesn't it?

The easy way to do it, is to simply throw them out onto your compost heap.

A year later, your gardener will spot the 18" high seedlings in the old, set-aside compost pen, and will gleefully seize upon a training opportunity.

Trainee looks at them, then looks back at me with big piteous eyes. I smirk, and take pity: "Here's a clue, they are tree seedlings."

Trainee:  "Um, are they Sweet Chestnut?"

Me: "No - but that was a very good guess," (We have a nursery bed, containing a dozen Sweet Chestnuts, and the leaves are indeed somewhat similar. Never wanting to miss a chance at some botany, I dragged my Trainee off to the nursery bed to compare and contrast the two leaves. We agreed that they were similar, and noted that the Sweet Chestnut leaves are longer, have very obvious sharply toothed margins, and are somewhat narrower than those of our mystery seedlings. End of botany lesson.)

Trainee: "Well, what are they, then?"

Me: "I had assumed that they were Laurel seedlings (Cherry Laurel, Prunus laurocerasus), as the compost pens are overhung with Laurel, but looking more closely, I can see that they aren't."

Trainee:  "How do you know that they aren't Laurel?"

Me: "Because Laurel leaves are thick, very glossy, kinda waxy-looking, and they have a lot of very small, regular teeth along their margins, whereas the leaves on these seedlings *points* have virtually no teeth, and the margin is somewhat wavy. Plus, they are nowhere near as glossy, or stout."

Me: "When faced with a tree seedling, and having ruled out the obvious candidates, sometimes we can get another clue by digging them up: a lot of seedlings will still have the seed attached - hazel, for example, horse chestnut for another - and you can often identify the seed, even if you don't recognise the leaf."

So we gently dug up the clump of four seedlings, and as I shook off the compost, we could see the remains of the seeds around the base of the seedling.

Trainee: *staring at me in total admiration* (no, not really, just looking mildly impressed) "Avocado! Really?"

Me:  "Yup!  We find them all the time on compost heaps, people throw out the skin and the seed into their veg waste bucket, and fling the lot on the compost. And as far as the seed is concerned, being plopped onto the compost heap is much like being planted, so they grow." 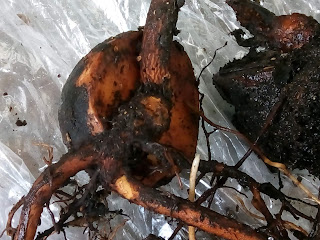 Here, left, you can see that the seedling is still firmly stuck to one half of the large seed.

One of the others had both halves of the seed in situ, but broke apart as we lifted it, but it was clear to see how the huge seed splits down the middle as it germinates, and how eventually both halves drop off, as they are no longer needed.

So what shall we do with our four Avocado seedlings, then?  Well, we decided to make it into a challenge: we would each take two of them home, pot them up, and see who could get one or more through the winter. 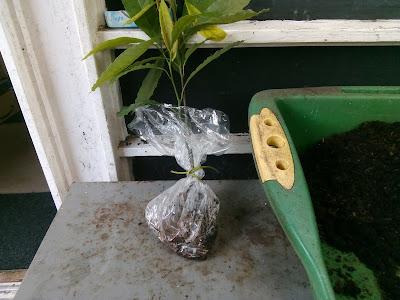 This - right - is my standard way of transporting seedlings: I re-use plastic bags (preferably ones without holes in them...) and put the seedlings into the bag, sometimes with some soil, sometimes not: add a wee drop of water to ensure they will stay moist for a couple of hours, then tie the bag gently around the stems, to keep the soil/water in, and to make them easier to handle.

Here we are at home, in my porch (where I do all my potting up), with a potting tray already containing compost. 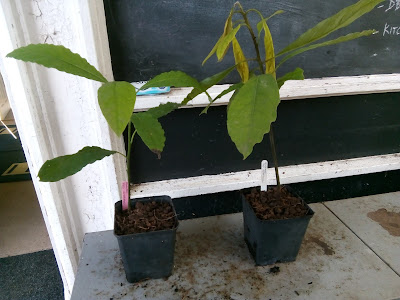 All I have to do, then, is carefully undo the tie, tip out the two seedlings, carefully separate them, untangling the roots without breaking them, and then pot up each one in a small pot: here, I used 9cm pots (which is 3½" in old money), as they were just big enough for the roots, but not too much bigger.

Why such a small pot? Because we are approaching winter, so the seedlings will be going dormant very soon, which means they won't need lots of room for root development in the near future.

And if you pot up into too large a pot, there's a risk that the compost will go "stale", which is not good for the plant. It's not like being planted in the ground, where there are worms, bugs, beetles, you name it, all burrowing around and churning over the soil: in a pot, the soil (or compost) just sits there, undisturbed, so unless the roots are actively growing, the soil can become stale.

That's why we have to "pot on" every so often: it might seem like a waste of time ("can't we just shove it into a big pot to begin with?") but plants will grow better if regularly potted on, not least because at each potting on, they get a dose of fresh nutrients from the new compost, and we get a chance to check that the roots are growing nicely, and that there aren't any unwanted livestock in the pot.

Right! The seedlings are potted up, they are labelled, all I have to do now is water them, then put them out in the garden, and leave them, to see if they make it through the winter.

And if they do? Will we just plant them, somewhere?  Well, they are not exactly common in the UK, because our climate isn't usually warm enough to produce a crop, but it is not unknown for avocado trees in sheltered locations to actually produce some edible offspring. So yes, if they make it through the winter, they will either be given to someone with a conservatory or orangery (posh word for "conservatory with plants growing in it"), or planted in sheltered spots, in the hopes that - one day - they might produce something edible!


Did you enjoy this article? Did you find it useful? Would you like me to answer your own, personal, gardening question? Become a Patron - just click here - and support me! Or use the Donate button for a one-off donation. If just 10% of my visitors gave me a pound a month, I'd be able to spend a lot more time answering all the questions!!
Posted by Rachel the Gardener at 15:53