Back in late February, I was asked to tackle an enormous overgrown Fig. 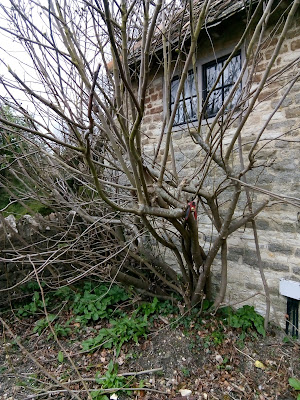 Bit of an untidy monster, isn't it? (I have included Secateurs For Scale, but frankly the upstairs window is probably good enough)

And this is without leaves!!

You can see why it needed attention - it had grown over the window, over the roof, over the path, over the bed, and was making a bid for freedom over the low wall, so it had to be tamed.

Now, "received wisdom" says that you can't prune Figs during the winter, as they will "bleed" , ie leak sap, to death.

I was a bit concerned about this, so I asked advice from my PGG colleagues (Professional Gardeners' Guild) and was told by at least a dozen people that it was simply impossible to prune a Fig in Feb/March. It would die.  It would bleed to death.

One voice of reason - there weren't many of those in the PGG, which is one of the three reasons why I'm not renewing my membership - suggested cutting one good-sized branch to see what happened.

Now, this seemed like a sensible suggestion: it's all very well for these estate gardeners to mindlessly repeat the old advice, but sometimes, out here in the real world, we have to do things at the "wrong" time of year, because our Clients want it done. And I have found, over the years, that there are many, many times when what "everyone says" is not actually accurate.  More of that later.

So, back to our Fig: my trainee and I tentatively sawed through a biggish branch, sat back and watched it.

No dramatic flood of sap. Actually, not even enough to drip to the ground, just a slight dampness. In case it was slow-moving sap, we went off and did other jobs for a couple of hours, then checked again: nope, no bucket-fulls of sap all over the ground.

So we pruned it. I had already told the Client that by pruning it in March, we would probably lose all the crop for this year, and they were ok with that, mostly because last year they couldn't get to any of the fruit: all the fruit was way up there, high out of reach. They wanted it reduced to chest-height and wall-trained again, so that they could just walk up to it and pick the fruit.

In case you didn't know, received wisdom - and all the books, and the internet - states that Figs fruit on last year's wood: technically, towards the end of our summer season, they produce tiny embryo fruits, which swell and grow the following year. By cutting off virtually all the "old" wood, we would end up with a lot of green leafy growth this year, but no fruit.  Sometimes, these sacrifices have to be made... the alternative is to spend the next 2-3 years gradually pruning the monster back into shape, doing one third of it each year.  This is actually the preferred method, it's kinder to the plant, but in this case the Client just wanted it over and done with, and accepted one year without a crop.

(In fact, there's always a risk when doing a massive prune, that the tree/shrub might die of shock altogether. In which case you have to buy a new one and start again, which in this case would not have been a bad thing, as we would have been able to wall-train it right from the start, which is a great deal easier than wrestling over-stout limbs into the required position.)

So we got out our pruning saws, our heavy-duty loppers, and we set to work.

First we cut off as much of the breastwood - ie the stuff sticking out at right angles to the wall - as we could.

That made quite a difference.

Then we crawled in on hands and knees, and sawed off all the big branches which were shooting out horizontally at ground level. 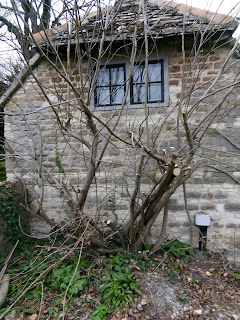 Next we tackled everything which was overhanging the wall to the left: all those were chopped off without mercy.

We discovered that the original plant had suckered a few times, so there were many stems arising from ground level.  This is not a bad thing: it means that, no matter how much we chop off, there's a good chance that much of it will regrow.

Having taken off those branches which we definitely did not want, we assessed what was left - on the left - and tried to work out which branches would be amenable to be being tied in to the wall.

The answer was, "not a lot!" as they were very much fixed in their positions, and were not minded to be bent.

So we chopped them all off. 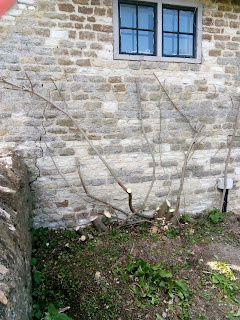 Half an hour later, this is what we had reduced it to:

We have half a dozen thinnish branches, arranged in roughly a fan formation.

That was back in March. 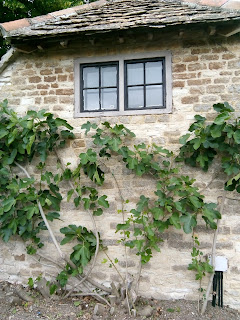 Recovering well, nicely covered with leaves, and in fact I had to tidy it up a bit for this photo, as some of the new growth was a bit over-enthusiastic.

Likewise, a lot of the very low branches which we cut off were trying to sprout, so they have to have their new growth rubbed out, just as you do with epicormic shoots on trees. These were mostly between  5-10' away from the wall, and we don't want more Fig growing up there! That's where we want to stand, in order to pick the fruit. 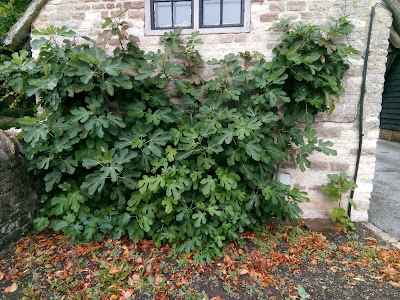 Throughout the summer it grew and grew: in fact, in late August I had to trim it back again.

And this is what it looked like today - first of October.

Quite lush, isn't it?

So, what are the "mythstakes" that have been disproven by this plant?

Firstly, Figs Can't Be Pruned In Winter. Well, technically I'd call March "early spring", but it was jolly cold this year, and I'm sure many of the heat-sensitive plants (as opposed to day-length-sensitive plants) would agree that this year, early March was still part of winter, thank you very much.

Either way, you can definitely prune a Fig on a cold east-facing wall, in late Feb/early March, as long as you accept that you won't get any usable fruit from it this year.

Secondly, Figs Only Fruit On Two-Year-Old wood. Simply not true, the above plant is covered in biggish fruits. None of them are likely to ripen this year, as they have been shielded by the lush over-growth of leaves, which I didn't bother to prune back, having assumed that there would not be any fruiting at all this year.

But they are definitely not the "embryonic fruits" which all the books mention - no, these are good-sized fruits, it's just a shame that they are mostly still green and unripe.

So there you have it - two myths about Figs disproved in one article.
Posted by Rachel the Gardener at 15:26