How to: create a Hedgehog Highway

This topic is very much "on trend" at the moment: people in towns are becoming aware that we are losing vast numbers of our hedgehogs, and are trying to take steps to help them.

Generally speaking, this is a good thing: as long as people realise that hedgehogs put the "wild" in "wildlife": they are not cute, cuddly, tame things - they are actually wild, outdoor critters, and they do NOT make good pets!

They have spines, fleas, big claws, and they poo incessantly. Ask anyone who feeds hedgehogs in their garden - the amount of messy poo on the patio is quite incredible! 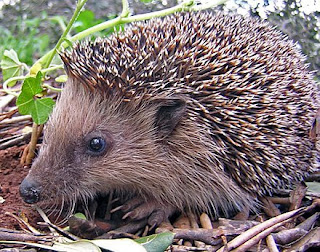 They are pretty much browny-grey in colour: they have little piggy eyes, smallish ears, set well baack on their heads, and - and this is the Big Clue - look at those enormous feet and claws.

These are used for digging: wild hedgehogs dig burrows, they dig for food, so they have big claws.

They are nocturnal, which means that they start to get active, and interesting, just as we are settling down for the evening.

Most of the "cute" pictures of hedgehogs which you will see on the internet are not wild UK hedgehogs at all, they are African Pygmy Hedgehogs, which are very popular in the US as pets (and I have every expectation that they will find their way into the UK as pets as well, depressingly...). 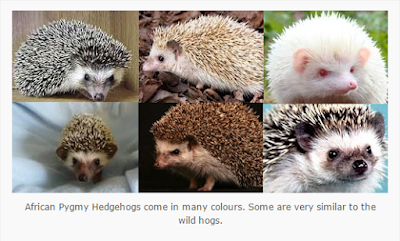 Note the white underneaths, the white faces: our wild hedgehogs are usually - not always, but usually - just plain brown or grey.

Note also the bigger ears, set rather higher on the face, giving them that cute "nearly human" look.

Many of them have the darker "mask" on their faces, but - the biggest giveaway - look at their teeny tiny feet.

That's because they come from Africa (bit of a clue in the name, huh?), where the soil is light and sandy: plus, they are scavengers, rather than hunters. So they don't need hulking great claws.

There are two other facts about African Pygmy hedgehogs (and yes, they are considerably smaller than our wild ones, but that's tricky, because for all you know, you are looking at a young, wild one...) which are extremely relevant, but unfortunately, invisible.

1) they are not resistant to wild hedgehog diseases. So if they meet wild hogs, they will probably get ill, and may well die.

2) they need to be kept at a temperature of at least 22 degrees - Africa, remember? - so if they are left outside in the UK, or released into the wild, they will die. They. Will. Die.

The only good thing about it, is that they are a different genus (Atelerix albiventris) from our wild hedgehogs (Erinaceus europaeus), so at least they can't interbreed.

So, getting back to wild Hedgehogs, what can we, the UK gardeners, do to help these little guys?

First and most obvious, don't feed them! Far more Hedgehogs die from being fed the wrong food, than from starvation. There is a mass of contradictory information on the internet, as to what is the "correct" food for wild hogs, just as there is for feeding the ducks:  but the bottom line is that these are wild animals, and we should not attempt to semi-tame them by feeding them, for our entertainment.

Yes, I know that they are adorable to watch, as they bumble around on your patio. I often have close encounters with Hedgehogs in my open porch (why do they lurk in my porch? why? why? I have no idea), and I always enjoy seeing them, but I don't feel the need to have them put on a Busby Berkely style routine, so that I can sit there and watch them for an hour.

I can hear you shouting at the screen "but we are saving them!". No, you are not. Putting out food for wild hogs disturbs their natural lifestyle, in several ways.

Firstly, you are forcing them to come to a particular spot, at a particular time: in unnatural quantities. How many videos have you watched, on the internet, of hogs fighting over the food dishes? Oh yes, very amusing to watch, but you are putting these normally quite solitary creatures into larger groups, which leads to disputes, over-crowding, and disease.

You are also making them vulnerable to predators:  yes, Mr Fox will also learn that you put out food every night, and he'll happily eat the food, and will also eat any fat little hogs which you have trained to step into his parlour.

And what happens, on the day that you get bored, run out of food, or go away on holiday? Suddenly, there is an unnaturally large population, and their main food source has disappeared. They. Will. Die. You have forced them to become dependant on you, and if you fail them, for whatever reason, then they will struggle to re-establish an ecologically sound population.

And, of course, they'll struggle all the more because, if you've been feeding them, they will - to some extent - have lost their natural hunting and food-finding skills.

It is far better to encourage Hedgehogs to enjoy your garden in an appropriate, "wild" way, and the simplest, cheapest, and possibly the single most helpful thing that "one" can do for wildlife, if "one" lives on a housing estate, is to help to create a Hedgehog Highway.

This just means cutting the occasional hole in your boundary fences: small, ground-level holes in the fence, no more than about 5" (13cm) high and wide, and preferably in a slightly tucked-away location. Round the back of the shed is perfect, or under the sheltering overhang of a shrub.

And what a difference it makes! It can suddenly change a run of gardens from being a row of sterile boxes, into a linear highway, for hedgehogs and other small mammals.

Here are a couple of examples, pinched off the internet: 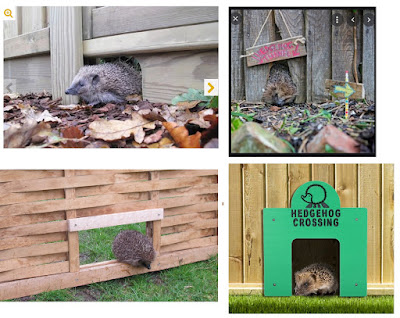 Some are custom-made, which is fine - and I rather like the rustic one, where they have just made use of a damaged slat, in the boarded fence.

Even just scraping out a low scoop under the bottom board of the fence will help.

Yes, the local cats will probably also use them, but they would otherwise climb over the fences anyway, so it's not as though you were opening up anything new to them... and it's a small price to pay, for creating connected environments for our wildlife.

I particularly like the bottom left one - the slatted fence. This is a timely reminder that Hedgehogs have surprisingly long legs, and can manage steps quite well.

They can also run astonishingly fast: if you've only ever encountered them unexpectedly, you might think that all they do is stand very, very still, until eventually, if you wait long enough, they might shuffle off, in an embarrassed fashion.

(Side note: once, encountering a particularly large specimen in my open porch, I stood there to watch him, because I wanted to know what he was actually doing, in my porch. I stood there, looming over him like the Statue of Liberty. He stood there, motionless. We both stood there. For some time.  Then he sighed. Honestly, he huffed out a loud, rather bored, sigh: the sort that is normally accompanied by rolling of the eyes. So I retreated gently indoors and left him, the victor in that round.)

However, catch them on a good day and they can sprint like good 'uns: apparently they have been clocked at doing 9mph!! 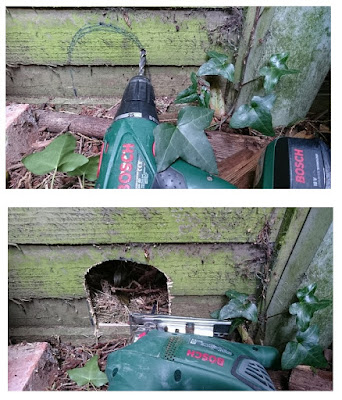 The quick and easy way to make a Hedgehog hole in an existing fence is to mark out a shape on the fence, then take a drill, and drill a biggish hole.

Then get a jigsaw, and put the blade into the hole you have just drilled... then use the jigsaw to cut the hole.

It doesn't matter if it's a bit rough, or mis-shaped: the Hedgehogs won't care!

If you have chain-link fences, then you could try inserting a short length of pipe: 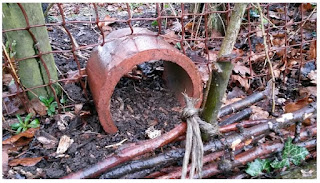 Here's a picture I found on the internet - left - of a very nice little mesh-fence tunnel, perfect for small mammals.

(Although  I don't think my massive sighing Hedgehog would fit through that pipe, to be honest!)

Having made a few Hedgehog holes in your fences, try to encourage your neighbours to do the same, so that the hogs can move around a larger territory, which gives them wider hunting areas, provides escape routes from predators, and prevents overcrowding.

There you go - simple, isn't it?  A very small, cheap change, which can have a huge impact on the health and freedom of Hedgehogs.

Did you enjoy this article? Did you find it useful? Would you like me to answer your own, personal, gardening question? Become a Patron - just click here - and support me! Or use the Donate button for a one-off donation. If just 10% of my visitors gave me a pound a month, I'd be able to spend a lot more time answering all the questions!!
Posted by Rachel the Gardener at 10:51