Strimmer? I am never using one again, ever!

And why not, you ask?

Answer: I have a modern Austrian Scythe, bought a couple of years ago - err, actually, it's now several years ago! -  for using at weekends when out volunteering with my local canal restoration group. Then, the following year,  when I started getting the usual requests from clients to bring my strimmer for specific jobs - one client had a mass of nettles, several of them have wildflower meadows, then there's trimming the rough stuff around trees, in the orchard, under benches and so on - instead of the noisy petrol strimmer, I took along my scythe and did the jobs with that: I was really impressed with how easy, quick and quiet it was, and the quality of the job was no less than it used to be with a strimmer.

I have always hated using a strimmer, due to the noise, the stinging splatter of bits up your legs, the need for a steaming-up visor, sweaty gloves and ear-muffs, the noise, the smell of petrol - oh, did I mention the noise? Not to mention having a car than stinks of petrol for the rest of the week. 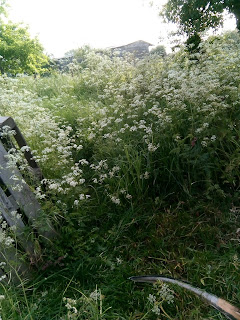 My scythe may be a little slower, but it's silent (nearly), so I can do it as early in the morning as I like, without frightening the neighbours: it cost no more than a decent quality strimmer, but it doesn't use any fuel other than my energy and some water, and is in fact very nearly cost-free to use. When I use it, I can hear the birds singing, I can wear shorts and bare hands.

To be fair, it does take a little while to learn how to use it, and how to sharpen it, but not long, and you don’t need to be “expert” in order to do a perfectly acceptable job.

As an example, here - left - is a rough area which needs attention once or twice a year. As you can see, it has breast-high Cow Parsley, but what you can't see is the underplanting of thistles, burdock, and what-have-you, which used to foul the Client's own strimmer. 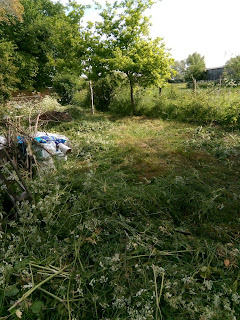 Twenty minutes later, it's all lying flat on the ground, ready to be raked up and stuffed into the compost pen.

People always ask “how fast is it, compared to a strimmer?"

That's the wrong question, for several reasons: firstly, it's not a competition between one and the other. There is no competition, in my view: I will never use a strimmer again, I will be using my scythe instead. (NB, "For Sale, Petrol Strimmer, contact me for details.") (Joke: they were both sold, within a year of getting my scythe.)

Secondly, it's not about speed, it's about enjoying the work rather than sweating yourself to death inside protective clothing, terrifying the wildlife for miles around, and setting teeth on edge in all the neighbouring houses. And there is an incredible sense of self worth, to be using your own muscles to do a job that other people need petrol and complex machinery to do.

Thirdly, I have never, EVER, had anyone come up to me and start chatting while I was strimming. Dogs would yap, babes would cry, windows would shut, but no-one ever stopped me to talk about it. Scything, on the other hand... everyone and his dog wants to have a closer look, ask "why are you not using a strimmer?" and tell me stories about their great-great grandfathers… which sometimes means that it can take a little longer to get the job done.

Fourthly, a scythe will go through wet grass with no problem, which compares very favourable to a strimmer: no more chewy messes of mashed greenery clogging up the head.

And fifthly, need I say it? In these days of eco awareness, and wildlife consideration, it seems that turning to the scythe is an obvious step to take.

So how long does it take to learn, and to use? The friend who showed me his (stop laughing, I can hear you) gave me a ten-minute lecture, a quick demo and then let me have a go, correcting my stance as we went. I then bought my own one, and went on a one-day course, which was great fun: and now I am perfectly competent.

I won't win any competitions, and I certainly don't leave it looking like a manicured lawn, but having just watched a local company hack their way, with strimmers, through one Client's meadow, then spend hours raking up the mess afterwards, I can truthfully say that I am no worse than they are.

It takes barely a minute or two to set it up or pack it away: it’s so sharp that it goes through nettles, burdock, thistles, young plum root suckers (memo to self, watch where you’re going…) and things which my strimmer used to leave as ragged stumps: and it leaves the cut grass in neat rows instead of flinging it all over the place.

You do have to rake up the cut grass afterwards, but hey, it's a crop! Let it dry out, and you certainly won't need to buy hay for the guinea pigs for a year or so.

Now, I don’t want to get started on any eco-warrior, hippy-chick rubbish about being in tune with Mother Earth etc etc, but I really think that more of us should consider casting aside the two-stroke smoke-screen and the ear-splitting strimmer whine in favour of the scythe: we’re all a bit quick to reach for the power tools these days, but there is a massive satisfaction in gently swinging a tool which is ancient, but which is so well designed, which gets the job done, uses no petrol, and which attracts so much positive attention.

And the down sides? Just three of them, so far:

Firstly, you are using a very, VERY sharp blade: in use, the only real danger is to onlookers stupid enough to stand behind your left shoulder, but honing - every ten minutes or so - needs care, as does walking around carrying it.

Secondly, the scything is the easy bit, it's raking up all the grass that takes the time.

And thirdly, you get a lot of Grim Reaper jokes!