Recently I wrote about installing plastic edging to a lawn: that was followed by an article about using Victorian rope-top tiles: and today, we are talking about an even cheaper way to create a similar effect, ie using tatty old house-bricks.

This is something you often see in old walled gardens: a row of pointy-top brick edging.

It's actually very simple to do, but there are a couple of Top Tips to pass on.

Here's what I'm talking about: 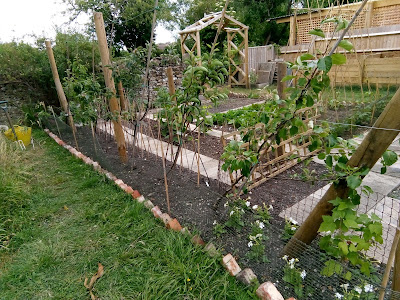 There - isn't that nice?

It's charming, it's rustic, it's very much "in keeping" with the vegetable garden style...

It's also very cheap to do, being basically a pile of old house bricks that were lying around behind the garage.

But, as always in life, there is just a little bit more to it, than first meets the eye.

If you just push a load of house bricks into the soil, you'll find that they won't look neat for long: the mower will either leave a strip of ragged uncut grass, or will "bunt" them out of line: odd bricks will fall over, leaving an "All I want for Christmas is my two front teeth" sort of effect: and grass will grow through the bricks and invade your veggie patch.

So what's my Top Tip for this arrangement? Answer, a mowing strip, of wood. 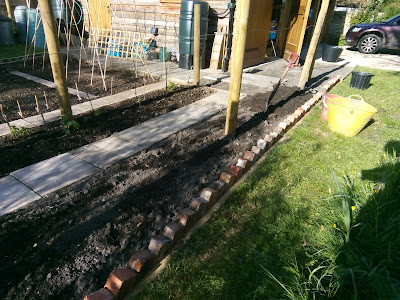 Here's the same run of edging, taken from a different angle - right - just after cutting the grass.

It shows the mowing strip - there is a piece of solid timber lying alongside the bricks, sunk down so that it is just barely below the level of the grass.

This makes it pretty much invisible - well, you couldn't see it in the photo above, could you? - but allows the mower to run quickly and easily along that edge, cutting all the grass, and not bumping the bricks out of line.

Grass can't easily grow through the bricks, because there is a solid chunk of wood holding it back.

And the wood also helped the handyman to install them in a good straight line, so they look smart and stylish, rather than looking dilapidated and run-down, which can easily happen, once they get a bit higgledy-piggledy.

So, if you are thinking of adding this sort of rustic edging to paths, beds, borders, or a veg garden, start by assembling a large pile of bricks, and get yourself some long lengths of old timber: pressure-treated outdoor timber will last a lot longer than un-treated, but you have to accept that this is not a long-term installation, and the wood will need to be replaced every few years.

The timber needs to be quite chunky: here, we used leftovers from another garden project, which were about that wide (holds finger and thumb up, indicating about 2½") and about that deep (this time, full stretch of hand - about 5") and were enormously long, which made it much easier to install.

Next, take your half-moon edger (if you have one - if not, just use the flattest, least-curved spade you can find), and cut the edge: you can lay the timber out, to help you get a straight line. Cut a good deep "cliff edge", and lift out the soil in a trench.

Right, now you can sink the timber in place, until it is just below the level of the grass. Any higher, and the mower will keep scraping against it, so make sure you dig the trench deep enough. If you have to use more than one length of timber, then it is a good idea to join them together: the simplest way is to use a metal joining bracket, screwed across the join. The screws (and possibly the bracket!) will go rusty quite quickly, but that won't matter because they will be buried below soil level, so you won't see them.

Now, start adding bricks: go to one end or the other, find a half-brick, and bury it vertically, so that the top is just above ground level. Then place your first 45 degree leaning brick, such that at least half of it is buried below the level of the timber, and so that it is resting on the buried half-brick. If you don't do this, the whole lot will gradually lean over...

Once the first brick is correctly positioned, work your way along, leaning each brick on the one before, and taking care to get their tops all at the same level. It's often easiest to tip some loose soil into the bottom of the trench, and gently tap each brick with a wooden or rubber mallet, to get the right height.

Once you have seven or eight of them in place, start backfilling with the soil from the trench, packing it firmly around the buried portions of the bricks.

When you get to the end of the run, just stop: pack more soil around the end brick, and there you are, all done.

Curves are a bit more problematical: it's not particularly difficult to lay the bricks, as long as your curves are quite gentle, but without a mowing strip, you will find that the problems mentioned above will occur. So really, this method is best used for simple straight edges.

There you have it: a nice afternoon project!