OK, not really part 27, it just feels that way.

A couple of days ago, I had a comment from Virgil ("Hi, Virgil!") about using dubbin to waterproof leather work boots, which prompted another article on the subject: and while going through a backlog of photos,which were in the folder marked "might be useful for future articles", I found a whole set of photos of my attempts to use Beeswax.

In an earlier article, I had received some criticism of the state of my boots:"you can't expect to waterproof cracked, dried, boots," they said. "You really need to feed those boots!" they cried, in horror.

And my method was also criticised: "Heat is essential!" they all shouted at me, "You have to warm up the beeswax with a hairdryer, to get it to soak in properly."

So,  a couple of years back, I apparently tried again, using a new pair of boots,  and here is the result. 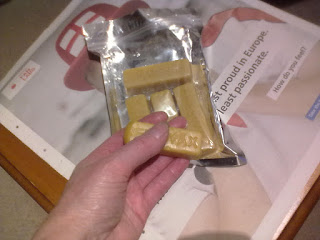 Put them into a large bag, and squeeze them until the wax starts to run out - a rolling pin can be useful for getting the last few drops out.

Easily obtainable via the internet!

Warm it up until it melts: a candle-making double pan is good for this, or put it in a metal bowl over a saucepan of gently boiling water.

Don't use your fondue set, or your chocolate-making equipment: no matter how much you wash it, it will taste of wax forever after. Yes, I know beeswax bears a close relationship to honey, but trust me, it's not the same thing!

Once it is runny, apply it to the boots: be careful not to burn yourself on the metal bowl, or on the liquid wax: be sensible, use a cloth until it's cool enough to do it with your fingers.

Yes, fingers are the best applicators, otherwise the wax soaks into the cloth or sponge. 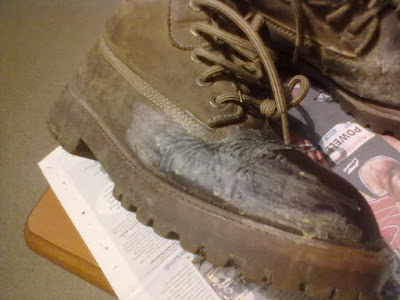 Here - right - we have the smeared-on, rubbed-in wax already starting to cool and dry, so at this point, out comes the hair-dryer, to melt it again.

This causes the wax to sink into the leather, which is where we need it to be.

I repeated this step several times, until the leather was gasping "Stop! Enough! I'm full up!", and at that point I let the boots cool down, and then buffed them with a clean cloth. 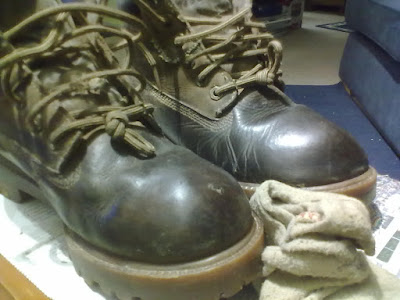 Now this - left - looked promising: the boots now had a shiny shell on them.

Just in case, I repeated the process one more time: more melted beeswax, more hair-dryer action, more rubbing: then a final buff with the soft cloth.

Ah, but would it work?

In case you're wondering why I have little loops at the lower end of my laces, by the way, it's because the laces are too long - I don't lace them up to the top hole, because of all the bending-at-the-ankles which I do - and if I just tie them as they are, then they drag on the ground and get wet and muddy.

But I can't just chop a bit off, because then they'd fray.

So I work out how long I need them, pull the excess down to the toe end of the lacings, and tie it in a knot.

This has the additional benefit that the laces remain centred:  you don't end up with one loose end longer than the other. Top Tip! Even if your laces are the right length, tie a knot at the middle point, then re-lace them! 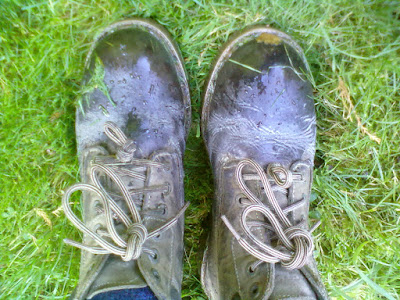 Right, getting back to the boots..

Here we are, quite literally out in the field, and about two hours into the morning.

The toes are wet, but shiny-wet, rather than matte soaked-wet.

The apparent cracks and creases are where the beeswax is working its way out of the leather, where the boot bends.  Slightly weird... no-one mentioned that, on any of the internet research I did, before attempting this. 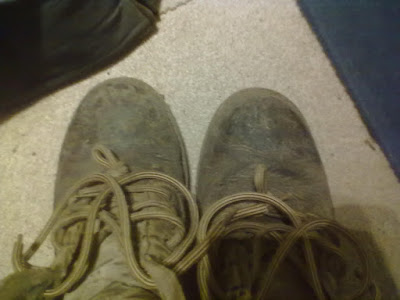 Two days later, ie after two days of wearing them, the beeswax is all migrating out.

So my boots look like nothing on earth, considering they were new, two days earlier: they are coated with crusty beeswax, which was dropping off in all directions, and getting up my fingernails - urgh! - when I handled the boots.

I tried using the hair-dryer again, to melt it back in, and then to buff them to a shine again, and it worked, sort of: but again, after a day or so of wearing them, they looked like this.

And I had wet toes again.

So, where does that leave us?

Beeswax, in my opinion, does NOT work to make leather boots waterproof. Not for longer than a couple of hours. And it took me two evenings of hard work to get them waxed in the first place.

On balance, then, I'm sticking with my current regime of alternating between two pairs of boots, changing them at lunchtime if necessary: allowing each pair to dry, then applying any old handcream to them, to keep the leather soft and supple.

If you have any further questions or suggestions, I'd be happy to hear them: but please,  to that person who persistently tries to add robotic comments with clickbait links, to any article I write which mentions waterproofing boots - give it a rest! *laughs*