Germinating Monkey Puzzle: how to grow Araucaria araucana from seed.

Back in August of last year, a kind friend gave me a dozen enormous Araucaria araucana (Monkey Puzzle tree) seeds: they are fully 2" long, probably the biggest seeds I have ever seen.

Having done a little internet research, I decided to germinate them using the ice-cream tub method, so I filled an old ice cream tub with clean new compost, nicely dampened but not soggy,  and pushed all 12 seeds into the compost, point first. I then lay the lid on top - but leaving it loose, not clipping it on - put the tub in front of the window, and let it get on with it.

Apparently the idea is to check every week or so by gently lifting one or two of the seeds, to see if they were germinating; if not, to gently replace them in their socket. 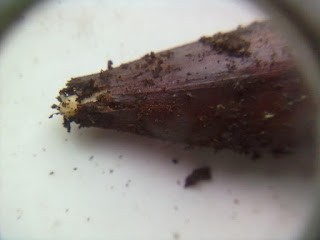 You can just see that the new root is starting to split the outer cover of the seed.

This means that the seed has successfully germinated, and can now be potted on individually.

Two weeks later, another two had started to produce a root, so they were likewise potted up, and I kept all of them indoors (as it was winter!), planning to put them outside in late spring, once everything has warmed up.

By the end of December, a fourth one was growing well,  and in early January a fifth one was ready to be potted up individually. 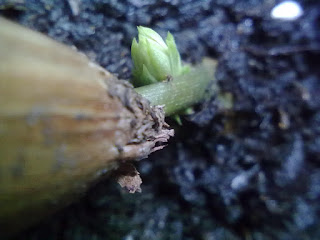 Meanwhile, the first three to be potted up were producing a tiny bundle of leaves at the base.

As you can see, there is still a large green stem going into the seed case:  I had assumed that these trees grew like sweet peas - once the case splits off, larger leaves unfold.

However, even though they are all making this strong-looking little sprout at the base, they all still having the thick green stem going into the seed. Is the little sprout the new tree? Or will the seed case yet split open? Ah, the joys of germination. 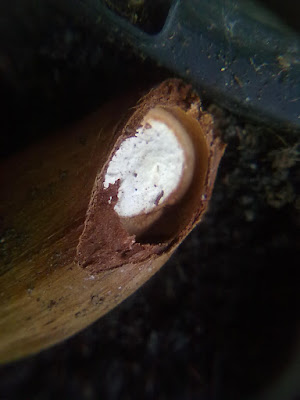 Being of an inquisitive mind, I cut one of the seeds open at the top, to see if it was now just an empty case, but to my horror it was still a tightly-packed white, fleshy mass. Eek! Have I killed that seedling? Luckily, it does not seem to have noticed, and it is now the largest of the five early ones.

Here's a close-up view of the chopped-off top of the seed, you can see the inner mass is shrinking away from the sides of the seed, but it is still firm, and is certainly not shrivelled up and dead-looking.

So should they be cut off? Are they essential to the seedling? How long will the seedlings need them?

There were no answers to be found on the internet (I can't be the only person to do this, surely?), so, putting aside these concerns, winter continued, and I continued to check the seeds in tub from time to time, and yesterday I found that another one had put out a root, so that makes 6: 50% germination! 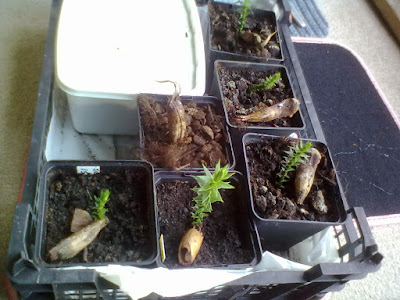 As you can see - left - the first ones to germinate are growing strongly and are 4" high: that's the new one, the light brown one in the middle, which does not have any green growth as yet. It has about 3" of thick fleshy root, but of course that is under the soil.

Of the remaining six seeds, at least two of them are showing signs of swelling and splitting, so I am expecting a couple more successes - but I am beginning to think that six might be enough, as they are going to take up a lot of space!

Already, even at this size, the leaves are strongly spined and sharp to the touch.

And as for the "should I chop off the seed pod" debate, well,  I observed the following: 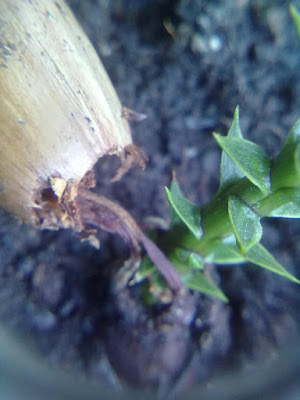 ... yes, one of the strongly-growing ones is finally showing a shrivelled-up seed stem, so it clearly no longer needs the seed.

It therefore seems likely that it is best to leave the seed joined by the green stem until such time as the stem goes brown, at which time it can safely be removed.

Maybe, if one more germinates, I will sever the seed stem as soon as the plant produces some proper leaves, and see if it has any effect on the growth of the seedling.

Posted by Rachel the Gardener at 09:59