Oh, it's a wonderful, scary, spooky thing: not to everyone's taste, and I'm sure that in years to come I will regret planting it, as once established, it can be quite persistent: but I love the mad, spotted sheaths of the new growth. 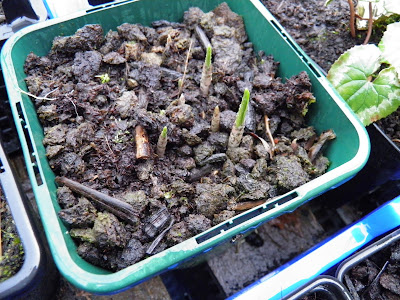 Here's an established potful, just starting to poke their noses above the soil - quite brave of them, considering the filthy weather we've been having recently.

I mean, we are now into March, it's officially Spring, and I'm not back in shorts yet! 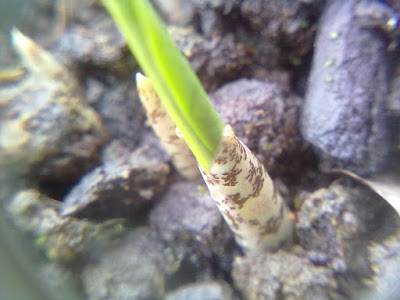 Just look at the beauty of that spotted sheath - lovely, isn't it?

Combined with the fresh green leaves, I find this irresistible. 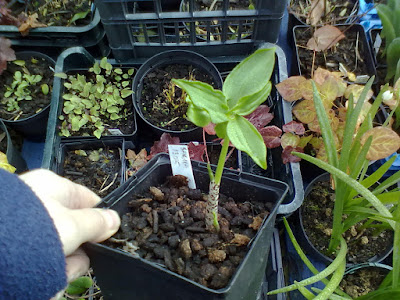 This - left - is what they'll look like in a couple of weeks' time: aren't those leaves just lovely?

The only other plant I know with three-part leaves like this is Trillium, and I have never been able to grow them in any of "my" gardens as our soil is not sufficiently acidic around here: I'm still searching for a garden with the right type of woodland so that I can get some of them started.

In the meantime, I have to make do with this chap instead - and who could resist a plant with such a great name? Dracunculus - with overtones of Dracula and Harry Potter - followed by vulgaris which just means "commonly found or used" in botanical terms, but still has a delicious, slightly decadent whiff of "vulgar" about it.

If you are not familiar with this plant, I'm sure you are wondering what it's going to turn into, and what the flower is going to be like: well, if you look on the internet you'll find it variously described as "well known and bizarre", "a dramatic, good looking plant", and "the most impressive of the European aroids". The common name of Dragon Lily or Dragon Arum might give you a clue: it's big, black and scary-looking. 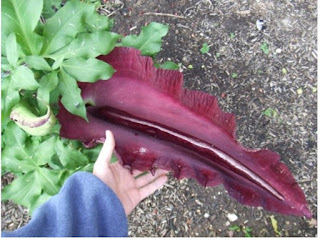 Well, ok, not black-black but in some lights... ok, dark purple, then.

I've seem them growing in the wild and attaining heights of, well, more than waist high: and the flowers can be 2' in length.

The bad news is that the flowers want to be pollinated by flies, so they exude a foul stench of rotting meat in order to attract them.

But the good news is that, once pollinated, they stop stinking!!

Now all I need to do is figure out how to manually pollinate them as soon as they start to flower...

Posted by Rachel the Gardener at 10:43